Titan God of storm and wind

Typhon, also known as the Wind Titan, is one of the Titans and a minor character in God of War II. He does not do much in the game, but just the mere sight of Kratos make him want to kill Kratos. Typhon fails to kill him, and Kratos collects Typhon's Rage before leaving with Pegasus.

He was voiced by Fred Tatasciore, who also voiced Poseidon in God of War (2005), the Persian King and Atlas in God of War: Chains of Olympus, Zeus in God of War: Ghost of Sparta, Ares in God of War III, Saren Arterius in Mass Effect, Nikolai Belinski in the Call of Duty zombie series, Draza in the multiplayer of Uncharted 3: Drake's Deception, Tony Alpert in Battlefield: Hardline, The Speaker in Gears of War 4, and Helm Hammerhand in Middle-earth: Shadow of War.

Typhon was a imprisoned within a great mountain by the Gods after the Great War ended. After Gaia instructed Kratos to travel to Typhon's Cavern, using the Pegasus, to gain some help, Typhon refused to see and help Kratos. When Kratos entered the Cavern, Typhon trapped the Pegasus with his bare hand.

Thinking that Kratos was still a servant to the Olympians and Zeus, Typhon created fierce winds and tries and blow Kratos off the cliffs of the cavern. However, Kratos managed to escape, and cut Typhon's Bane out of Typhon’s eye, both blinding him in one eye, and angering Typhon even further. With this new weapon, Kratos manage to destroy Typhon's other eye, rendering him completely blind. Before Kratos left the icy caverns, Typhon cursed Kratos by telling him he would pay for what he had done. When Kratos acquired the Rage of the Titans, he managed to free the Pegasus from Typhon’s grasp. What happened to Typhon after Kratos leaving the cavern is unknown.

Typhon is a giant blue Titan, with, what appears to be, ice covering most of his body. 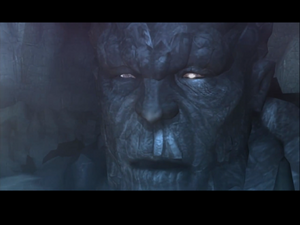