The Tyranno is one of the main antagonists of the obscure anime show Genshi Shonen Ryu (also known as Ryu the Primitive Boy in English). It is a carnivorous one-eyed Tyrannosaurus that terrorized many lives during the prehistoric times, mercilessly destroying anything or anyone in its' path.

Tyranno is an brown, obese, one-eyed Tyrannosaurus Rex and has red eyes with yellow sclera.

For some the Tyranno is revered as a god, while many others feared it as a demon; its terrible cry is enough to scare away any living being. Due to its massive size and brute strength, the Tyranno is nearly impossible to defeat as no other living being was powerful enough to challenge it, making it the most dominant predator that roamed the prehistoric lands. The Tyranno lost its eye during a confrontation with Kiba, who had been hunting the Tyranno endlessly ever since it killed his family and tribe. 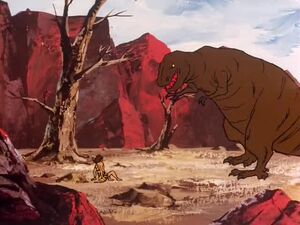 Retrieved from "https://villains.fandom.com/wiki/Tyranno?oldid=3499000"
Community content is available under CC-BY-SA unless otherwise noted.