It appears on the series Ben 10: Omniverse, when Khyber orders his huntind dog to transforms an alien that can handle on Humungosaur, and the only alien that can is the Tyrannopede.

Tyrannopede has a segmented purple and gray body and a red head resembling that of a tyrannosaurus with a horn on its forehead. Tyrannopede has four legs and six small arms with two clawed fingers on them. Tyrannopede wears a red spiked collar with the Nemetrix on it.

Being a Vaxasaurian's natural predator, Tyrannopede has bestial strength, high durability and poweful jaws, as seen as she is more than capable of manhandling a Vaxasaurian with little effort, also seen when she grabs a replica of a spaceship with only her jaws.

Tyrannopede is extremely heavy, weighing too much for Humungousaur to lift for long, also everytime Tyrannopede runs around atop of Kyber's spaceship, it would shake the entire ship.

The horn on Tyrannopede's forehead can shoot webs to trap enemies in a sticky cocoon. 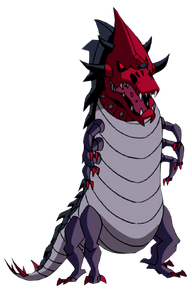