Eat whatever it can feed.

The Tyrannosaurs are the main antagonists in the B-movie series, Carnosaur.

Like all dinosaurs in the novel, the Tyrannosaurs were created by Lord Darren Penward which has found dinosaur DNA fragments in fossils and has used them as a basis for restructuring the DNA of chickens.

The Tyrannosaurus rex serves as the final antagonist in the original film. In the film, the dinosaurs were created by a scientist named Jane Tiptree by combined iguanas, crocodiles, albatrosses, vultures, pelicans, turkeys, ostriches, and dinosaurs' DNA (where the dinosaur DNA acquired from fossils) where the combined DNA eventually used to create a breed of extra large chicken. The said chicken later give birth dinosaurs, includes Tyrannosaurus and Deinonychus. During the film, sends one of his co-workers to get devoured by the T-Rex.

The Tyrannosaurus once again served as the final antagonist in the film. The Tyrannosaurus is one of the cloned dinosaurs who have been hidden in a nuclear mining facility after the events of the first film.

Near the end of the film, Jesse and Jack, the two main protagonists, go to the surface in order to take a rescue helicopter to be able to leave from the nuclear mining facility. However, they encounter the Tyrannosaurus, which immediately attacks them. Fortunately, they manage to escape in an elevator and come to the surface.

Shortly after, the Tyrannosaurus arrives by breaking a wall and devours one of the members of the rescue crew. Jesse gets behind the wheel of a forklift and confronts the dinosaur. Finally, he succeeds to push him to the bottom of the elevator shaft, killing him.

A female Tyrannosaurus is one of the three dinosaurs which have been frozen in an army convoy, along with two male Velociraptors. She is one of main antagonists in the film

However, some terrorists (whom mistaking their container filled with nuclear chemicals) attack the convoy and accidentally release the dinosaurs. They kill most of them and later goes on a massive meat shipment. The Tyrannosaurus is revealed to be pregnant and lays many eggs aboard the ship.

Afterwards, a military team led by Colonel Rance Higgins infiltrates the ship in order to kill the dinosaurs with dynamites. There, they discover the nest and begin to shoot, which causes the Tyrannosaurus to become mad and she kills some of them. Rance and a few others are then pursued by the Tyrannosaurus and hide behind lockers which the reptile head-butts. Rance finally throws an explosive in the mouth of the dinosaur, killing her. The ship explodes soon after. 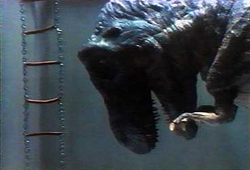 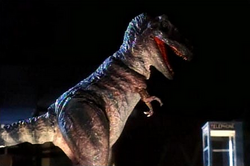 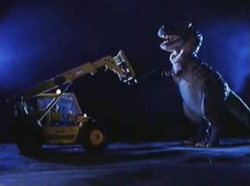 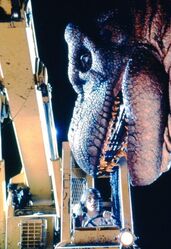 Tyrannosaurus looking down upon Jesse.
Add a photo to this gallery 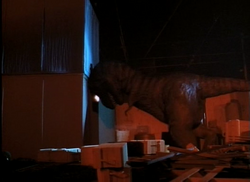 T-Rex with her eggs 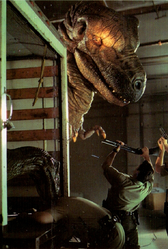 T-Rex and Raptors killing the cops in Carnosaur 3: Primal Species
Add a photo to this gallery
Retrieved from "https://villains.fandom.com/wiki/Tyrannosaurs_(Carnosaur)?oldid=4215238"
Community content is available under CC-BY-SA unless otherwise noted.