Pursuing and attacking their prey.

The Tyrants (タイラント, Tairanto) are bio-organic weapons originally engineered by the Umbrella Corporation as part of the Tyrant Project from 1988 to 1998, and recurring antagonists in the Resident Evil franchise. Created using the same T-Virus which also gives rise to zombies, Tyrants are characterized by their much larger size, more powerful physique, and greater intelligence. Several different models of Tyrant have been engineered since the start of the Tyrant Project, and the bioweapon has largely outlived Umbrella itself.

The first model of Tyrant, the T-001 or Proto-Tyrant, was unleashed in 1998 and did battle with S.T.A.R.S. member Rebecca Chambers and escaped fugitive Billy Coen before being ultimately destroyed by Albert Wesker. The improved T-002 was unleashed by Wesker in Umbrella's Arklay Mountain Laboratory and was destroyed by the combined efforts of S.T.A.R.S. Chris Redfield, Jill Valentine, Barry Burton, and Rebecca.

Umbrella eventually perfected the Tyrant with the mass-produced T-103 model, unleashing six of them into Raccoon City during the T-Virus outbreak there. One of these models, designated T-00, was assigned to recover a sample of the G-Virus as well as eliminate any surviving police officers or civilians hiding in the Raccooon City Police Station. T-00 began pursuing Leon S. Kennedy and Claire Redfield during its mission, and was destroyed by either Leon or Dr. William Birkin, now mutated into the creature known as "G." Around the same time, a T-103 model was deliberately infected with the NE-α parasite, creating the bioweapon known as Nemesis T-Type, which was deployed in Raccoon City to eliminate any remaining members of S.T.A.R.S. Nemesis was itself eventually destroyed by Jill Valentine.

Following the Raccooon City incident, numerous bioweapons spun off from the Tyrant Project have seen action, as have more Tyrants cloned from the T-103 series. With the Umbrella Corporation effectively defunct, it is safe to say the Tyrant has outlived its original creators.

The Tyrant was the intended end result of the Umbrella Corporation's aptly-named Tyrant Project, deriving its name from the Tyrant Virus (better known as the T-Virus) used to create the bioweapon. The project began in 1988, with the goal of creating the ultimate biological weapon for military use. Compared to the standard human mutant created by the T-Virus, the zombie, the Tyrant was to be considerably larger, stronger, more durable, and intelligent, making it a very attractive weapon for military application. By 1998, Umbrella had succeeded in creating the T-001 model, also known as the Proto-Tyrant, a flawed experimental model of Tyrant.

The T-001 was created at Umbrella's Arklay Mountain Laboratory, a prototype model for the finished T-002. Due to what was determined to be an overdose of T-Virus during its initial infection, the T-001 was completed with numerous flaws including a compromised nervous system and reduced intelligence. Deemed a failure, the T-001 was awaiting disposal at NEST until James Marcus unleashed it during his campaign of revenge against Umbrella. The T-001 encountered S.T.A.R.S. medic Rebecca Chambers and was defeated, then returned to attack Rebecca and escaped fugitive Billy Coen. The two once again defeated the T-001 and went on to confront Marcus himself. Albert Wesker later encountered the T-001 and defeated it as well, and it was finally destroyed for good when the Arklay Mountain facility self-destructed.

Following the failure of the T-001, Umbrella completed the T-002 model at the Arklay Mountain Laboratory. This time, the only adverse mutation suffered by the Tyrant was its exposed heart, making it a success compared to the Proto-Tyrant. However, James Marcus' interference caused the T-Virus to leak at the facility, infecting several researchers and turning them into zombies. Wesker, masquerading as the captain of S.T.A.R.S., was given orders to destroy the Tyrant along with the entire facility during a mission to the Spencer Mansion. Wesker collected samples from the Tyrant so Umbrella could use them later, but rather than destroy it Wesker unleashed the Tyrant from containment. The beast immediately attacked Wesker and apparently killed him before turning its attention to the surviving S.T.A.R.S. members. They managed to knock the Tyrant unconscious, after which the facility's self-destruct sequence was armed. Chris Redfield, Jill Valentine, Rebecca Chambers, and Barry Burton fought their way to a helipad in order to escape before the facility exploded, but the Tyrant soon revived and burst through the ground onto the helipad, intent on killing the S.T.A.R.S. survivors. Fortunately, pilot Brad Vickers dropped a rocket launcher onto the helipad, allowing either Chris or Jill to destroy the Tyrant with a direct strike from a rocket.

Despite setbacks suffered with the T-001 and T-002, Umbrella continued work on the Tyrant Project using an embryonic clone of the T-002 evacuated from the Arklay facility. The Tyrant was finally perfected into the T-103 model, which was cloned and mass produced at Umbrella's Sheena Island facility. When the T-Virus was unleashed in Raccoon City following an altercation between Umbrella forces and Dr. William Birkin at the NEST facility, Umbrella saw an opportunity to test the viability of its new T-103 Tyrants in combat. Six T-103s were airdropped into Raccoon City during the T-Virus outbreak, with five being tested in combat against the U.S. military. The sixth, T-00, was given a mission: Recover a sample of the G-Virus from Sherry Birkin's pendant and eliminate all remaining Raccoon City police officers and surviving civilians holed up at the Raccoon City Police Station. T-00 quickly encountered rookie cop Leon S. Kennedy and college student Claire Redfield. Designating the two as targets, T-00 relentlessly pursued them through the station in an attempt to kill them.

It is unclear how exactly T-00 met its end. One account states that it was attacked by Birkin, now mutated into the creature known as "G" after injecting himself with the G-Virus, while pursuing Claire and Sherry. G supposedly tore the Tyrant in half with its massive claws, killing it instantly. Another account claims it continued to pursue Leon and mercenary Ada Wong all the way to NEST. As NEST self-destructed, T-00 was caught amidst a series of explosions which destroyed its power limiter, mutating it into a Super Tyrant. The Super Tyrant attacked Leon on an elevator platform and nearly killed him before Ada dropped a rocket launcher onto the platform. Just like the T-002 before it, the Super Tyrant met its end with a direct hit from a rocket. Whatever the case, T-00 was destroyed during its mission, and the other T-103s were wiped out by the subsequent sterilization of Raccoon City. Jill Valentine at one point encountered numerous Tyrants in suspended animation inside NEST 2, but it is unknown if these were T-103s or perhaps other prototypes.

In Resident Evil: Resistance, T-00 will be playable if choosing Daniel Fabron.

In the 1980's, a side-project of the Tyrant Project known as the Nemesis Project arose. This project sought to replace the brains of Tyrant specimens with a parasite, which allegedly would improve the subject's intelligence and capacity to be controlled. In 1998, the project came to fruition when Umbrella successfully infected a T-103 specimen with the NE-α parasite. The parasite disfigured the Tyrant host and transformed it into a unique new bioweapon: the Nemesis T-Type. The Nemesis T-Type is considered to be the strongest of all Tyrants. In order to test their new weapon, Umbrella decided to send Nemesis after surviving members of S.T.A.R.S. in Raccoon City as an act of revenge for the Arklay Mountain incident. Nemesis pursued Brad Vickers and Jill Valentine, with Brad meeting his end but Jill continuing to battle her pursuer across the city. As it sustained more damage, Nemesis continued to regenerate and mutate further thanks to the parasite. Jill eventually destroyed Nemesis inside NEST 2 after it mutated into a monstrous final form, putting an end to the Nemesis Project.

In Resident Evil: Resistance, Nemesis will be playable if choose Nicholai Ginovaef

Following the sterilization of Raccoon City, Claire Redfield was captured and detained by Umbrella at their Rockfort Island facility, where she subsequently escaped with fellow prisoner Steve Burnside. In order to kill both, Umbrella unleashed a Tyrant designated T-078 which was cloned from the mass-produced T-103 model. However, unlike other T-103s, T-078 was without a limiter coat, allowing it to experience minor unique mutations such as its blunted claws. Claire seemingly defeated the Tyrant, but it managed to climb aboard the plane she and Steve were using to escape. Claire battled the Tyrant in the cargo hold, finally defeating it by causing cargo to crash into it, sending it plummeting into the sea below.

At least three Tyrants, designated "008," "013," and "016," were acquired by the government of the Eastern Slav Republic and unleashed in 2011 to try and kill Leon Kennedy and rebel forces leader Alexander Kozachenko during the country's civil war. It is unknown what if any series these Tyrants belonged to, however they are identical in appearance and function and strongly resembled the T-103 model. 008 and 016 were unleashed in an underground laboratory to pursue Leon and Alexander, but the two men managed to escape to the surface where they found 013 waiting for them. Alexander combated the Tyrant with an army of Lickers which he controlled, eventually triggering an explosion that destroyed the 013's power limiter and transformed it into a Super Tyrant. Leon, having commandeered a tank, managed to kill the Super Tyrant by decapitating it with a direct shot from the tank's turret. However, both 008 and 016 mutated into Super Tyrants as well and made their way to the surface to finish off Leon. Fortunately for him, both were quickly destroyed in a joint US-Russian drone strike. 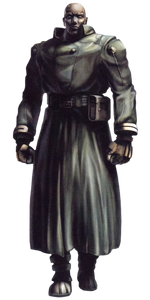 T-00 in the original Resident Evil 2. 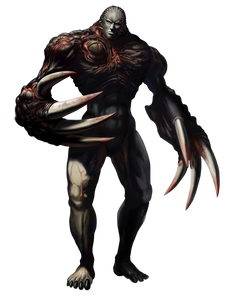 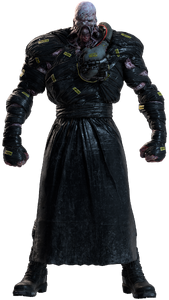 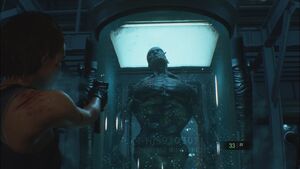 A Tyrant in suspended animation at NEST 2 in the Resident Evil 3 remake.
Add a photo to this gallery

Retrieved from "https://villains.fandom.com/wiki/Tyrants_(Resident_Evil)?oldid=4117200"
Community content is available under CC-BY-SA unless otherwise noted.