Despite the fact that he works for the company whom the hacker group Fsociety is targeting, he does not appear to act against them and only seems to act in his own interests.

He is portrayed by Swedish actor Martin Wallström, who also portrayed Martin Borhulth in the Johan Falk series

Tyrell is present when E Corp is given a tour of All Safe. He briefly encounters Elliot Alderson, a tech. They bond over the same software they use as Elliot is shocked to hear he uses an outdated engine. Later in the episode, he has Elliot escorted by some of his men to a conference room. He asks Elliot to become a part of E Corp to which Elliot refuses. Tyrell is later seen becoming very anxious about his promotion seeing runner-up and respected colleague Scott Knowles as an immediate threat. He has intercourse with a homosexual receptionist of his with the sole interest of hacking into his phone. He has dinner with Scott Knowles and his wife during which he blatantly shows interest in Scott's wife Sharon. Intentionally walking in on her in her bathroom and thanking her for a wonderful evening. She later tells Scott who confronts Tyrell about it. When Scott is chosen as CTO a ceremony is held in his honor. Sharon approaches Tyrell who orders her to meet her on the roof with the intention of sleeping with her on his wife Joanna's directive. The two briefly speaks as she admits Scott plans on firing him as well as being intrigued by Tyrell. The two engage intimately as Tyrell impulsively strangles her to death. Police question Tyrell as a person of interest in Sharon's murder. Upon hearing this information he is fired but during so he discovers more information on Elliot's involvement with F Society. He confronts Elliot and intimidates him into bringing him to the carnival warehouse. Elliot awakes in Tyrell's SUV with Tyrell's whereabouts being unknown to Elliot.

Tyrell has gone into hiding and hasn't been seen since confronting Elliot. It is shown Elliot (possibly under the influence of Mr. Robot) grabbed a gun hidden in a popcorn machine by Darlene. Elliot grabs hit as he walks off-screen towards Tyrell. Elliot experiences brief hallucinations of Tyrell's voice and asks what Mr. Robot did to him to which he refuses to answer. Joanna agrees to testify he hadn't come home on the night of Sharon Knowles' death in exchange for the remaining amount of Tyrell's severance package to which Scott refuses.

Tyrell eventually gets in contact with Elliot through an encrypted message and meets him in a taxi. Elliot, believing Tyrell to be dead, does not believe his senses, though he follows Tyrell to an abandoned warehouse to complete "Phase 2," which would destroy a building containing all of E-Corp's paper documents and files (saved to be restored digitally following fsociety's first hack) and permanently cripple them. Elliot, who fears for the loss of life that would result in his actions, tries to shut down the program, forcing Tyrell to shoot Elliot in the stomach, where he is then taken to the hospital to recover.

It is revealed that the incident with Tyrell shooting Elliot was because of Irving manipulating Tyrell into accidentally shooting him. He wakes up with a bunch of Dark Army men watching cartoons on a TV and instantly asks where Elliot is. A man named Williams says that he will answer, but first needs to test Tyrell's loyalty to the Dark Army. He asks a bunch of questions, and the result indicates Tyrell not being loyal, admitting that he killed Sharon Knowles.

Tyrell works with the Dark Army, Mr. Robot, and Angela Moss to carry out something called "Stage 2" which would completely destroy E Corp. The reason he is doing this is because he wants to serve as the right-hand to Mr. Robot who he looks up to, rather than being interested in the project himself. The goal of stage 2, however, which only Whiterose and a number of other dark army members are aware of, is blowing up thousands of E Corp buildings.

Tyrell does become CTO of E corp during the season, but once he gets the position, which he always wanted to get, it is revealed to him that the position is absolutely worthless. His life becomes even more miserable though when Santiago captures him and coldly reveals to him that his wife has been killed. Santiago, being a mole for the Dark Army, threatens Tyrell that he will do something horrible to his son if he doesn't do what the Dark Army tells him to do.

Now CTO of E Corp, Tyrell is praised by the world as a reason for the economical situation getting better after the 5/9 hack which negatively impacted it as E Corp effectively reversed the hack. However, despite the praise he is getting, Tyrell is bored and hates his position. While sitting in his office, his assistant Elisabeth tells him about the meetings he will have that day. Tyrell wants to delay all of the meetings to tomorrow, but Elisabeth responds by saying that they cannot.

In the third episode, Whiterose tells her assistant that they will make Tyrell the new CEO of E Corp, basically taking the position that Philip Price had before as Price wants to step down from his position. At the end of the episode, when Elliot and Mr. Robot go to their apartment, they see that someone has broken in. When they walk into the apartment, they see Tyrell sitting at the desk. He cheerfully tells Elliot and Mr. Robot that he is has been granted the position as CEO of E Corp and that it's time to defeat them from the inside, but Elliot tries to keep him silent. Tyrell keeps on talking until Elliot reveals to him by writing on a paper that Dark Army operatives are sitting in a van outside and listening to what they are saying.

The fourth episode starts where the third episode ended. The man intercepting Tyrell and Elliot starts experiencing that the audio is starting to distort, so he decides to walk away and investigate the antenna. Tyrell walks out of the apartment and starts beating him before murdering him with a hammer. Tyrell proceeds to ask Elliot to look if the man managed to send the recorded audio to the Dark Army. It turns out that they weren't. Mr. Robot, Elliot and Tyrell have to hide the body and do so by placing the dead body in a car. They drive and stop at a store to buy a lighter and some gas in order to burn the body. After this, they walk into a forest to find a creek that they can use to hide the body. They walk for a long time without finding the creek, but eventually, they see a car which they follow until they see the store again, realizing that they are back where they started.

Throughout the walk, Tyrell talks with Elliot about how he constantly wears the same black hoodie which shows how little he cares about how society perceives him, which is different from Tyrell who is wearing a suit that costs six thousand dollars. Later during the walk, Tyrell points out that he doesn't think Elliot cares about him, which Elliot admits. Elliot then tells Tyrell that he never cared about him to begin with, never needed him, and won't care if he dies, before walking away. But then Elliot returns and tells him the opposite, that Elliot actually doesn't enjoy not fitting in and actually does care about Tyrell as he's the only person who likes him.

The trio continues to walk around until they observe a collided van and a deceased deer. Elliot looks into the van but realizes that there's a Dark Army operative hiding there. The operative starts shooting at Elliot but he manages to survive. It turns out that Tyrell took the bullet instead of Elliot, and that the operative committed suicide after failing to shoot Elliot. Tyrell is shot in the stomach meaning that he has a low chance of surviving, but Elliot tries encouraging him to get to the hospital. Tyrell sees no point in doing that as the Dark Army will have him killed either way. He tells Elliot to defeat Whiterose, before taking a final walk into the woods and collapsing. But before he dies, he sees a mysterious light shining into his face. It is yet to be revealed what this light is.

In episode 11, when Elliot discovers that there are parallel universes, Tyrell is seen in a black hoodie, having taken the position that Elliot has taken in his universe as a vigilante hacker trying to take down "the people who play god without permission". Elliot is in that universe a high-ranking corporate executive dressed in a shirt and knitted sweatshirt, soon to be married with Angela.

Tyrell is intelligent and very perceptive, and he takes much pride in this, so much so that it can be interpreted as unbridled vanity.

He is also extremely intolerant towards failure, and is often prone to sudden fits of anger and/or violence, much like when he attacked a homeless man after learning that he would be passed over for a coveted promotion (which he slapped himself over as he flubbed his prepared statement). Tyrell is very impulsive but once he has decided to do something he will do it until it's complete, even if it might be bad for him in the end. A good example is becoming CTO of E Corp, a position he viciously works to get but in the end turns out to be meaningless and the job makes him more bored than ever.

He appears to be loyal to his company, E-Corp, but he will do whatever is necessary to climb the corporate ladder, even when it's against E-Corp's interests, much like when he deduces Elliot Alderson's role in the Allsafe hack that was framed on his superior, Terry Colby but decides not to act against him to ensure that he can still attain his prior title of CTO.

Despite being obviously mentally ill, Tyrell admires his wife and son. When he hears that they are both pretty much gone from his life, he gets a mental breakdown and starts crying. His wife Joanna is also quite manipulative and arrogant to him, which only makes him even more tragic.

And Tyrell's feelings towards people he cares about aren't necessarily faux. But this loyalty can go to extremes, as shown in season 3 when he starts working actively against his own company, E Corp, just to maintain a position as Mr. Robot's right-hand. At the end of season 4, he takes a bullet meant for Elliot in order to save him, leading to his own presumed death, which is a good example of this.

Tyrell may have wealth and status on the outside, with expensive shirts, ties, and suits, but on the inside he's lonely and confused. He has to compensate what he doesn't have on the inside by having it on the outside. He desires to have power but is a slave to those who truly have power. At the same time, he goes against those who have power on the orders of outsiders. But at the same time as he works for outsiders like Elliot and Mr. Robot, he wants to fit in with the rest of society. 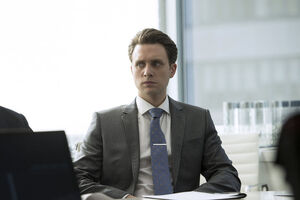 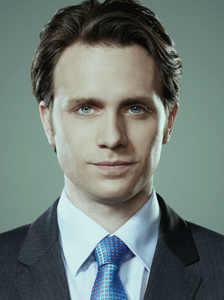 Promotional photo of Wellick in season 2 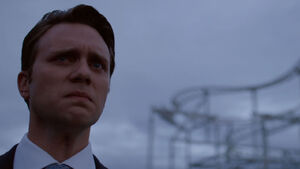 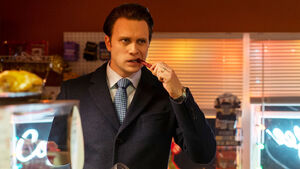 Wellick in season 4
Community content is available under CC-BY-SA unless otherwise noted.
Advertisement