Carrying out missions for Salem.

Assist Salem in her plans.

Tyrian Callows is a major antagonist of the American animated webseries RWBY. He is a serial killer and a member of Salem's Faction.

He is voiced by Josh Grelle, who also voices Demigra and Yukiteru Amano.

Tyrian is a pale man with a brown braided ponytail and gold eyes. He wears a white sleeveless jacket with leather belts strapped to it, along with white pants. His jacket is left open, exposing his bare chest, which is criss-crossed with prominent scars. His arms are covered with purple bandages and leather vambraces. He also wears leather boots covering his entire shin with knee guards. On each earlobe is a silver earring shaped like a ring, and near the top of his left ear is another matching earring. In the episode "Menagerie", he appears in a dark brown jacket which he wears open the same way he does his white.

In "Tipping Point", it is revealed that his animal trait as a Faunus is a scorpion stinger which protrudes from his back. When not in use, he disguises it by wrapping it around his belt. His eyes can also change color from gold to purple. The stinger is separated from the tail after Ruby cut it off with Crescent Rose and later replaced with a spike and finally a mechanical tail courtesy of Arthur Watts.

In the past, Tyrian was a known serial killer who killed people across Remnant. He was eventually arrested, but his transport to prison was attacked by Grimm and he escaped. Likely as thanks to the Grimm's leader Salem, Tyrian swore allegiance to her and regarded her as his queen.

In "The Next Step", Tyrian attends a meeting at Salem's Domain along with Watts, Cinder and Hazel. Tyrian encourages Cinder to seek revenge on Ruby Rose for the loss of her left eye. Salem later orders Tyrian to continue his search for the Spring Maiden. However, upon hearing Cinder's concern about Ruby, she reassigns him to track Ruby down and bring her back alive. Tyrian promises to take one of Ruby's eyes for Cinder before bursting into maniacal laughter.

In "Menagerie", Tyrian arrives at Higanbana and asks a waitress for information on Ruby's whereabouts.

In "Tipping Point", Tyrian intercepts Team RNJR at Oniyuri and attacks them. When questioned about who he is, Tyrian tells them that his name doesn't matter and he's only interested in Ruby, whom he declares will be coming with him. During their fight, Tyrian reveals he is a scorpion Faunus, which makes Ruby question if this is about the White Fang or Roman Torchwick. Tyrian calls them nothing but pawns and states that he only serves his "goddess". Despite Team RNJR's efforts, Tyrian easily defeats them and incapacitates Ruby. However, before he can strike her with his stinger, Qrow Branwen intervenes and blocks the attack.

In "Punished", Tyrian has a quick talk with Qrow before engaging him in battle. Ruby attempts to rejoin the fight despite Qrow's warnings and Tyrian knocks her into an unstable building; causing Qrow to come save her from falling debris. Tyrian takes the opportunity to strike Qrow across the abdomen with his stinger; poisoning him. However, Ruby severs Tyrian's stinger from his extended tail with Crescent Rose, causing him to scream in pain. Surrounded and too injured to continue fighting, Tyrian flees the area, hoping Salem will forgive him for his failure.

In "Taking Control", Tyrian returns to Salem's Domain and grovels before Salem. He tells Salem that though he failed to retrieve Ruby like she asked, he managed to poison Qrow and remove him as a threat; asking if he's still pleased her with this action. Salem nonetheless expresses disappointment in Tyrian, causing him to break down into tears and bawl. When a nearby Beowolf attempts to attack him, Tyrian viciously kills it before taking his grief out on its corpse; stabbing it repeatedly as his cries turn into maniacal laughter.

In "Dread in the Air", when Salem hears that Qrow is alive and well, she orders Cinder to summon Tyrian to her conference room so she can "have a word with him".

In "So That's How it Is", Tyrian returns with a new mechanical tail made by Dr. Watts. He mocks Hazel, Mercury Black, and Emerald Sustrai on their defeat at Haven Academy, enraging Emerald when he mocks the supposed death of Cinder. She threatens him and cuts his face, but he only laughs manically. He later attends a meeting called by Salem, where he offers to stop the Beacon students from delivering the Relic of Knowledge to Atlas. However, Hazel reveals that Ozpin is still alive, prompting Salem to dismiss Tyrian and the others before unleashing her rage.

In "Lost", Tyrian gives Emerald and Mercury some advice about how far they want to go, before telling them that he and Watts have been assigned to a special mission to go to Atlas.

In "A New Approach”, Tyrian and Watts have a brief argument via earpieces. Tyrian expresses worriment that he and Watts will be recognized by the Atlas security. Watts reassures him by telling him the security code in Mantle is outdated, allowing the scientist to hack the security cameras, and allowing both men to walk freely.

In "Ace Operatives”, Tyrian corners Forest in an alleyway. Forest asks who the scorpion Faunus is. Tyrian responds to the question that he's someone like him, someone who wants to mix things up around Mantle. Afterwards he proceeds to kill Forest.

In "A Night Off”, Tyrian and Watts sabotaged Robyn Hill's victory party. With Watts cutting the power and altering the security camera footage, Tyrian was free to kill as many of Robyn's supporters. He attacked Fiona, Robyn's right-hand woman, and then made his escape. With Tyrian gone, Watts switched the lights back on. The survivors of the ordeal seeing Penny on the stage with Robyn, they quickly placed the blame on her.

In "As Above, So Below”, Tyrian drops down from the rooftops. He and Watts watch as the citizen of Mantle riot and loot the stores as well as destroy the paladins.

In "Out in the Open”, Tyrian and Watts watch Ironwood and Robyn Hill expose the truth about the recent murders and their plans to divide the people of Mantle. Watts looks at the schematics in making Amity Colosseum a communications tower, and is dumbfounded how those plans had gotten past him. Tyrian becomes enraged that their plans failed. Watts goes to sabotage the colosseum, Tyrian is sent to create more tension and chaos in Mantle. Later, Tyrian corners Robyn in an alleyway, dodging, and catching her crossbow bolts. Tyrian charges at Robyn, but is interrupted by Qrow and Clover.

In "Gravity”, after Clover tell Tyrian he is under arrest, he begins to cackle insanely. In response, Qrow charges at him. Tyrian blocks and counters their attacks. With Qrow fighting on the offensive, while Clover, and Robyn providing support. They quickly overwhelm Tyrian, which causes him to burst out into maniacal laughter. Robyn shoots a crossbow bolt at him, he catches it in his teeth. Suddenly, the bolt explodes, dazing him, and depleting his aura. While on the ground he chuckles at Robyn as she approaches, she then kicks him in the head, knocking him out. Much later during the time Ruby is exposing Ironwood's plan to her companions, Tyrian is seen on the bullhead airship, tied up, and sitting next to Clover, Robyn, and Qrow.

Tyrian appears as a unit in RWBY: Amity Arena. He is a melee fighter whose attacks do lingering poison damage to targets. Upon death, he releases a large AOE poison that damages all enemies in the radius.

Tyrian was described to his voice actor Josh Grelle, as psychotic incarnate, and someone who wants to see the world burn. He is also a highly kooky, unstable and maladjusted individual. He frequently bursts into fits of uncontrollable and maniacal laughter, and relishes in gruesome thoughts, such as removing one of Ruby Rose's eyes in revenge for her taking one of Cinder Fall's. He is also extremely effervescent, vivacious and gleeful when instructed to find Ruby, though is disappointed when told he must capture her alive. Another one of his eccentricities is sitting in a crouching position in his chair.

He finds amusement in taunting his opponents while he fights and shows joy when Team RNJR will not allow him to take Ruby without a fight, indicating a level of bloodlust. When he appears to have the upper hand in a fight, he becomes overconfident and careless, letting himself take hits as long as he can continue to press the advantage. He also has a flair for the dramatic, wildly posturing and gesturing with deliberate dramatic pauses as if he were giving a stage performance.

His instability is evident when he suffers from a mental breakdown after hearing he disappointed Salem. Tyrian proceeds to cry in despair before viciously retaliating against a Beowolf which lunges at him and regaining a sense of his sadistic joy as he does so.

Tyrian is shown to have incredible speed, able to dash behind an opponent and strike before they can even blink. He is also strong enough to block an attack from a fully charged Nora Valkyrie with ease and is able to overpower Team RNJR without much effort; while the latter couldn't even touch him. While he displays traits that may suggest otherwise, he is incredibly combat efficient, is smart enough to know which targets to prioritize, and had the forethought to hide his Faunus trait in order to get an advantage against Team RNJR. His fighting style makes effective use of all five of his limbs, allowing him to engage multiple opponents with minimal difficulty. However, his style is not flawless, and his chaotic mindset does leave him open to attacks from superior strategists, which resulted in the loss of his stinger, albeit after delivering a near-fatal dose of venom to Qrow Branwen.

According to Cinder, Tyrian is strong enough to kill fully trained Huntsmen.

Tyrians's weapon of choice is a set of wrist blades attached to his vambraces equipped with firearms.

He also uses his stinger in combat, which he can contract and extend at will. The stinger happens to be remarkably durable as it blocks Nora's attack, even when Nora was powered up by an electric shot from Crescent Rose. Much like how scorpion stingers are usually a conduit for venom, Tyrian's stinger can inject venom when used as a barb, as seen when he grazed Qrow Branwen with it. When he intends to sting someone, his eyes turn dark purple. After the battle against Qrow and Team RNJR, he lost his stinger along with a portion of his tail. His venom was potent enough to corrode stone and incapacitate someone who was simply grazed by his stinger within less than a day. 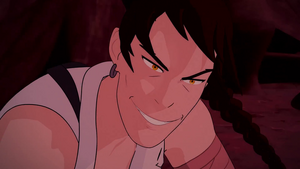 Tyrian in the Volume 4 Opening. 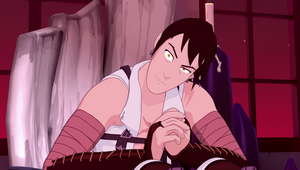 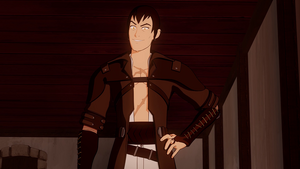 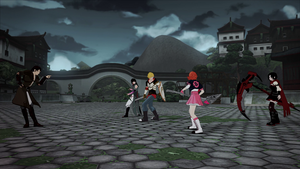 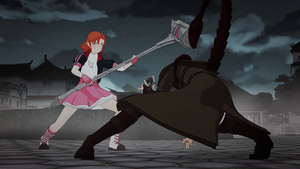 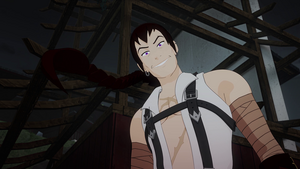 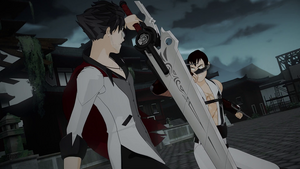 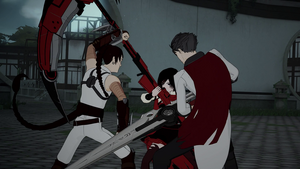 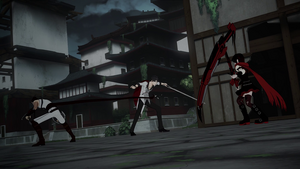 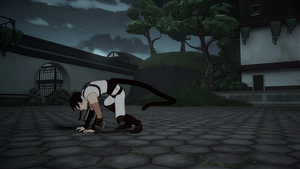 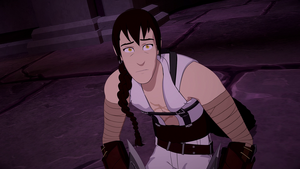 Tyrian reporting his failure to Salem. 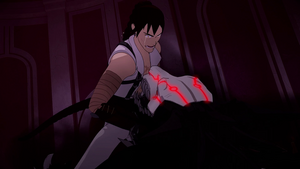 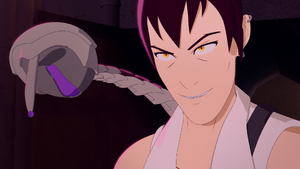 Tyrian with his mechanical stinger. 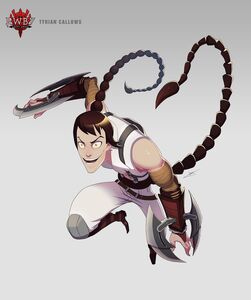 Tyrian as he appears in RWBY: Amity Arena. 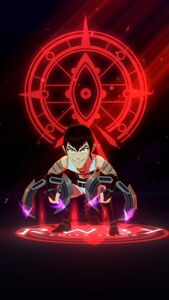 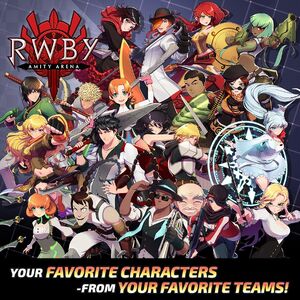 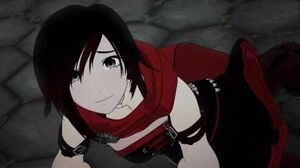 Team RNJR and Qrow vs. Tyrian
Add a photo to this gallery

Retrieved from "https://villains.fandom.com/wiki/Tyrian_Callows?oldid=3509957"
Community content is available under CC-BY-SA unless otherwise noted.