NOTE: FOR THE SAKE OF THIS WIKI, THIS PAGE MAINLY ACCEPTED THE MORE VILLAINOUS VERSION OF TYRION IN THE BOOK SERIES

Nobleman of House Lannister of Casterly Rock (disgraced from the family, exiled)

Tyrion Lannister is a main character in A Song of Ice and Fire and its TV Adaptation Game of Thrones. Though an often heroic character, and more heroic in the TV Series, he is also a villainous character, also supporting his family, House Lannister, in its villainous deeds.

Tyrion Lannister is a member of House Lannister and youngest child of Lord Tywin Lannister and Lady Joanna Lannister. His older siblings are Cersei Lannister, the queen of King Robert I Baratheon, and Ser Jaime Lannister, a knight who served in the Kingsguard of kings Aerys II, Robert, Joffrey, and currently Tommen.

He was portrayed by Peter Dinklage, who also played Captain Gutt in Ice Age: Continental Drift, Miles Finch in Elf, Frank Lovett in A Death at the Funeral (both original and remake), Simon Bar Sinister in the 2007 adaptation of Underdog, Eddie Plant in Pixels, and Bolivar Trask in X-Men: Days of Future Past.

Tyrion Lannister first appears in "A Game of Thrones" among King Robert's party at Winterfell. He accompanies Jon Snow to Castle Black, wishing to see the wonder that is the Wall - a seven hundred foot high magical wall of ice, stretching three hundred miles, that has stood for eight thousand years. It was built by the First Men to defend the realm against the Others and other monsters. After returning from his visit to see the Wall, Tyrion is abducted by Lady Catelyn Stark in the Riverlands on his way back to King's Landing. Tyrion is accused of hiring a Catspaw to kill Catelyn's son Bran Stark and is accused of the assassination of Lord Jon Arryn - the Hand of the King, Lord of the Eyrie, and Warden of the East. Catelyn takes Tyrion to her sister Lady Lysa Arryn, the widow of Jon Arryn, in the Vale of Arryn. In response to Tyrion's abduction, Tyrion's father, Tywin Lannister attacks the Riverlands, the seat of House Tully (Catelyn's family), and he raises a host at Casterly Rock against House Tully.

Tyrion is later released, rallies the Hill Clans of the Vale to the Lannister cause, and assists in the Battle of the Green Fork. Tywin sends him to King's Landing to act as Hand, prepare the defenses of the city against Stannis Baratheon and Renly Baratheon, clean the mess created by Cersei and the rest of the small council, and verify the loyalty of Lord Petyr Baelish, Lord Varys, Grand Maester Pycelle, and Lord Janos Slynt.

Robb Stark sends peace terms to the Lannisters, intending for the North and Riverlands to secede from the Iron Throne. Tyrion claims he will exchange Robb's sisters Sansa and Arya Stark for his brother Jaime Lannister, who has been captured by the Starks. However Tyrion has no intention of making terms, Arya has disappeared and the Lannisters only hold Sansa. Tyrion sends his sister's men with his cousin Ser Cleos Frey as part of an escape attempt. They murder Jaime's guards at Riverrun, breaking guest right, and almost break him out. However, Ser Edmure Tully, Heir to Riverrun and Robb's uncle, discovers the deception in time and recovers Jaime, having the other conspirators hanged.

Tyrion engineers the Lannister defense against King  Stannis Baratheon, setting up a wildfire trap which burns most of Stannis' ships at the Blackwater. Nonetheless, Stannis comes close to taking the city but an attack by Tywin and the greedy and arrogant Lord Mace Tyrell, who has joined the Lannisters in hopes of making his daughter Margaery Tyrell Queen, defeats Stannis, who flees back to Dragonstone.

Tyrion is forced to marry Sansa Stark, Tywin intending for the Lannisters to claim the North through Sansa's claim. Tyrion refrains from consummating the marriage when he sees how terrified Sansa is. He tells Sansa that he will not touch her unless Sansa wants him to.

Robb Stark is murdered at the Red Wedding by his treacherous and manipulative bannerman Roose Bolton, with the aid of the Freys led by Walder Frey, along with most of his army. Shortly after, Joffrey is poisoned at his wedding to Margaery by Mace's mother Olenna Tyrell. Tyrion is framed for the murder and put on trial. He is found guilty but the night before the execution Jaime breaks him out with the aid of Varys. Jaime admits Tysha wasn't a whore, their father forced Jaime to say this. Furious, Tyrion claims he murdered Joffrey. He then goes to his father's room and finds Shae in his father's bed. He strangles her, then confronts his father on the privy, and shoots them dead with a crossbow.

Tyrion is made more adventurous and heroic in the TV series, as most of his villainous actions and traits from the novels are ignored, especially his personality after learning the truth about Tysha. During the third book, he commanded his sellsword Bronn to murder a singer, because said singer implied he would inform Tywin on his relationship with Shae. This could be considered justified, however, he also disposes of the singer's body by ordering him cooked into a stew, thereby turning several innocent peasants into unwitting cannibals. He doesn't spare Shae's life and murders her for calling him "her Giant of Lannister". He becomes angrier after he learned the truth about his first wife, Tysha, and now fantasizes of many horrible ways to get his revenge on his siblings, such as raping and killing his sister (presumably not in that order). He also hits Jaime in the face after he told him the truth about Tysha after freeing him; a furious Tyrion tells Jaime he actually really poisoned Joffrey and reveals Cersei's infidelity and her sexual relationship with Lancel and the Kettleblacks, adding the fool Moon Boy as an exaggeration to make Cersei look more like a whore. Tyrion becomes more short-tempered and forces slave woman to have sex. In both books and show Tyrion threatens to murder his cousin Lancel. 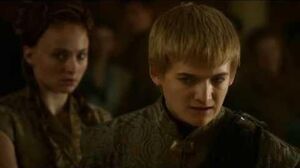 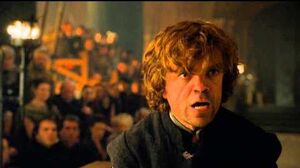 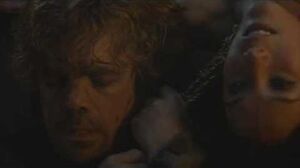 Retrieved from "https://villains.fandom.com/wiki/Tyrion_Lannister?oldid=4278955"
Community content is available under CC-BY-SA unless otherwise noted.