Keeping an eye on Walter.

Serve Gustavo Fring (succeeded for a while)

Tyrus Kitt is a fictional character and recurring antagonist of the 2008-2013 television series Breaking Bad, appearing as a major antagonist in Season 4 and later serving as a supporting character in the prequel series Better Call Saul.

He was a member of the Los Pollos Hermanos security staff who later became closely subordinated with his employer Gustavo Fring, serving as the latter's prominent enforcer in the process.

He was portrayed by Ray Campbell.

Tyrus Kitt is a mysterious and ever watchful enforcer of Gus's skeleton team. His background origins, his personal connections to Gus and Mike Ehrmantraut as well as other elements of his life is mostly unknown and never explicitly elaborated upon.

A possible explanation for his appearance is within a heated confrontation between Mike and Walter, with the former threatening the latter for trying to call the police on "one of my men"; it is possible that Tyrus was hired by Gus and put into his senior position due to Mike's connection and confidence in him, as are many of the other faceless enforcers of Gus's skeleton organization.

Tyrus displays minimal expression of emotion or thoughts throughout his time in the series. He is as enigmatic as his employer and his co-workers, but is shown as extremely effective, unforgiving and aggressive in his role as an enforcer and overseer. He rarely speaks to Walter White or Jesse Pinkman except for the occasional reminder to continue work or stay in line, and is otherwise mostly quiet and hostile towards them.

Tyrus is first seen arriving at the superlab a few days after Victor's death to assist Mike in picking up the daily shipments of "blue sky" from Gus's meth superlab. His sudden presence quickly establishes his role as Walt and Jesse's new main overseer and Gus's left hand enforcer, under Mike in rank. He effectively assumes Victor's surveillance duties, being shown to constantly watch Walt and Jesse wherever they go.

Tyrus is later seen sitting parked in his car, watching Jesse's house. When a squatter makes off with a bag full of Jesse's money, he notifies Mike. The two catch the thief, returning the bag to Jesse who is, surprisingly, indifferent to the money's absence.

Tyrus later confronts the three laundry women Walt hired to clean the superlab, and proceeds to "put them on a bus back to Honduras. He is later seen in his car re-assigned to watching Hank at his house, at which point Walt notices his expanded surveillance of his family and calls the police to pressure Tyrus to leave. Mike later threatens to kill Walt the next time he calls the police on one of his men. Some time after, Walt catches Tyrus watching Hank's house once more.

Tyrus takes charge of Gus's operation and continues to oversee Walt working in the superlab while Gus, Mike, and Jesse head to Mexico to meet and deal with the Juárez Cartel. Walt tries to set up Tyrus for shorting the shipment by weighing the last crate heavy by a few ounces. Tyrus catches him at this and is visibly hostile at the attempt.

After Jesse and Gus return from Mexico with Jessie's loyalties firmly within Gus's grasp, Tyrus effectively becomes Gus's primary enforcer while Mike is still hospitalized from their encounter with the Juárez Cartel in Mexico, and is seen watching Walt and Jessie in the superlab, as well as continuing to watch Hank.

Tyrus later happily attacks Walt with a taser baton outside Jesse's House when Gus orders him to. He then takes Walt, hooded, to meet Gus in the desert, who warns Walt not to interfere with their handling of Hank, whose relentless self investigation of Gus's organization has come too close to exposing him. Jesse stops Gus and consequently Tyrus from killing him due to his previous loyalty to Walt still lingering on. Gus however still evidently has Tyrus prepared to kill him when Jesse falters, assigning Tyrus and several of his men to watch and shadow Walt and his family. Walt immediately panics after his kidnapping into the desert and meets Saul to arrange for his family to disappear. He also pleads with Saul to make a tip-off call to the DEA claiming that the cartel has renewed the hit on Hank as a means of warning his brother-in-law in directly. Saul does so reluctantly but loyally. However, Tyrus is alerted, and continues to track Walt, Jessie and Walt's family.

In the final episode of Season Four, Hector "Tio" Salamanca is seen heading to the DEA office to speak with Hank. Tyrus was watching him, and he alerts his employer, who assigns him to scan Salamanca's nursing home. Tyrus proceeds to check Salamanca's room for bugs, traps and other dangers before accompanying Gus back to the home, where Gus personally wishes to kill Salamanca. Tyrus narrowly misses Walt hiding around the corner.

Tyrus secures the perimeter once more before readying a poisonous needle for Gus to inject into Salamanca. However, Walt and Salamanca's trap catches them off-guard as Salamanca furiously begins ringing his bell. Gus realizes what Tio is doing, but only has time to shout; the bomb detonates before either of the two can effectively react and both are killed along with Hector. 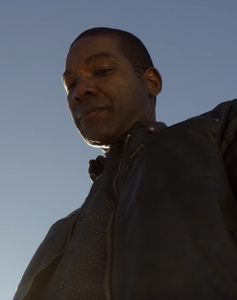 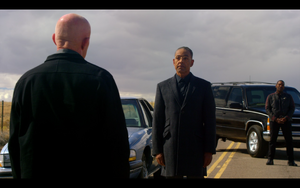 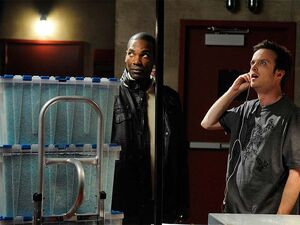 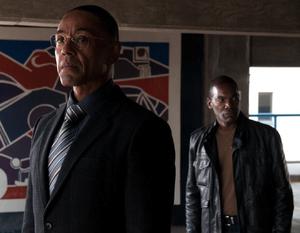