Tim Shaw (by the Doctor)

Member of the Stenza warrior race

Ability to freeze his victims to death

Bring a human trophy back to his home planet in order to become the new leader of his race.

Get revenge on the Doctor for defeating him and destroy Earth and to alter the fabric of the universe (both failed).

Tzim-Sha, also known as "Tim Shaw", is the main antagonist of the eleventh series of the Doctor Who revival series, appearing as the primary antagonist in the episodes "The Woman Who Fell To Earth” and "The Battle of Ranskoor Av Kolos”. He is a member of a race of alien warriors called the Stenza.

He was portrayed by Samuel Oatley.

“The Woman Who Fell To Earth”

In order to become the next leader of his race, Tzim-Sha was sent to Earth to find a human trophy without the use of weapons or assistance and bring them to his planet. However, Tzim-Sha cheated by using a swarm of gathering coils to locate his trophy: a man named Karl Wright.

Tzim-Sha arrived in the English city of Sheffield in a pod after being accidentally summoned by Ryan Sinclair. The pod (with Tzim-Sha still inside it) was taken by a man named Rahul (whose sister had been taken as a trophy by the Stenza seven years previously) who took it to his garage. After Tzim-Sha emerged from his pod, Rahul demands to know what happened to his sister to which Tzim-Sha says that he will never know, before freezing Rahul to death and taking one of his teeth as a prize. He then fleed the garage just as The Thirteenth Doctor, Ryan, Yasmin Khan and Graham and Grace O'Brien arrived.

Tzim-Sha later encountered a drunk man, who mocked his armour (believeing it to be a Halloween costume) and threw salad at him. Tzim-Sha responded by killing the man and taking one of his teeth.

Tzim-Sha was later confronted by The Doctor and her companions who saw that he had placed his victims teeth on his face. The Doctor attempted to get Tzim-Sha to leave Earth, but he refused and absorbed data from the gathering coils and used a short range teleport to escape the group and arrive at a construction site where Karl worked aa a crane operator.

Upon arriving at the construction site, Tzim-Sha killed the site's security guard before climbing up the crane Karl was operating. He later stopped Karl from jumping from his crane onto a neighbouring one where the Doctor was and started to drag him away. The Doctor jumped across and went after him and threatened to destroy his recall device (which would allow him to return home) if he did not release Karl. Believing that the Doctor was bluffing, Tzim-Sha detonated DNA bombs that the gathering coils had placed in the Doctor and her companions eariler, only to discover that the Doctor had transferred the bombs into the coils' data, which Tzim-Sha had downloaded.

Because of this, Tzim-Sha released Karl and took back the recall device, only to be kicked off the crane by Karl. However, Tzim-Sha was able to teleport away before he could hit the ground.

“The Battle of Ranskoor Av Kolo”

A badly injured Tzim-Sha was teleported to the planet of Ranskoor Av Kolo where two Ux named Andinio and Delph mistook him for their creator and helped nurse him back to health and placed him in a building which Tzim-Sha called a "shrine" where he was worshipped as a god. With the Ux's help, Tzim-Sha created a machine that could shrink planets and put them in stasis. He had so far shrunk five planets and committed genocide of all the inhabitants on them. This action was discovered by the Congress of the Nine Planets, who sent fleets of ships to stop Tzim-Sha from shrinking more planets, but they were defeated by his forces.

3,407 years later, the Doctor, Graham, Yaz and Ryan arrived on Ranskoor Av Kolo and discovered Tzim-Sha there and discovered that he had kidnapped the crew of a man named Greston Paltraki.

In an attempt to get revenge on the Doctor for ruining his chance to become leader of the Stenza, Tzim-Sha, with the power of the Ux, tried to use the machine to shrink Earth too as it was where he and the Doctor previously met. Fortunately, the Doctor, Yaz and the Ux (upon learning of Tzim-Sha's true intentions) stopped this and returned the five other planets to the original place and size.

Tzim-Sha later confronted Graham (who along with Ryan released Paltraki's crew, who Tzim-Sha kept as trophies), who prepared to kill Tzim-Sha to avenge Grace (who had died helping the Doctor defeat Tzim-Sha previously), but decided against it. He instead shot Tzim-Sha in the foot before he and Ryan placed him in a stasis chamber and told him to think of Grace. The building was then sealed off to stop anyone from freeing Tzim-Sha, thus leaving him trapped for the rest of his life. 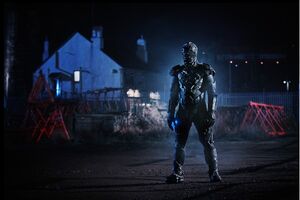 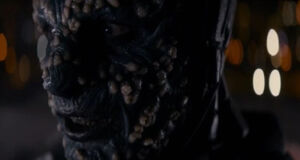 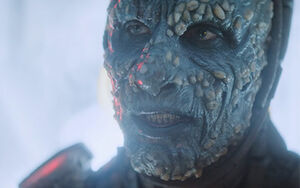 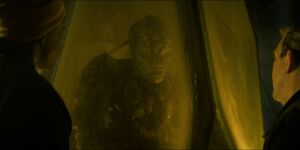