The Tzitzimimeh are a race of female deities from Aztec mythology usually associated with stars. They were depicted as skeletal, female figures wearing skirts with crossbone and skull designs.

The Tzitzimimeh were female deities, and as such related to fertility, they were associated with the Cihuateteo and other female deities such as Tlaltecuhtli, Coatlicue, Citlalicue and Cihuacoatl and they were worshipped by midwives and parturient women. The leader of the tzitzimimeh was the Goddess Itzpapalotl who was the ruler of Tamoanchan - the paradise where the Tzitzimimeh resided.

Tzitzimimeh had a double role in religion. For one side, they were protectresses of the feminine and progenitresses of mankind. They were also powerful and dangerous, especially in periods of cosmic instability. Tzitzimimeh were often linkened to the stars that appear near the sun during a solar eclipse. This was interpreted as they trying to attack the sun, so they could descend to Earth and devour every living thing on the face of the planet and wreak havoc.

They were also feared during other ominous periods of the Aztec world, such as during the five unlucky days called Nemontemi which marked an unstable period of the year count, and during the New Fire ceremony marking the beginning of a new calendar round - both were periods associated with the fear of change.

Because of this, human sacrifices were necessary to keep the demons at bay, or else they would have been successful at destroying humanity.

While not as famous as other characters of the Aztec pantheon, Tzitzimimeh have managed to appear in a good deal of works of fiction. They are monsters in the Pathfinder bestiary, and are demons in the Megami Tensei and Persona series of games. The tzitzimimeh are also the main antagonists of the mexican fantasy novel El Silencio de Orlando, written by Homero Aridjis. Their characterization there is very faithful to mythological tales, but they are depicted as being much more monstrous and demonic in appearance and nature.

A Tzitzimitl from Pathfinder 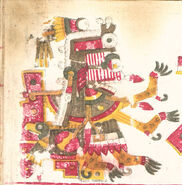 Itzpapalotl, queen of the Tzitzimimeh

Tzitzimitl as she appears in Persona 4.
Add a photo to this gallery
Retrieved from "https://villains.fandom.com/wiki/Tzitzimitl?oldid=3496800"
Community content is available under CC-BY-SA unless otherwise noted.