Warrior of the Druidon Tribe

Defeat the Ryusoulgers and help Druidon Tribe to conquer the world.

Uden is a black bishop-themed general of the Druidon Tribe and a minor antagonist in Kishiryu Sentai Ryusoulger, appearing only in episode 33.

He is voiced by Pile Volcano Ota.

Like the other Druidon generals, Uden was presumably created at some point 65 million years ago by Eras.

Uden arrived on Earth at the Druidon's base just as Gachireus was scolding Kureon for not working. Gachireus soon turned his attention to Uden and became annoyed with how Uden didn't speak.

Uden later ambushed Ryusoul Green and Gold and defeated them, absorbing them into himself to make himself stronger. His victory was observed by Wizeru, who noted that if Uden had arrived then Pricious must not be far behind.

Eventually, Uden defeated Bamba as well leaving only Nada as Gaisorg. Even with the power of the Gaisorg armor, Nada was still overpowered by Uden. However, Nada managed to get close enough to Uden to strike the badge on his belt, freeing Koh. After Nada died from his wounds, a furious Koh became Max Ryusoul Red to take on Uden. Removing his mask, Uden charged at RyusoulRed but was beaten back by his newfound power before being finished off, freeing the other Ryusoulgers.

When Saden first arrived on Earth, Wizeru initially mistook him for Uden before Saden corrected him. 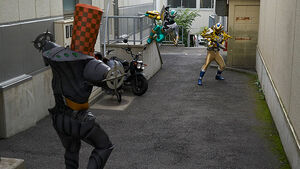 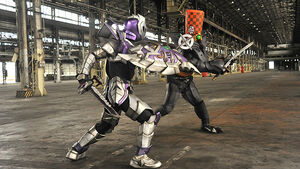