General of the Despar Army

Kill humans, mutants and all threats to the Despar Army.

Udespar is a member of the Despar Army, serving as the army's and Führer Geisel's second-in-command, and the secondary antagonist of Inazuman Flash. He first appeared towards the end of the original Inazuman series.

After being destroyed by Inazuman in episode 7, he was rebuilt into the twins Udespar Alpha and Udespar Beta, who have the power to merge into Combined Udespar.

Udespar made his appearance when he attacked a transport of Phantom Soldiers carrying missiles for the Neo-Human Empire Phantom Army's missile base. Later, while Inazuman was battling Stone Banbara, Udespar and a traitorous Phantom Soldier infiltrated the missile base and fired off a missile towards Tokyo, leading Inazuman to believe the Phantom Army had done so.

A three-way battle soon occurred between Inazuman, the Neo-Human Empire and the Despar Army. Udespar continued his campaign against the Neo-Human Empire, taking the Phantom Army's strongholds all across Japan and sweeping up the surviving Phantom Soldiers into the Despar Army while killing any who refused to join. After Inazuman defeated Emperor Banba and finished him off, Udespar appeared and introduced himself before revealing the Despar Army and their leader, Führer Geisel.

Udespar and Fuhrer Geisel later plotted to abduct human athletes in order to hunt them for sport in a plan known as "Operation Safari". Fuhrer Geisel had Saw Despar kidnap the athletes for them before setting them loose in a field so Geisel, Udespar and several Despar Soldiers could hunt them. They later captured Interpol agent Makoto Arai after they caught him snooping around their base and decided to hunt him. However, this led Goro Watari aka Inazuman to where they were hunting the athletes and allowed him to distract Geisel and Udespar while Makoto freed the athletes.

Following the failures of several Robot Fighters to defeat Inazuman, Udespar drafted a scheme to have a cyborg spy named Miss Wan get close to Goro and kill him. To do this, Udespar had several Despar Soldiers stage chasing Miss Wan so Goro would come and rescue her. While Miss Wan was able to get close to Goro, Goro fended her off when she tried to stab him. After Goro chased down Miss Wan into a field and chose to spare her life, Udespar shot at both of them with his machine gun arm, killing Miss Wan. As a furious Goro got up to face Udespar in a one-on-one fight, Udespar allowed Goro to become Sanagiman and then Inazuman so he could fight him at his strongest. After a tough fight, Inazuman managed to critically damage Udespar with his Zeber, but Udespar remained intact. Udespar boasted that his armor was too invulnerable for Inazuman's Zeber to penetrate him, but Inazuman used the necklace Miss Wan had left behind to make Udespar explode.

The exploded Udespar's parts were later gathered by a group of Despar Soldiers and brought back to Despar's base, where they were used to reconstruct Udespar as Udespar Alpha and Udespar Beta. The two Udespar Brothers were both very powerful, able to perform a combined attack called "Udespar Hurricane" capable of causing great damage, but frequently bickered with each other over would get to fight Inazuman. After the brothers' bickering led to Inazuman escaping with a hostage, Geisel called them both back to the Despar HQ and had a Despar Scientist merge them both into Combined Udespar to fuse their abilities into a single superpowered being.

While Combined Udespar proved formidable against Inazuman and easily beat him down, the mighty power of Combined Udespar caused his circuits to overheat, causing Geisel to call Udespar back and have him separated into the Udespar Brothers again.

The Udespar Brothers would later be fused together into Combined Udespar once more for a battle against Inazuman. In this final battle, Inazuman managed to defeat Udespar by throwing his Zeber in between Combined Udespar's eyes, before pulling it out and using it to strike Combined Udespar with lightning to finally destroy him. 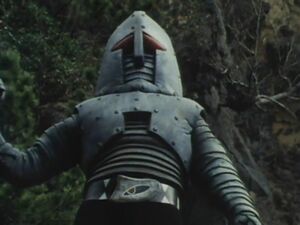 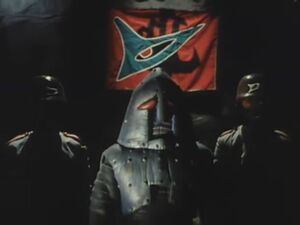 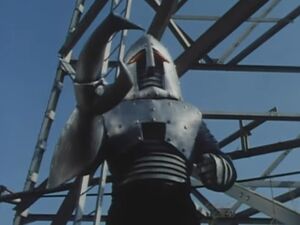 Udespar with his claw attachment. 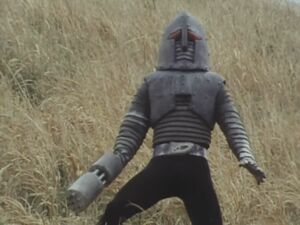 Udespar with his machine gun attachment.