Ruler of Hell (after death)

Rule Hell and Earth for eternity.

Udoroth is a barbaric tyrant and the titular main protagonist from the song of the same name by A Sound of Thunder. Udoroth was once a mortal conqueror who slaughtered most of the area's people and forced the women to be his slaves. Eventually killed and condemned to Hell. Ultimately Udoroth upon arrival single-handedly took over the dark dimension and tortured not only the other souls but the Demons, the sadistic warlord decides to expand his rule to Earth so that he can rule it and Hell with absolute power but in order to do that he must fight the Queen of Hell for the fate of humanity who she surprisingly defends. The song ultimately does not reveal who won this fight but leaves it ambiguous.

Udoroth when a mortal earned a reputation due to his savage conquests, eventually after slaughtering one village and taking some women as his sex slaves but as he sat on his new throne contemplating where to attack next one stabbed him in the throat thus killing him. For his atrocities, he was condemned to Hell but upon arrival, even Demons began to fear him as he single-handedly slaughtered his way through the ranks until he took control of the entire dimension. After countless years of torturing Demons and the damned alike, he eventually harnessed enough power to transform himself into an even more powerful Demon who could harness magic. One day he heard of a prophecy that foretold him finding a way back to the mortal realm thus giving him the chance to expand his kingdom. Udoroth deciding he wanted to rule over both the living and the damned, the tyrant gathered his forces to prepare. Unfortunately for Udoroth the Queen of Hell decided humanity didn't deserve to be enslaved by him. The two forces entered a climactic battle with the video cutting out as the Queen and Udoroth rushing towards each other.

Udoroth was in life a wrathful man of few words who spent his time committing mass murder and forcing the surviving women to be his personal for him to abuse. Even after being condemned to Hell nothing changed other than he was able to indulge in his sadistic tendencies even more. Ultimately his reign was so cruel that no one would dare question or plot against him out of utter fear. The song emphasizes how to him unless others, where shown in fear and pain the mere slaughter, was boring thus he'd regularly brutalize those under him in a variety of ways simply to see their terror. Udoroth was proven to also crave power above all to the point he wouldn't be content unless he could rule both the living and dead for all eternity. Confident in his strength and leadership he rarely showed any fear or hesitance in battle as shown when he conquered Hell and faced against the Queen for the fate of humanity. Udoroth's personality is also shown very briefly in "It Was Metal" where in his brief scene he brags about how he considers himself the best while also showing a complete lack of empathy towards his own minions, one of whom he blends and proceeds to drinks.

In life Udoroth had no real clear superhuman abilities but was a skilled warrior capable of taking down entire villages with little to no assistance, but when he entered Hell he eventually gained many supernatural powers upon becoming a Demon. As a Demon his strength increased greatly along with his other physical attributes and he gained some degree of magic evidenced by him being able to teleport at will. Given his transformation and how Demons seems to have a degree of immortality it can be assumed that Udoroth also gained this. 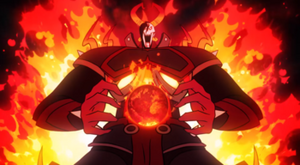 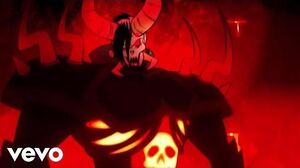 A Sound of Thunder - Udoroth 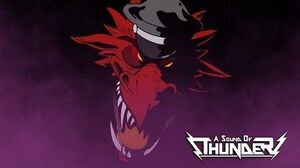 Retrieved from "https://villains.fandom.com/wiki/Udoroth?oldid=3827088"
Community content is available under CC-BY-SA unless otherwise noted.