Killing Orcs who disobey or irritate him

Deliver Merry and Pippin to Isengard alive and unspoiled.

Uglúk is the leader of Saruman's Uruk-hai scouts in The Lord of the Rings books (and the movies after Lurtz is killed by Aragorn). He is an ill-tempered and vicious Uruk-hai leader who looks down on the Orcs accompanying him and his fellow Uruk-hai, and in fact, outright kills Orcs who become insubordinate. The movie version takes it further by then cannibalizing the Orc the just beheaded along with his fellow Uruk-hai (also uttering the now-famous line "Looks like meat's back on the menu, boys!").

Uglúk's fate in the books is ambiguous, but in the movies, when the Riders of Rohan led by Éomer attack him and his band, they kill all of the Uruk-hai (Éomer later confirms they left none alive). Though Uglúk's death is not shown onscreen, his severed head is later found mounted on a pike, proving that he was indeed killed.

He is playable in the Gameboy Advance version of the video game Lord of the Rings: The Third Age if the player is playing the evil campaign.

While somewhat ruthless and potentially a man-eater like most of the Orcs, Uglúk had traits that are genuinely respectable, such as standing up for his clan of fellow Uruk-hai. Ugluk even somewhat respected his enemies should they be courageous and bold. While Uglúk's orders from Saruman were to deliver the Hobbits alive and unspoiled and him keeping them safe were because of Saruman's orders, it still did not change the fact that Ugluk helped Merry to heal with medicine (albeit forcefully making Merry drink the grog). 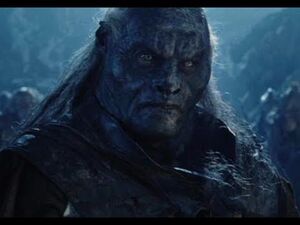 The Lord of the rings- The best of Uglúk, the most attentive Uruk Hai HD