Arguing with Touch Me.

Take over the world by creating an army of his own and lead a conquest.

Ulbert Alain Odle is a minor character from the light novel series Overlord. He was one of the 41 Supreme Beings and a former guild member of the guild, Ainz Ooal Gown. Like many of the other Supreme Beings, Ulbert created his very own NPC, Demiurge, who serves as the Guardian of the 7th Floor in Nazarick.

In reality, he was a young man that suffered from a tragic childhood, dealing with the loss of his parents and the lack of proper education.

Ulbert's in-game avatar had the appearance of a goat-like monster that wore a black suit, equipped with a red flower on his left shoulder, a red cape and a hat. He also wore a mask that covered his right eye.

Not much is known about Ulbert in terms of his personality, but he was described to suffer from "chuunibyou", meaning that he came off as being arrogant and prideful. He was also known to have a very fixated fascination on the concept and idea of evil itself. Since NPCs carry over the traits of their creators, it can be assumed that Ulbert was just as, if not, more cunning and sinister than Demiurge.

Similar to Demiurge's relationship with Sebas, he would often get in quarrels with Touch Me, due to their conflicting philosophies and opinions. While Touch Me would seek out to aid those in need and do the right things, Ulbert was more of a mischievous person that acted out on logic, regardless of what was right or wrong. Despite this, Momonga believed he was a good friend and that he ultimately did indeed care for his friends.

In the real world, Ulbert was a young man who grew up in a poor family. His parents had passed away and the insurance was paid poorly. As a result, he had a poor education, in which he only made it through elementary school. Since then, he's developed a hatred for humanity, which would later play a role in his character.

Eventually, Ulbert got the chance to play YGGDRASIL, where he made lots of new friends. During his time on YGGDRASIL, he had killed a player at one point in order to gain the "World Disaster" class. Ulbert later developed a fixation on a World Item that would allow him to summon an army of demons, powerful enough to take over the world.

Ulbert spent much of his time replicating the item. He eventually made a prototype of it, but greatly disliked it and planned to get rid of it. However, Momonga ultimately kept it, believing that such a weapon could not be thrown away. Eventually, Ulbert's World Item was finished as the Armageddon Evil Statue and was given to his NPC, Demiurge.

Ulbert later conquered Nazarick, alongside his guild members. He then created the 7th Floor and assigned Demiurge to be the Guardian of the 7th Floor. Ulbert then disappeared along with the rest of the Supreme Beings, leaving Momonga behind.

Ulbert was said to be the most powerful sorcerer among his guild members in terms of his sheer damage output alone. He was seemingly the sole user in YGGDRASIL of the magic class known as "World Disaster", which could only be obtained by killing a previous holder of said class. With the equipped items he had, he had numerous abilities that included: 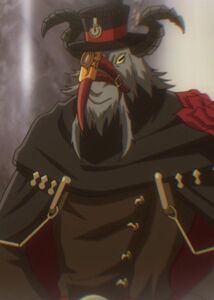 Ulbert depicted in the anime. 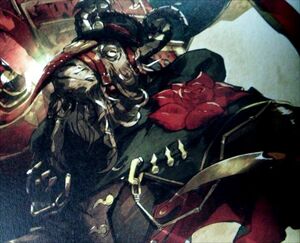 Ulbert depicted in the light novel.
Add a photo to this gallery

Retrieved from "https://villains.fandom.com/wiki/Ulbert_Alain_Odle?oldid=3531059"
Community content is available under CC-BY-SA unless otherwise noted.