Star Wars: Tales of the Jedi

Conquering planets in the name of the Sith

Stop Sith influence from spreading across the Galaxy (formerly).

Get revenge on Satal Keto for the death of his Master (succeeded).
Overthrow the Republic (formerly)
Bring about a new Golden Age of the Sith(formerly).
Atone for his crimes

Ulic Qel-Droma was a Jedi who turned to the dark side and became the Sith Apprentice of Exar Kun and the secondary antagonist in Tales of the Jedi - Dark Lords of the Sith.

Ulic and his allies from the Jedi Order were sent to end the Beast Wars on Onderon and helped the Beast Riders fight against the Royal Family who served the dark side. He plans to infiltrate the Krath but was brought to their leader for questioning. The leader injects Ulic with a rage-fueled poison that corrupts him into giving into the dark side. Ulic encounters another Jedi Exar Kun and duels him. The ghost of Marka Ragnos stopped the fight and named both Kun and Ulic Dark Lords of the Sith with Kun being the master.

The two new Sith Lords declared war on both the Republic and the Jedi Order. Qel'Droma led his forces to attack Coruscant but it failed. Ulic was captured by the Jedi to stand trial for his actions but was rescued by Exar Kun. After the incident on Coruscant, he joined Exar into invading Ossus. On the planet, Ulic confronted and killed his brother Cay.

Nomi Sunrider witnessed the murder of Cay and removed Ulic of his Force powers. Ulic leaves the Sith Order after losing his force abilities and murdering Cay. After the end of the war and the death of his former master, Ulic was killed years later while in exile by a spacer. 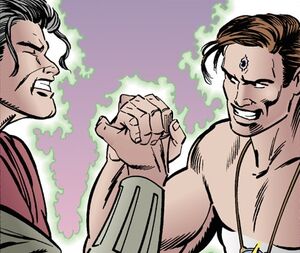 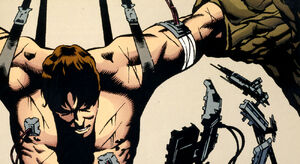