The Ultimate Being is the final boss of the action/horror RPG videogame Parasite Eve, which is based on the 1995 Japanese sci-fi novel Parasite Eve (in Japanese: パラサイト・イヴ, Parasaito Ivu) by Hideaki Sena. A horrible mutated humanoid creature of apocalyptic intents, its very existence caused living beings to self-combust and thus made it a real danger to the entire world. It refers to two individual creatures of the same name that are both related to Mitochondria Eve and NMC. It can be considered as the ultimate NMC and ultimately the pinnacle of Eve as well as her child (after she managed to conceive the monstrosity in order to pave way for the final battle) and later Neo Ark's design.

After obtaining a gamete from Dr. Toshiaki Nagashima, Eve inseminates her embryo into a young patient, Mariko Anzai, who almost give birth immediately to a humanoid being. Dr. Nagashima assumed that the Ultimate Being would be similar to Eve and would change its genetic codes by its will. Shortening millions of years of evolution into mere minutes.

Eventually because the sperm Eve obtained from Dr. Nagashima had a line of male mitochondria which will be extinct if Eve's mitochondrial strain becomes dominant, a rebellion takes place within the ultimate being's body causing it to switch between male and female.

Eventually Dr. Nagashima comforts the creature and tells that it can have as many offspring as it or she wants but she will never reproduce her father. He then embraces and hold the creature as it dies to avoid the energy unleashed from killing any more people.

The Ultimate Being, the ultimate mitochondrial life-form, grew inside the womb of the second Eve until she was defeated by Aya Brea near the Statue of Liberty. It was created by Eve with sperm created by Dr. Hans Klamp. This sperm has no paternal mitochondria, so it cannot interfere with Eve’s mitochondria when the Ultimate Being was created. When Eve is defeated for the final time, she becomes one with the sea of orange goop. When it first is noticed, it rocks the boat Aya and her companions are on before freeing itself from the womb within the sea of orange goop with a baby-like cry. As soon as it begins to use its wings to pull itself up, nearby ships explode without even being touched. Maeda tries to give Aya something important but is forced to leave by Daniel Dollis. Aya ends up alone on the landing zone of the boat to fight the Ultimate Being in a final battle. After it climbs over the side of the boat, the Ultimate Being zones in on Aya before crawling towards her in determination and the final battle begins.

After its first defeat, the Ultimate Being transforms into its second, Child, stage. This form features a larger, more inhuman, Ultimate Being with two large wings. Eventually the two parts separate and the Child begins to crawl around while the wings attack Aya with energy beams. The Child fires a long pink beam across the battlefield, it can attack Aya with its claw, and can even leap to Aya when she is far away. The wings fire several energy balls to Aya. It also create a electric wall through its claw and start to fly toward Aya. If it missed it will turn around and try to hit her again. It is recommended to have Burst Shot effect added on your gun.

This form has the Ultimate Being become a more humanoid shape and continues its assault. It features a number of powerful attacks such as a high powered energy blast, grabbing and throwing Aya, which reduces her HP to 1 along with an attack that fires several energy spheres at Aya.

This is the final form of the Ultimate Being with its fight with Aya. As they watch from the helicopter above, Kunihiko Maeda shows Daniel what it was he was trying to give Aya before the battle began: bullets specially made with Aya's cells inside them. Daniel takes the bullets from him and jumps off the helicopter and as he falls towards them he spontaneously combusts, but throws the bullets to Aya. Aya catches them and watches in surprise as Daniel falls into the ocean. She then realizes what she must do and loads the bullets into her gun before battling again.

After the battle, the Ultimate Being begins to fall apart before landing in a lightly dazed state. As Aya turns to try and figure out what happened to Daniel, the nearly dead Ultimate Being begins to chase after her. Running through the interior of the ship, Aya decides to turn the broiler pressure all the way to its limit to use the boat itself as a bomb. She turns on the heat and heads towards her escape as it gives chase again, just as she makes it outside and jumps off the edge of the boat it explodes with the Ultimate Being Adult still inside. 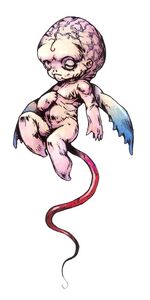 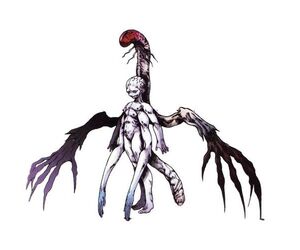 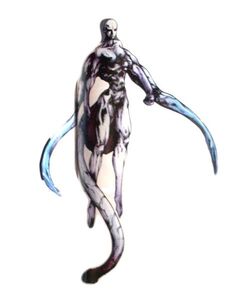 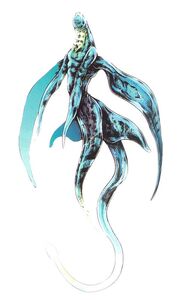 Ultimate Being (adult).
Add a photo to this gallery
Retrieved from "https://villains.fandom.com/wiki/Ultimate_Being?oldid=3495325"
Community content is available under CC-BY-SA unless otherwise noted.