Kill anything that it finds.

The Ultimate Chimera, or simply just known as "The Chimera", is a monstrous creature created by the Pigmask Army and serves as a major threat in the video game Mother 3.

The Ultimate Chimera was created by Dr. Andonuts in the Chimera Laboratory in part of the Chimera project. It was intended to be the ultimate killing machine, but went rogue before its last weakness, a power button on its back, could be removed. During Lucas's infiltration of the laboratory, Salsa the monkey unintentionally let the Chimera out of its cage. Lucas must avoid the Chimera at all costs, as contact with it causes an instant game over. After Lucas finds the lab monkeys and Dr. Andonuts in the basement, the Ultimate Chimera ambushes them on their way out. Just before it is able to finish them off, Salsa runs up from behind and pushes the button, turning the Chimera off. However, after Lucas departs with Boney, the monkeys, and Dr. Andonuts, the bird on the Ultimate Chimera's head pushes the button, reviving it.

The Ultimate Chimera first appeared in Super Smash Bros. Brawl as a hazard on the New Pork City stage. It temporarily appears and slowly walks towards a section of the stage. When a fighter gets too close, it bites them, causing 100% damage and extreme knockback, enough for a guaranteed instant KO. It is impossible to defeat the Chimera, although it can be indirectly defeated by destroying the bridge platform at the bottom of the screen while it is on it, causing it to fall off-screen. It will still spawn again afterwards.

The Ultimate Chimera appears as a trophy, which can be used as an item in the Smash Tour mode. It allows the player to steal two fighters instead of one from the last opponent they defeated.

The Ultimate Chimera returns as a hazard for the New Pork City stage. Unlike in Super Smash Bros. Brawl, being attacked by the Chimera causes an instant KO instead of being launched. It also appears as a support spirit, summoned by using the cores from Blargg and Pyoro. Its ability increases the chances to deal a Critical Hit. 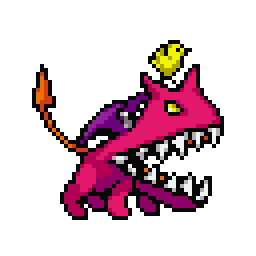