The Ultimate Elementor is a tall creature that has a hump on its back. It has one big orb with four orbs within it. It has a sharp jaw and four arms with different elements. He has four fingers on each of hands, two white glowing eyes, a sharp chin, two legs made of water, three toes, a long fiery tail, and pieces of the other Elementors within him. He is incredibly powerful and can change from one Elementor to another Elementor. Their attacks are powerful and much more dangerous in this combined form. 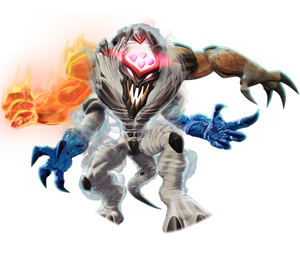 Retrieved from "https://villains.fandom.com/wiki/Ultimate_Elementor?oldid=3892533"
Community content is available under CC-BY-SA unless otherwise noted.