Villains Wiki
Register
Don't have an account?
Sign In
Advertisement
in: Cosmic Entity, Dark Forms, Force of Nature,
and 18 more

Prevent the five Elements from destroying it.

The Ultimate Evil (also known as "Anti-Life", the "Anti-Lifeforce", the Great Evil, and Mr. Shadow) is the main antagonist of the 1997 sci-fi action film The Fifth Element.

The Ultimate Evil is an ancient cosmic force that has for thousands of years tried to destroy Earth after its emergence through a celestial alignment of three planets and one sun which happens every 5,000 years, but each time has been thwarted by the Fifth Element. In the 23rd century, it approaches planet Earth upon finding out that the five elements are no longer in place to stop it. The Evil then tried to get the four elemental stones via grunts, but they failed to get them as the stones were handed to another.

After a few failures, the Ultimate Evil swallowed several satellites and used them to tell its follower Jean-Baptiste Emanuel Zorg, CEO of Zorg Industries, that it would be arriving soon. By the end of the film, The Evil is once again thwarted by the power of the Fifth Element, killing it forever.

Little to nothing is known about the personality of the Ultimate Evil. However, it's known he is sapient. His only goal seems to be ending all life in the universe. He is able to take a polite tone, seen when he asked Zorg if he is disturbing him. Given how the latter is afraid when Mr Shadow asks about the Stones containing the 4 classical elements that brings life, it is very likely the entity has little to no tolerance of failure. It is strongly implied nevertheless, that all of this is because he is made of evil and knows only to be evil.

The Ultimate Evil cannot be killed by force. Any military weapons fired at it will only nourish it. The Ultimate Evil can annihilate anyone who gets too close to it without even trying due to its dark energy. It also possesses the ability to communicate by swallowing up several satellites. When Zorg talks to the Evil on the phone, he is shown cringing in pain just from hearing its voice. Anyone who approaches or hears the Ultimate Evil will sweat a mysterious brown liquid (possibly blood).

If the Ultimate Evil can get to the altar within the Temple of the Elements without any interference from the Fifth Element, it will use the power from the other four Elements to bring about untold horrors for thousands of years.

Its only weakness is the Fifth Element, powered by the other four Elements. 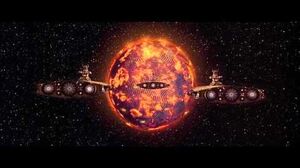