Killing anyone that gets in his way.

Prevent the Predator Killer from being delivered to humanity and kill anyone who stands in his way.
Kidnap Rory McKenna and use his DNA to become one of the most powerful and strongest augmented Yautja in his clan.
Kill Quinn McKenna (all failed).

The Ultimate Predator, also known as the Assassin Predator or the Upgraded Predator, is the main antagonist of the 2018 science-fiction action horror film The Predator, the fourth installment of the Predator franchise.

He is an augmented super-soldier Yautja who was deployed by his people to kill the Fugitive Predator and prevent him from delivering the "Predator Killer" to humanity so that they could fend off an invasion of some kind, although it was only able to succeed due to underestimating the main protagonist Quinn McKenna.

He was voiced and motion captured by Brian A. Prince and Kyle Strauts.

Not much is known about the Ultimate Predator, other than that he hails from a clan of Yautja who performed genetic augmentations on themselves called hybridization. Their DNA is made up of many different and most challenging lifeforms in the galaxy, giving them powerful abilities and enhanced physiology, stronger exoskeleton and skin. In addition, the Ultimate Predator's clan appears to have a feud against the Fugitive Predator's clan, probably because of the latter's decision to give humanity a piece of their technology.

Upon entering Earth's atmosphere with his ship, the Upgraded Predator found himself facing an unforeseen implication when Quinn McKenna's son Rory messed with the Fugitive's device, causing his ship to decloak and the military to send F-22's to check out the disturbance. Despite this, the Ultimate Predator managed to restore control over his ship's system and elude his pursuers, but did attack one of them in a dogfight.

Tracking Down and Killing the Fugitive

The Ultimate Predator reported to his clan on the situation, and his superiors asked him if there were any leads on finding the Fugitive Predator's spaceship, and he responded that the humans were. The Ultimate Predator then went to Quinn's home, and found Rory's map to the location of the spaceship. As this happens, the government agents make their way to Fugitive’s ship while the Loonies attempt to free Rory from their grasp. Ultimate soon catches up to them and interrupted the fight by killing Lynch and many military personnel, and enters the Fugitive Predator’s spaceship.

Upon discovering that the government had set up a translation device to intercept his race's language, the Ultimate Predator tells the Loonies and surviving government men that he is going to dispose of the spaceship. He then issues a challenge on them and states that McKenna is a true warrior, that he will lead them, and offers them time advantage. When speaking of the true warrior, he was speaking of Rory, whose autism is believed to be the next step of human evolution, and the Ultimate wants his DNA to augmentation himself and his clan.

During the hunt, the Ultimate Predator is injured when firing his wrist blades on Casey, and who responded by firing the Fugitive's mask plasma caster at him. After defeating Baxley and Coyle, the Ultimate Predator kidnapped Rory and took him to his spaceship, so he could deliver the boy to his clan. When going away, the ship is damaged when Nebraska sacrifices himself by sliding into the ship's engine, and sending the spaceship back on Earth. Quinn gets inside the ship and confronts the Ultimate Predator, who restrains him with his harpoon weapon and sends him tumbling out of his crashed ship in the process.

Despite suffering from injuries sustained from the crash, Ultimate Predator continued his fight against Quinn and Casey. Rory aided the two by severing the Ultimate's right arm by using the ship's force field, but it didn't kill the upgraded alien. During the fight, the Ultimate's lobotomized hellhound aids the group by giving the Ultimate's severed right arm to Quinn, allowing him to shoot an explosive at the alien's leg, blowing up and dismembering Ultimate. Quinn then asked the Ultimate Predator a final question before deciding to kill the alien by shooting him in the head multiple times.

Having augmented himself with DNA from various lifeforms across the galaxy, Ultimate Predator developed a great deal of confidence to the point of arrogance. However, he later became surprised by the humans' determination and skills, and decided to leave Earth after kidnapping Rory. Although interested on Rory's autism, he is obsessed to become one of the strongest augmented Yautja in his clan and develop disdain towards weaker members of his race. 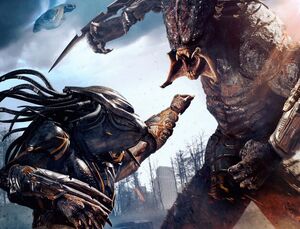 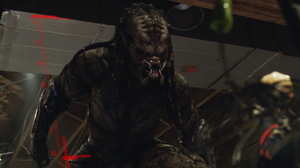 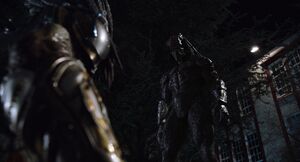 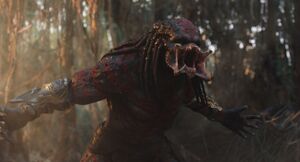 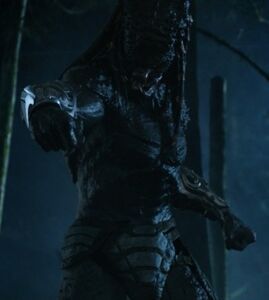 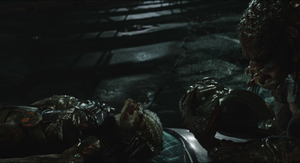 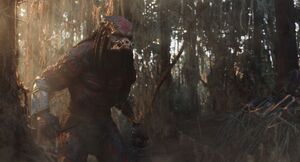 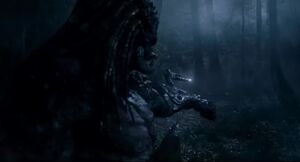 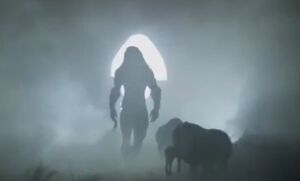 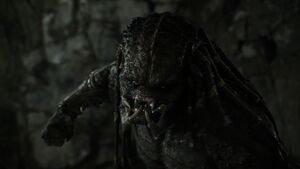 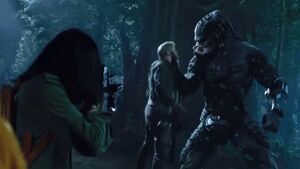 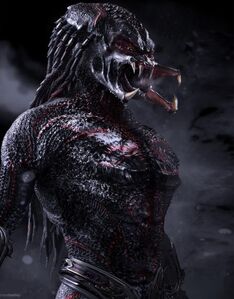 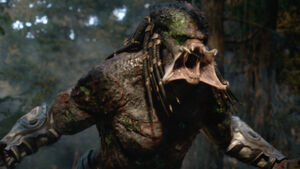 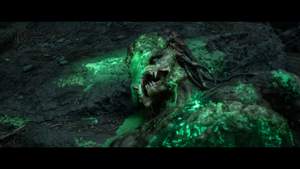 Ultimate Predator's death.
Add a photo to this gallery

Retrieved from "https://villains.fandom.com/wiki/Ultimate_Predator?oldid=3469028"
Community content is available under CC-BY-SA unless otherwise noted.