Rid the universe of music.

Rule the universe as its god.
Kill the Teen Titans (all failed).

Neil Adams, better known as Ultralak, is the main antagonist of the five-part mini-series The Night Begins to Shine 2: You're The One of Teen Titans Go!. He was formerly the fourth member of B.E.R. and is now a tyrannical warlord bent on conquering the world.

Neil Adams used to be the rhythm guitarist of B.E.R. One day the band was transported to a dimension, and they flourished it with their music. Nonetheless, Neil eventually grew greedy and began to sought for power.

His bandmates disagreed with his power hungry attitude, so in a fit of rage, Neil quit the band and isolated himself in a mountain cave for eons. During his isolation, he discovered the power of dark silence, and created a powerful army that destroyed Sweet and anyone who disagrees with him.

After knowing that the Titans had returned to the dimension, Ultralak confronted them for the first time. The Titans tried their hardest to battle him, but he overpowered them, and even mercilessly finished off Cyborg.

Ultralak is a ruthless and cruel man. He had no qualms on destroying Cyborg, trying to rid the entire universe of it's music, and even killed those that were not willing to help him, as well as betraying his former friends. Ultralak is incredibly power-hungry with a massive god complex who wants to rule the world as a living god. 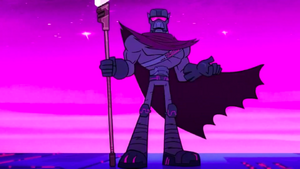