Leader of the Crime Syndicate

Threaten the world with the QED bomb so he has absolute power (failed).

Ultraman is the secondary antagonist of the DC animated original Justice League: Crisis on Two Earths and the evil doppelganger of Superman and the archenemy of Lex Luthor of their Earth.

He was voiced by Brian Bloom.

Although his past in an alternate dimension is unexplained, he is the leader of an evil organization known as the Crime Syndicate.

He and his teammates appeared before Lex Luthor after he tried to escape, outraged to see one of their members killed. Luthor, on the other hand, grabbed out a device and teleported him away as he activated it, revealing it to be a dimensional travel device. Ultraman frowned upon seeing that.

Ultraman called a meeting in order to discuss the vacuum caused by the death of J'edd J'arkus. The meeting soon turns to Owlman discussing his plan to the Crime Syndicate about using a bomb called the Quantum Eigenstate Device that is capable of destroying an entire planet. When Ultraman learns about it, he announces that the governments of the world has two choices: bow down to the Crime Syndicate or die.

Ultraman later appears before Lex Luthor as he and Superman take on Olsen, whose watch they used to summon him. Lex takes on Ultraman, but could barely harm him. Ultraman was about to kill Lex Luthor until Luthor got out a piece of blue Kryptonite, weakening Ultraman. The villain questioned this as he destroyed all Kryptonite on Earth but Lex reveals he found it on another earth from his dimension traveling. He turned the tables on Ultraman and defeated him as he and Olsen were then arrested, but Ultraman was then freed by the President, who was under Ultraman's influence ever since the Crime Syndicate killed his wife.

Ultraman appears before President Wilson at the White House, threatening to kill his daughter who is encouraging to stand up to the Crime Syndicate. President Wilson, angered, threatened Ultraman that he will nuke him if he comes near his daughter. Ultraman slaps Wilson in the face, telling him that his team is working on a bomb to equalize the nukes, before leaving.

After Batman stopped Owlman and after Johnny Quick died from ageing to an old man, he tells the Justice League to leave his base. However, Martian Manhunter and President Wilson appeared at the moon base with the army. As their plan failed, and after many leading members have died or were defeated, Ultraman had no choice but to surrender himself along with a few founding members of the Crime Syndicate.

Ultraman has indistinguishable powers from his dimensional counterpart, aside from having a shortcoming to blue Kryptonite rather than green. Ultraman possesses Superhuman Strength, Superhuman Speed, Invulnerability, Flight, Heat Vision, Super-Breath, and Enhanced Hearing 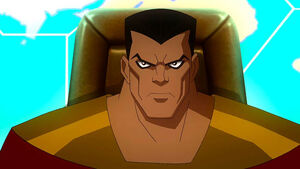 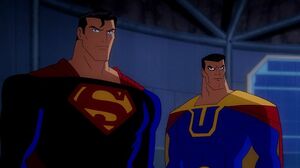 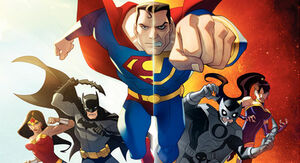 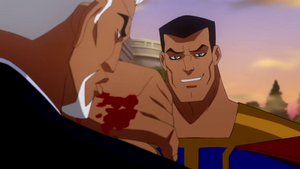