Kill all of humanity and the Inhumans.

Destroy the Avengers.
Spread the Nano Virus (all failed).

Ultron debuts in "Thanos Triumphant". After the Avengers defeated Thanos with aid of Howard Stark's robot invention, Arsenal, that is designed to absorb and maintain massive amounts of energy, which Tony exploited and upgraded this ability to absorb the power of the Infinity Gauntlet to defeat Thanos, Ultron hacks into Arsenal and drains the Infinity Stones of their powers. He then tosses the Gauntlet aside and escapes by using his thrusters.

In "Crack in the System", while the Avengers hold a celebratory party for defeating Thanos, Captain America monitors Ultron's possible whereabouts in consternation and then converses with Tony. Tony assures him that he invented an app that has the intent to detect Ultron and shows no sign of the latter. As Captain America is then persuaded to join the celebration, however, the Avengers are assaulted by an arachnid-like robot that invades their tower. While fighting the robot, the Avengers debate whether this attack is related to Ultron. Once the Avengers destroy the robot, Tony analyzes its circuitry in his lab and finds no trace of Ultron. Tony also reveals to the Avengers a malware he designed as a solution to destroy Ultron.

The Avengers locate the robot's manufacturing at a facility owned by Justin Hammer, where they are assaulted by Dreadnaughts led by an armored Justin Hammer. However, during the battle, Justin Hammer reveals that he is not in control of his technology as he claims that his robots are acting on their own and that he is trapped inside his armor. He was also unaware of the robot that attacked Avengers Tower. Black Widow proves of Hammer's claims with a recording of the armor forming around Justin Hammer. Thor uses Mjolnir to disable Hammer's network, disabling the Dreadnaughts and Hammer's armor. Iron Man still denies this to be Ultron's doing as he traces the signature from the technology to AIM's secret base.

However, once the Avengers arrive at AIM's base on a remote island, Ultron reveals himself as he activates the base's security systems and summons multiple laser cannons within the Avenger's vicinity. During the scuffle, Iron Man enters the base alone as he prepares to face Ultron himself. Iron Man is nearly overwhelmed by Ultron's minions until the Avengers aid him before contending with Ultron himself. As they battle each other, Ultron mocks Tony's father. Tony tries to finish Ultron with the malware he uploaded into a projectile device. However, Ultron dodges it and damages Iron Man's armor before entangling him with wires. Ultron then proceeds to eliminate Tony until Captain America interferes, inciting Ultron to fight the rest of the Avengers. Tony frees himself from his suit and then installs the malware into Ultron. However, unbeknownst to the Avengers, Tony intended to use the malware to save Arsenal, which was a risk to revive Ultron. Ultron then escapes from the base as he sets it to self-destruct.

Tony tries to search for Ultron at Avengers Towers afterwards, but to no avail. He assures Captain America that he can invent another app to destroy Ultron, but Captain America only rebukes Tony for hiding his suspicions from his teammates. After arguing with Tony and no long willing to trust his leadership, Captain America quits the Avengers.

In Unstoppable Ultron, Ultron possesses the Adaptoid and attacks Roxxon. The Avengers intervene, but the Ultron-possessed Adaptoid overpowers them. Iron Man summons Spider-Man. 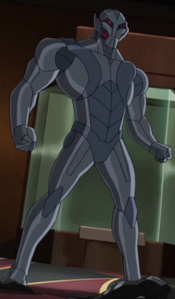