Defeat and kill The Avengers and anyone who stands against him, Take over the entire world and replace humanity with androids


Ultron is the titular main antagonist of the upcoming 2015 superhero sequel, Avengers: Age of Ultron. He is an artificial intelligence dormant peacekeeping program jump-started by Tony Stark. Possessing an eight-foot tall advanced robotic body, Ultron was created by Stark with the purpose of protecting Earth from threats, but eventually deemed humanity itself as the greatest threat to Earth and attempted to create a technological singularity by committing genocide against them.

He is portrayed and voiced by James Spader who played Stewart Swinton in Wolf.

Ultron was designed to protect the planet for the Avengers, but thinks opposite and attempts to wipe out the human race.He eventually grows stronger and stronger, upgrading himself to become a worthy opponent to Earth's Mightiest Heroes (who will later battle him). He creates an army of Ultron Sentinels and uses twins Quicksilver and Scarlet Witch (who will eventually turn on him) to bring rise to human extinction.

Robotic Body: Ultron has a robotic body first constructed by Tony Stark, that over time he was able to upgrade forms, becoming more powerful & more superior.

Ultron's programming was created with emotional responses based on Stark's. He is also quite maniacal and uses dark humor and figure of speech such as describing people as puppets on strings and that he is the only one without strings. He resents his creators and thinks people as killers and fools for not wanting to change the world but trying to control it. 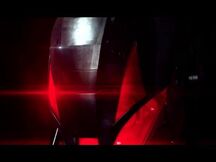 Ultron's concept art head in the comic-con 2013 teaser for Avengers: Age of Ultron

"There are no strings on me." Ultron's true form and Ultron's evil grin

"I'm going to tear you apart."

Ultron in his LEGO form

Ultron uses his laser blast
Add a photo to this gallery

Retrieved from "https://villains.fandom.com/wiki/Ultron_(Marvel_Cinematic_Universe)?oldid=1037875"
Community content is available under CC-BY-SA unless otherwise noted.