Fighting the Avengers and destroying buildings.

The Ultron Sentinels are the main antagonistic faction of the 2015 Marvel film Avengers: Age of Ultron and the first season of the 2021 Marvel animated anthology series What If...?.

They were created by Ultron who needed a number of minions of his disposal, something which foreshadowed by moments when he hijacked a number of Tony Stark's Iron Legion. In What If...?, Infinity Ultron uses them as his armada to wipe out all life in the universe, then setting his sights on the multiverse after gaining awareness of it.

After barely escaped from his prototype body that destroyed by Thor, Ultron goes for HYDRA base at Sokovia through Internet and taking control over machines in there. With his stolen Iron Legion schematics and having studied the unfinished drones that still developed by HYDRA where their developments previously stopped by Avengers, he mass-produced the Sentinels whilst creating more durable body for himself. The first new robots then worked to resume the production whilst Ultron himself rendezvous with Maximoff twins.

When Ultron introduced them to Maximoff twins, there are already less than 20 Sentinels that busily mass produced more machines and more robots to amass an army.

At least 4 to 5 Sentinels deployed at to accompany Ultron and Maximoff twins. Due to the ensuing battle, two of them are destroyed, but the rest managed to acquire the vibranium. 3 of them deployed again both to secure the cradle that contained the newly-built more organic body for Ultron. One of them was destroyed when two of them took the truck’s container away whilst left the truck itself crashes and destroyed the Sentinel whom drove it.

Once the project to replicating the meteor commenced, a wave of them came to attack Novi Grad just as the Avengers arrived. Ultron would possessed some of them to directly communicate with the Avengers on several occasions during the battle. Finally, the final wave of them, which are the overall remained Sentinels which estimated around thousands of them came to reach the device's trigger. Many of them were killed, but when Scarlet Witch suffers the breakdown over Quicksilver's demise, her powers caused the last surviving Sentinels destroyed simultaneously, though Ultron managed to possessed one to activate the device's trigger seconds before that robotic body became useless. Not long after his plans failed, Ultron used the last and remaining least fully-function body of this Sentinel to confront Vision before being destroyed.

The Ultron Sentinels make no physical appearance in the film, but they are mentioned by Tony Stark in a talk with Captain America. It is later revealed that Helmut Zemo lost his family to the destruction of Sokovia by the Sentinels' rampage. Though Ultron and his Sentinel army were destroyed by the Avengers, Zemo blames the Avengers for causing his family's demise, being aware that they were responsible for the creation of Ultron and the Sentinels in the first place. To make things even worse, Ultron's rampage also caused a major shift in the public opinion of the Avengers, and the world leaders drafted the Sokovia Accords, which only legalizes the world government to have full control of the Avengers to prevent any more world catastrophes. However, Zemo managed to tear the Avengers apart through strategy and manipulation to avenge his family's demise, though he ends up being arrested after accomplishing his goal.

The Ultron Sentries bear a close resemblance to their Master, the primary differences being that they are less bulky, have less armor and are slightly shorter. They have a blue glow that emanates from within their bodies, that turns red when carrying Ultron's consciousness. Unlike Ultron, they are unable to shoot concussive beams from their fingers. Instead, they are able to transform their arms into cannons.

The Ultron Sentinels being unleashed.

Ultron Sentinels flying during the Battle of Sokovia.

Ultron hijacking Iron Legion, which the design became the basis for Ultron Sentinels. 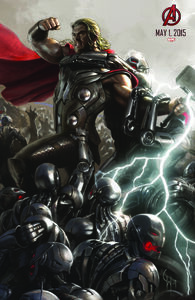 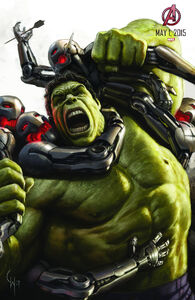 Unfinished androids in Strucker's base, which became another basis for Ultron Sentinel.