Ultros (also known as Orthos) is a villain from Final Fantasy VI, who acts more as comic relief than a real threat. He is a large, carnivorous, purple octopus who antagonizes the Returners.

Ultros appears in the Whisperwind Cove in all releases following "Dawn of Souls". He is the boss of the 20th floor, and attacks using Ink to blind all party members. He drops the Rune Staff upon defeat.

Ultros attacks the party in the Depths of the True Moon. He is only fought in the Wii and PSP versions. He will tend to comment on the last person who attacked him, berating the "muscle men" while remarking on the cute girls. He serves no role in this game, although after defeating him, Rydia remarks that he did not seem like a bad person, albeit a little strange.

Ultros first attacks the group, intending to eat them, when they take a raft to escort Banon to Narshe. He is defeated and tries to run, but Sabin jumps in the water to finish him off, only to be taken by the fast currents.

Later, when the Returners plan to recruit Setzer by having Celes perform in the opera Maria and Draco disguised as Maria, Ultros attempts to foil their plan by sabotaging the opera via dropping a heavy weight on Celes. Locke and the others spot him on the rafters and all fall onto the stage, knocking out the male leads, Draco and Ralse. The party then fight against Ultros again, with Ultros intending to eat the party yet again, and the Impresario improvising it as part of the opera. After defeating him, Ultros fled after another failed attempt to eat them.

Ultros attacks again in the Esper Cave, where he tries to steal the Goddess Statues to show them to his rival, Siegfried. He then attacks Terra, Locke, and Strago, hoping to eat them, but then, Relm shows up, wanting to paint a portrait of Ultros. Ultros scolds her, but Terra and Locke convince Ultros to allow Relm to paint a portrait of him, which in turn attacks Ultros, forcing him to flee when he realizes what an "ugly octopus" he looks like.

He attacks the Returners for the last time when they try to reach the Floating Continent, this time bringing along his friend, Typhon (originally called Chupon). This time, Ultros intends to eat the Returners once and for all. Ultros is again defeated, and Typhon sneezes them out of the airship.

After the end of the world, Ultros starts working as the receptionist in the Dragon's Neck Colosseum, as he had been forced to pay a huge debt he had with the owner.

Ultros is an opponent in the DLC coliseum match "Uninvited Invertebrate". Before the battle, he unsuccessfully flirts with Serah before being called out by Noel, angering him to call Typhon in aiding him to defeat the two. After their defeat, Ultros tries to make a run for it, only for Sarah to use arrows to pin his tentacles down before she and Noel combine their fire magic to fry Ultros. If the Cinematic Action was perfected, Ultros can be recruited into the Paradigm Pack with the Synergist role.

In the Hilibrand sidequests for patch 2.4, Ultros serves as the receptionist for Dour Meadow at Master Fygreis' Coliseum. He uses Typhon and Gilgamesh to sabotage the competitors by making it seem like Avia can use Tempest Blade, when really it is the work of Typhon. Once the deception is revealed, Ultros and Typhon challenge the player in the Dragon's Neck arena. After losing, he attends the award ceremony where he and Gilgamesh are blown away by Typhon's sneeze.

Ultros also appeared during the 2017 Moonfire Faire event during the special mission "The Summer of Ultros". In it, the player is sent out to subdue Ultros before he could harass the people on the beach. After the player defeats him, he apologizes and promises to be good.

Ultros is first encountered by Terra while searching for someone who was causing trouble in the area by Quistis. Ultros offers to help her out and asks her to follow him to the suspect's lair. Instead, he takes her elsewhere and shows his true intentions of eating her. Lann and Reynn come to Terra's rescue and defeat Ultros, blasting him away into the sky.

Ultros later crashes into a library during Celes looking for the libretto to practice her opera that night. He perverts on Celes and threatens to sabotage the library with his ink before Cloud, Lann, and Reynn defeat him. As he dies, Ultros remarks that he knew that the estate market would crash. 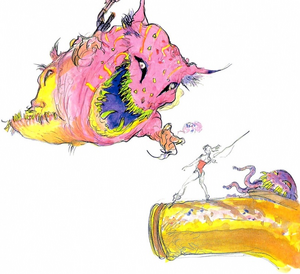