NOTE: This article is about the incarnation of Ulysses Klaue from the Marvel Cinematic film series. The mainstream version can be found here: Klaw (Marvel).

Profit of stealing vibranium and selling it (failed).

He is a notorious black market arms dealer and smuggler infamous for smuggling vibranium out of the isolated African nation of Wakanda, also a former member of the Intelligencia. For a long time his family has been the archenemy of the Wakandan Royal Family. He was an associate of Erik Killmonger until his betrayal.

He was portrayed by Andy Serkis, who also played Gollum in The Lord of the Rings trilogy, Kertasnikir in Netflix's Hilda, Mr. Grin in Stormbreaker, Spike in Flushed Away, Capricorn in Inkheart and Supreme Leader Snoke in the Star Wars sequel trilogy.

Ulysses Klaue is a manipulative, deceitful, greedy and horrifyingly ruthless individual. He commits murder and mayhem with glee and commands his army of henchmen with an iron fist. He claims to be terrified of cuttlefish, though this may just be part of his taunting Wanda Maximoff.

Klaue is a nefarious black market arms dealer, smuggler, and gangster who operates out of South Africa. He is obsessed with gaining Vibranium metal at any cost and has successfully stolen it from Wakanda once.

Klaue is known to Tony Stark from the Stark Industries' time as weapons dealer. After a run-in with Ultron that results in the loss of his arm, Klaue comes into conflict once again with Wakanda through his partnership with Wakandan exile Erik Killmonger.

Nothing is known about Klaue's early life other than that he was born in South Africa. It is, however, known that before the events of Age of Ultron, he successfully stole a large quantity of vibranium from Wakanda. He escapes alive but scarred, becoming one of the few people outside of Wakanda who knows the truth of the country's wealth and technological advancement.

In the film, Klaue is first shown talking with an associate, whom he threatens to kill. As he takes a second call, the lights go out and Klaue, who has picked up a gun, is disarmed by Quicksilver. Klaue recognizes the Maximoffs and, after toying with them dismissively, demands to speak to "the man in charge."

The one in charge is Ultron, who pays Klaue several billion dollars for vibranium. But this relationship quickly sours: Ultron says something Klaue recognizes from Tony Stark and accuses Ultron of being "one of his." This enrages Ultron, who cuts of Klaue's arm, then apologizes while kicking Klaw down a flight of stairs. Klaue manages to escape with his life when the Avengers interrupt Ultron's monologuing before engaging into a fight against him and his army of Sentinels. As Klaue escapes, he angrily orders his mercenaries to fight back against both Ultron and the Avengers. It is unknown what happened to Klaue after the Avengers defeated Ultron in Sokovia.

Some time later, Klaue reappears working with Erik Killmonger to steal artifacts from a museum in London. He gleefully kills multiple people during the heist and reveals what he calls "just a taste" of the power of his prosthetic hand, which he has implanted himself following Ultron's death.

In Wakanda, T'Challa and the Wakandan Council discuss the theft and Klaue's history with Wakanda. We find out that the last time Klaue was in Wakanda—some 30 years prior—he killed many people, including the family of W'Kabi (the head of Wakanda's Border Tribe and best friend to T'Challa). T'Challa plans to apprehend Klaue at an underground gambling establishment in Korea, where Klaue will be selling vibranium to an unknown buyer. W'Kabi blames T'Challa's father T'Chaka for not bringing Klaue to justice long ago and exacts a promise from T'Challa: kill Klaue on sight or bring him back to Wakanda as his father failed to do.

T'challa, Nakia, and Okoye (with Shuri assisting remotely) arrive at the club and find that the mysterious buyer is CIA agent Everett Ross. A chaotic firefight ensues, Klaue and his henchmen escape with T'Challa and the others in pursuit. After a road chase in which the powerful sonic cannon in Klaue's prosthesis temporarily gives him the upper hand, Klaue is eventually taken into Ross's custody.

Klaue glibly mocks Ross during his interrogation and reveals the true nature of Wakanda. Before Ross has much of a chance to question T'Challa about Klaue's claims, Nakia runs in with a warning that something is up out back. Just then, Killmonger, Linbani and Linda blow through the wall and free Klaue. But this relationship also sours quickly: Killmonger wants to go to Wakanda after killing Linbani, so Klaue takes Linda hostage, using her as a human shield. Killmonger assures Linda that everything will be fine, but kills her with no hesitation or remorse. After a bit of a gunfight, Killmonger manages to shoot Klaue, who was at a disadvantage with only one arm.

Klaue sneers at Killmonger's supposed stupidity for wanting to go to Wakanda, showing him a brand they gave him while he was there as a sign of what happens to outsiders and asks Killmonger what makes him think he can get in. Killmonger shows him the hidden markings under his lips (his true name, N'Jadaka), revealing that he is the son of Prince N'Jobu, the very same Wakandan who was in league with Klaue before his death. Realizing this, Klaue simply finds it amusing to be played by someone he thought to be "...just some crazy American", and laughs maniacally before Killmonger kills him with another shot. Killmonger brings Klaue's body to Wakanda and delivers it to W'Kabi in order to be allowed to enter the country as part of his plan to overthrow T'Challa.

Klaue had possessed many abilities, such as:

Klaue threatens a buyer for his poor deals.

Klaue mocks both of the Maximoff twins.

Klaue is violently confronted by Ultron.

Klaue makes a deal for Vibranium with Ultron.

Klaue's arm is sliced off by Ultron in anger.

Klaue orders his men to kill both Ultron and the Avengers.

Klaue and Erik Killmonger find what they want.

Klaue tries to shoot at the Black Panther. 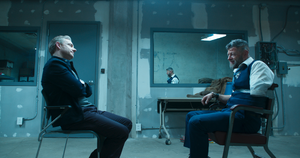 Klaue is interrogated by Everett Ross.

Klaue is rescued by Erik Killmonger. 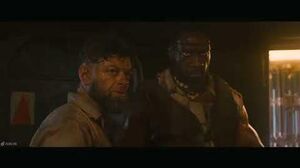 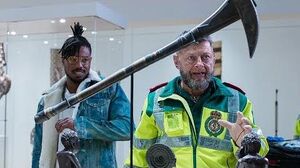 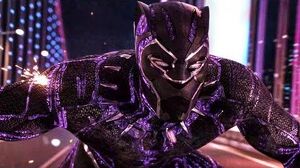 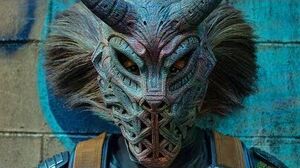 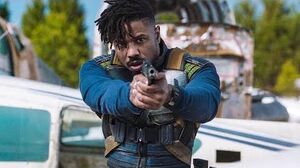 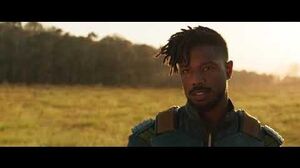