Go on a date with Pamela Anderson (failed).

Break the barrier of the Isle of the Lost (succeeded).

Obtain the Fairy Godmother's wand, and get revenge on Mal (formerly).

She is the daughter of Ursula, and the former archenemy of Mal (alongside Zevon).

She was portrayed by China Anne McClain, who also voiced Freddie Facilier in the first season of Descendants: Wicked World, and Sheena in K.C. Undercover.

Rise of The Isle Of the Lost

Uma was best friends with Mal and Mad Maddy as a child until Mal pulled a prank on her by pretending to fall off of a dock then dumping a bucket of shrimp in her hair leaving it with a permanent disgusting stench. She watched as the VKs went to Auradon and was filled with rage and envy. She eventually befriends Harry Hook who becomes her first mate and gets her own ship. The two later recruit Gil and various others on the Isle to join their crew. She then hears from a customer at the fish and chips shop that King Triton's trident fell into the river on the Isle after Arabella accidentally lost it. On the Isle of the Doomed, Uma and her crew find Yen Sid's "map" and find a trove of magic items. Uma finds her mother's old necklace and puts it back together. With the shell completed, it begins leading Uma to the trident. She finds it's location and swims down to get it. After a brief battle the reformed VKs retrieve the trident, leaving Uma in a fit of rage. At the end of the book, she vows vengeance on Mal and the others.

After the events of the novel Uma and her crew are attempting to break down the barrier between the Isle and Auradon. Uma, Harry, and Gil work together to plot revenge on Mal. Once Mal returns after being put under too much pressure in Auradon, Ben, Evie, Jay and Carlos search for her only for Ben to be kidnapped. Uma then blackmails Mal into giving her the Fairy Godmother's wand in exchange for Ben. Towards the end of the movie she attempts to steal the wand by making Ben fall in love with her. After being confronted Uma leaps into the waters below only to reveal that she too has tentacles just like her mother, she fights Mal in her dragon form before Ben comes between them. At the end of the movie Uma emerges from the water again breaking the fourth wall to the audience hinting at another sequel.

Uma is a misunderstood, vengeful, and sassy individual. She is very ambitious, determined, and short-tempered. She is shown to be very sarcastic and argumentative, and according to Mal is very melodramatic. She holds a grudge against Mal in particular due to the events from their childhoods and how Mal got an opportunity to go to Auradon instead of herself. More than anything, however, Uma is a hurt and envious girl who lashes out, it is rather blatant that her own mother doesn't even care about her and the only people who are known to appear to be Harry and Gil.

Despite being cruel and ruthless, Uma does care about her gang as she had an opportunity to attack Mal from behind, but gave it up to help Harry when he asked her for help.

Uma is a beautiful, average height, dark-skinned girl with thick, long turquoise hair put into braided dreadlocks. Her makeup is lightly made, with an exception to her turquoise colored eye shadow. She wears a turquoise leather jacket that is slightly military looking to represent her leadership and strength as a captain. Uma sports a dark purple mesh shirt under her military jacket as well. She also wears a belt along with a turquoise fringed skirt, (sometimes is seen wearing the skirt with aqua colored leggings) and brown distressed boots. She also wears fingerless, leather black gloves and a sheath to hold her sword. Her pirate hat, leather jacket, and shoes are all distressed. They all are adorned with different types of sea trinkets like shiny little crabs, starfishes, sea shells, octopuses, feathers, nets, and little skulls. She is seen sporting various accessories like her scallywag swag earrings, turquoise and white bead bracelets, her mother Ursula's golden seashell necklace, her pirate crews symbolic pin, and a golden ring.

In Descendants 3 Uma has stopped putting her hair in dreadlocks and her clothes are less flamboyant and more designed for practicality. 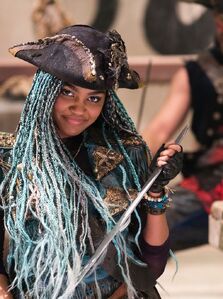 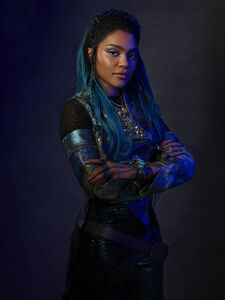 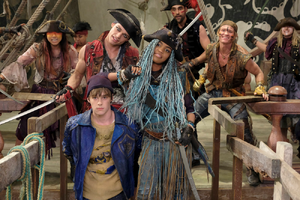 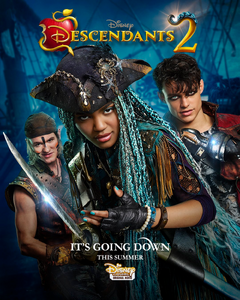 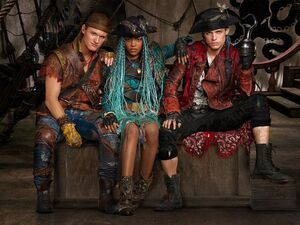