Hunt down the Elemental Creatures and control them (failed).

Umarak is the major antagonist that appeared in the BIONICLE series and also served as the secondary antagonist in Journey To One.  He is an ancient warrior who desired to seek and capture the Elemental Creatures to drain their powers and take control of them in order to free his ally from his imprisonment in the Shadow Realm.

He was voiced by Michael Strickland in the animated series.

Prior of the start of the main series, Umarak was created alongside the Elemental creatures, but unlike them, he was born from the shadows and seeked to hunt the creatures down. In time, the Protectors choose to call him Umarak which means "Shadow Hunter" in their language and came to fear his presence.

The Journey to One

After the defeat of the Skull Lord, Kulta, Makuta came in contact with Umarak and gave him the task of retrieving the Mask of Control.

Uncapable to defeat the toa at first, Umarak relied on the power of the Elemental creatures, and after observing the seven Toa, he deduced that Pohatu had the weakest control over his creature,Ketar, and planned to use them in order to find the Mask.

Umarak entered the Labyrinth of Control, he captured Ketar and forced him to show the path to the Mask of Control. When Pohatu arrived, Umarak viciously threw Ketar off of a cliff, using this for distraction to escape.

With the Mask of Control founded, Umarak thought he needed Makuta no more, and decided to wore the mask. However that was plan of Makuta's plan, transforming him into a monstruous being known as "The Destroyer".

His new mission was to travel to the Stone Region, release a legion of elemental monsters, and open a portal for Makuta to enter. When the Toa arrived, they began the battle with Umarak, until Ekimu struck him down with Light energy, energy that was necesary in order to finish the ritual of summoning. But what Umarak did not anticipate is that Makuta was using him again. then, the Dark Overlord proceed to suck the energy out of Umarak, disintegrating him and killing him for good,leaving the Mask of Control as the only trace left of the Hunter

Being his role as the Hunter, Umarak was skillful in his art of archery. He was armed with his weapon, a Bone Hunting Bow Shooter that can shoot out laser arrows. His control over shadows also allow him to summon both the Shadow Traps and to using shadows to move around . He was known to carry a sword which he can used it as a melee weapon. After his mutation, Umarak doubled his size and strength, and with the Mask of Control was capable of transforming his Shadow Traps into Elemental Monsters.

Umarak had the same ability as the Toa, to unite himself with the Elemental Creatures, although he forced them to do so, unlike the protagonists.

As the Destroyer, Umarak relied on his natural brute strength, his bladed claws and his horns which made up of the horns of the Mask of Control. He became more powerful in this form as he easily defeated the Toa Uniters and Ekimu as well as torn Pridak into half easily with his claws. However, he still retains both the abilitiy to generate his dark power as well as his acid power.

Umarak is as ancient as the island of Okoto itself, connected to the primeval force of darkness. Very patient, tactical and imaginative, Umarak was capable of waiting a long time in order to get his pray, taking advantage of the weakness of those around him. The Shadow Hunter was a ruthless one and had no compassion nor concern for anyone but himself, and so, he was willing to sacrifice peaceful animals such as the Elemental Beast for power.

His fatal flaw was his arrogance, believing that his intelect and cunning surpassed everyone, even Makuta's.

After his transformation, Umarak was brainshawed by Makuta, aldoe he maintained consciousness, he saw Makuta as his unquestionable master. 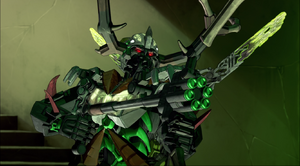 Umarak united with Ketar in the serie. 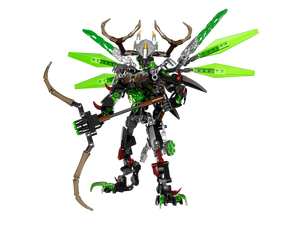 Umarak united with Uxar in set. 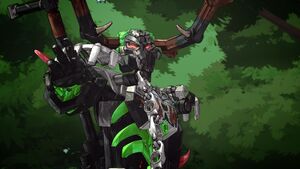 Umarak in the serie. 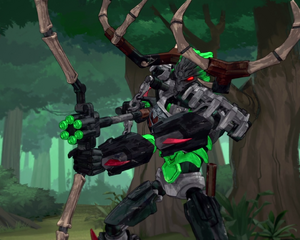 Umarak with his crossbow. 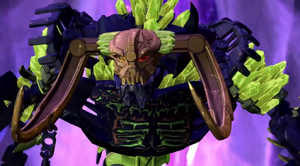 Umarak in destroyer's form in the serie. 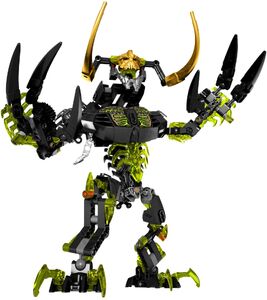 Umarak in destroyer's form in set. 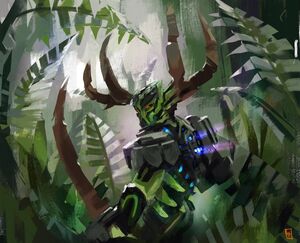