Start a Wiki
Umbra is an anti-villain from the BIONICLE series. He was a mysterious and powerful being who was created by the Great Beings and was ordered to protect the Kanohi Ignika, the Mask of Life.

Although not being evil, he was considered as a neutral character who was willingly to attack anyone who came after the mask.

Umbra was once created by the Great Beings more than 100,000 years ago, for the sole objective of protecting the Ignika. After being created, he was sent to join the Order of Mata Nui shortly thereafter.

Although not its member, he serves as the servant for the Order of Mata Nui. When Mata Nui became the Great Spirit, Umbra was designated by Toa Helryx as the servant of an organization. He was viewed as such because he does the same work that the Order wanted.

A few months later, Umbra was assigned by the Order to journey towards the island called Voya Nui when they learned that the Mask of Life was placed in the Chamber of Light. After his arrival, he makes his way toward Mount Valmai where he became the guardian there as his task was to stop anyone who was attempting towards the mask.

The Quest In Voya Nui

During the main event of the story, a Toa team called the Toa Inika, led by Toa Jaller was on the quest of finding the Ignika in order to save the life of Mata Nui when the latter is on the verge of dying due to Teridax's action. Before arriving into the Chamber of Life, the Toa Inika were confronted by Umbra, who proceed to engage them into battle in order for them to get past into the chamber. Umbra immediately shoot his beam of light to knock out the Toa but the Toa didn't give up so easily. Matoro then used his ice power to 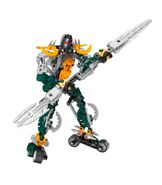 Umbra in his set form
Add a photo to this gallery
Retrieved from "https://villains.fandom.com/wiki/Umbra?oldid=3540316"
Community content is available under CC-BY-SA unless otherwise noted.