Lead the protagonists to their doom.

Umlaut is an antagonist in the video game CarnEvil.

Umlaut is one of the bosses of the light-rail shooter CarnEvil as well the evil theme park's tour guide. He is also the demonic underling and enforcer of Ludwig von Tökkentäkker.

Umlaut appears in the opening cut scene of CarnEvil (which is often played as the INSERT COINS screen on the arcade machine) after the protagonist(s) insert the token into Umlaut's mouth. Umlaut opens his eyes and comes to life, soaring into the air. CarnEvil rises from the ground and Umlaut lunges at the viewer. For the most part, Umlaut acts as a tour guide of sorts by introducing each section of the park via a simple rhyme (which, of course, threatens and insults the player(s). Umlaut also appears on some of the park's decor, such as being the face of the train belonging to Junior, the boss of the Freak Show level.

During the final battle against Ludwig von Tökkentäkker, Umlaut is summoned as a sub-boss to attack the player. He mostly resorts to rush tactics and does damage by biting. The player(s) defeats Umlaut, causing him to break apart, and ultimately goes on to defeat Tökkentäkker. However, when the protagonist(s) find themselves once again in the cemetery before Tökkentäkker's grave, the coin is inserted once more, thus prompting the players to play the game again.

Umlaut behaves as one might expect a floating demonic skeletal jester head to. He cracks wise and insults the player (such as suggesting that the player is an attraction in the Freak Show section). Despite that, Umlaut is also very loyal to Tökkentäkker and acts as something of an enforcer, getting the park in order and attacking anyone at Tökkentäkker's command. It is indicated that some of the other residents of the park view him as a bit of a "kiss ass." 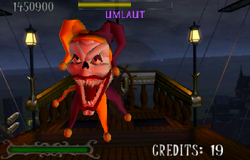 Umlaut during the final encounter on Tökkentäkker's zeppelin. 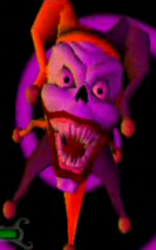 Add a photo to this gallery
Retrieved from "https://villains.fandom.com/wiki/Umlaut?oldid=3884284"
Community content is available under CC-BY-SA unless otherwise noted.