Create a new kingdom (succeeded).
Go to war with the Candy Kingdom (failed).

Uncle Gumbald (simply known as Gumbald), also known as Punch Bowl in the early seasons in his Punch Bowl form, is a major antagonist in Adventure Time, appearing as the main antagonist of Season 10 and one of the final antagonists of the series alongside GOLB.

He is a bubblegum man Princess Bubblegum created to be her uncle when she was young. However, he turned on her and tried to usurp her power but was turned into the candy person known as Punch Bowl who was a recurring extra in the seasons 1-9.

He was voiced by Fred Melamed.

Uncle Gumbald was first mentioned by Princess Bubblegum in "Susan Strong". She states that he cut down thousands of taffy trees in a single night.

In "Hot Diggity Doom", it is revealed that Uncle Gumbald built a cabin outside of the candy kingdom when Princess Bubblegum was young.

He is mention in "The Empress Eyes" when Jake accidently breaks Princess Bubblegum's clock in the forest that used to belong to him.

He first appears at the end of "Three Buckets" where he is picking up Fern's remains in a bucket.

Gumbald then appears at the end of "The Wild Hunt", observing Finn's defeat of his Grumbo creation.

Gumbald along with Cousin Chicle appear in "Always BMO Closing". Chicle is seen in his stealth suit opening to door for BMO and Ice King then disappears. BMO then trades Finn's baby teeth for one of Gumbald's silver goblets. Gumbald then turns the teeth into baby versions of Finn and sends them to attack the treehouse but are soon defeated.

In "Bonnibel Bubblegum", the origins of Uncle Gumbald are revealed in a flashback. A young Bubblegum creates Lolly, Chicle and Gumbald to be her family. They live a simple happy life together until Gumbald starts getting some ideas of his own. He chops down the taffy trees and uses them to build the cabin then starts having plans to build a candy city. However, Bubblegum decides to stop his plans and add a butterscotch lake where Gumbald was going to build his city. Gumbald then gets upset with Bubblegum and grows treacherous to her so he starts to hatch a plan. He, Chicle and Lolly create Mr. Cream Puff to serve as Bubblegum's boyfriend and to keep her busy while they plan to overthrow her.

When Bonnibel gets back, she overhears her relatives insulting her and planning to poison her with a chemical to make her dumb like Mr. Cream Puff. Gumbald then poisons Chicle and Lolly turning them into the simple minded candy people named Crunchy and Manfried. Bubblegum then confronts her Uncle, who voices that he is her equal but she states he is evil as he plans to turn her into candy person and do something about her brother. Angered, Bonnibel uses her pea shooting Taser to spill the poison on him turning Gumbald into Punch Bowl. The three would remain Candy people for eight hundred years with no memories of their past selves and Bonnibel keeping them this way as they seemed happy.

Near the end of "Seventeen", Fern defeats Finn in an armwrestling match and is stopped from killing Finn by Gumbald who reveals himself along with Chicle and Lolly. When Bubblegum asks how they are back, Gumbald simply hints her by saying "Oh my Glob" this causes Bubblegum to realize that when Lumpy Space Princess fixed Ooo from the elements in "Skyhooks II" she also fixed Gumbald, Chicle, and Lolly as well. They voiced their anger at being kept away for centuries as she voices her reason they try to attack her but are backed off by Marceline. They leave but promise they will be back.

In "Marcy and Hunson", Gumbald is mentioned by Peppermint Butler while he is making a new sword for Finn to combat him along with Chicle and Lolly. Cousin Chicle as appears in the episode as the main antagonist as he follows Finn, Jake, and Hunson Abadeer to Marceline's concert in his stealth suit believing Hunson to be Marceline's weakness. Chicle uses his stealth suit to disguise himself as a ghost and make the other ghosts attack Hunson. After being confronted by Finn, Cousin Chicle disappears while laughing maniacally to himself.

He plays a major role in "Gumbaldia". He rules his own kingdom Gumbaldia along with Chicle and Lolly. Candy kingdom and Gumbaldia prepare for war. Finn and Jake decide to negotiate peace and visit Gumbaldia. Lolly seems to support their intention while Gumbald at first seems to oppose. Gumbald then shows Finn and Jake a large cake automaton he'll use to attack the Candy Kingdom. Gumbald then changes his mind when Finn and Jake save his life from falling off a lift. Finn and Jake then get to know more with Gumbald, Lolly and Chicle at dinner. Gumbald agrees to sustain peace and shows will to reconcile with Bubblegum. Chicle pours glitter juice on Finn and Jake during the dinner and accidentally gets some on himself, Gumbald then tells Finn to give Princess Bubblegum and big hug when he and Jake get back to the Candy Kingdom. It is later revealed that the juice is Gumbald's Dum Dum juice which doesn't work on people and dogs. It means that Bubblegum would have been turned dumb if she hugged Finn or Jake. This plan fails and Bubblegum tears the peace treaty. Back in Gumbaldia it is revealed that Lolly cut the lift as part of Gumbald's plan to gain Finn and Jake's trust. Both kingdoms then prepare for war with Gumbald, Lolly, and Chicle (who has now turned back into Crunchy) teaming up with some of Finn and Jake's old enemies (The Squirrel, Ricardio, Bandit Princess, Samantha, Peace Master, Me-Mow, Pete Sassafras, Ash, Sir Slicer, Scorcher, Fern, and mistakenly Ice King and Gunter).

Gumbald makes his final appearance in the final episode "Come Along With Me". He sends one of his Gumbaldians to spy on Princess Bubblegum but gets caught. He then prepares for war with the Candy Kingdom but Finn makes both him and Bubblegum compromise, then knocks them out with a dream potion. Within the dream Gumbald and Bubblegum fight each other until they both have a vision of them switching places. After they wake up both Gumbald and Bubblegum have an epiphany and decide to declare peace. However, Aunt Lolly seeing through Gumbald's lies redeems herself and trips him which causes him to fall and break the tube of dumdum juice that he was going to use on Bubblegum right on himself. Thus Uncle Gumbald is transformed back into Punch Bowl, ending his reign of terror for good. 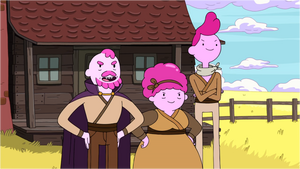 Gumbald with Chicle and Lolly. 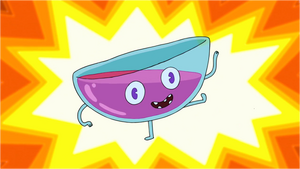 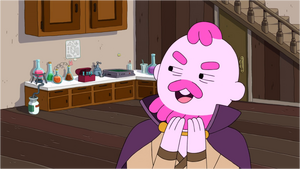 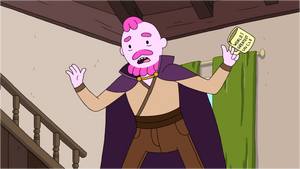 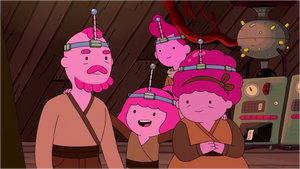 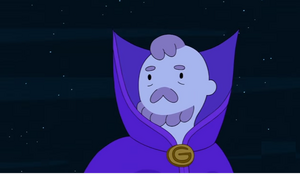 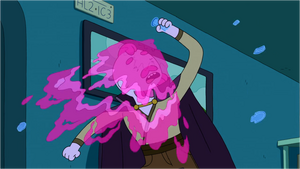 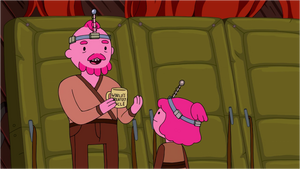 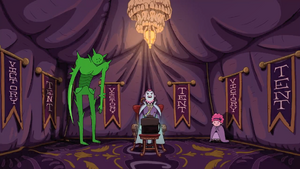 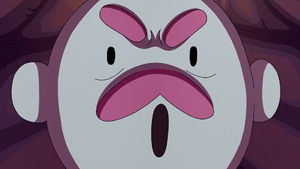 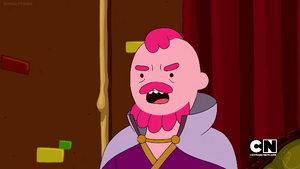 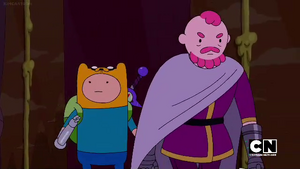 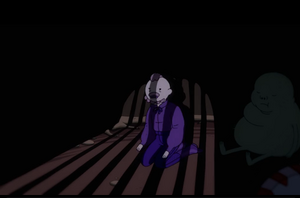 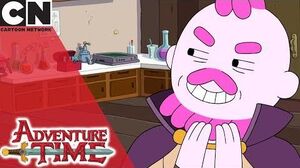 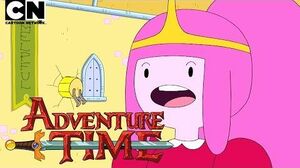 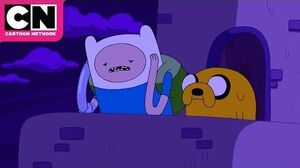