Serve and obey their vampire masters.

Zombies (屍生人ゾンビ Zonbi, lit. "Undead Person") are beings created by vampires who have donned Stone Masks. They serve as supporting antagonists in the early arcs of JoJo's Bizarre Adventure.

Zombies are created when Stone Mask Vampires inject their vampiric extracts into the body of the living or dead. Normally Stone Mask Vampires create Undead People while they are draining bloods from their victims. Contrary to other popular medias, vampires in JoJoverse do not automatically create undeads by sucking their bloods. For an instance, when Dio had his blood drained by a vampirized drunkard he did not automatically turn zombie. And women victims who had their blood drained by Dio in Stardust Crusaders arc just died and did not turn into zombies. Vampires' extracts have to be injected into victims' bodies to become zombies. Only trained Ripple users are able to reject this process.

When people turn into zombies, their injuries they had in life automatically heal. (Bruford and Tarkus had their severed heads reattached). But that is it: they cannot regenerate after that.

All zombies are mentally bound to their vampire creators and are loyal towards their creators. Their former personalities and humanities are lost, becoming a bloodthirsty predators who constantly crave for bloods and flesh of the living. Although zombies do consume flesh, their primary diet consist of blood just like their vampire masters. And like zombies in other popular medias, they possess ability to infect and convert other living beings into one of them. Also like zombies in popular medias they cease their activities permanently when their heads are destroyed. Like their vampire masters they perish when exposed to sunlight.

Stengthwise, unless zombies happen to be extremely strong in life or had their physical attributes altered in life humans who possess above average strength can take them on. (Jonathan Joestar killed a zombified police with a spear, and he was non-Ripple user at the time). However, with their inability to feel pain, inhuman aggression, extraordinary persistence and unlimited stamina makes them more than a match for normal humans. They keep on persisting until their head is obliterated.

Dio Brando was the only known Stone Mask vampire to create zombies: Aztec Chief who turned vampire slaughtered his own people but did not create any zombies. Vampire drunkard died while eating Dio's blood. Stone Mask vampires make their appearances in Battle Tendency but never created zombies.

Adams is a Zombie with a long sharp tongue created by Dio Brando who lurks around Windknight's Lot. Formerly a human and villager of Windknight, the Zombie meets the Joestar Group and after a brief conversation with Poco, tries to ambush the Group from behind. Jonathan however easily kills him.

Doobie is a minor villain from the first arc of JoJo's Bizarre Adventure, Phantom Blood.

Doobie is one of the many zombie underlings of Dio Brando. Dio calls Doobie to have fun with a girl he had been trying to seduce. As Doobie starts harassing her, an anvil falls on his head, which was dropped by Jonathan, who proceeds to fight Doobie. Doobie then removes the sack on his head, revealing the venomous snakes which reside on his skull and attacking JoJo with them. JoJo removes the venom from his body and grabs the snakes, charging them with Ripple, which makes the vipers turn on against Doobie and bite him, killing him in the process.

The four are some of the many zombie underlings of Dio Brando. They attack Jonathan's group after Dio kills Dire, attempting to use their combined Vascular Needle Attack (in which they extend their blood vessels from their bodies to attack) against Straights, who jumps and knocks a chandelier over them, then proceeding to dispose of them by using his Hamon on the chandelier, which melts the four zombies instantly.

These four differ from other zombies due to their alien-like appearance, instead of looking like regular ghouls.

She was a mother who resided in Windknight's Lot when it was infiltrated and occupied by Dio Brando. Imprisoned, surrounded by Dio and his undead minions, she desperately begs him to spare her baby. Dio agrees to her plea, promising her not to eat the baby. Instead he turns her into an undead by injecting his vampiric extract into her. No longer a human, she soon after devours her own very baby she tried to protect, while Dio cynically retorts that he did not laid a finger on the baby as he promised. It is unknown what happened to her after Jonathan Joestar's second triumph against Dio Brando, who fled with only his head intact. But she most likely among the 73 undeads who are exterminated (and police declaring them as missing).

It was meant to display the apparent pure evil nature of Dio Brando.

He was one of four policemen summoned by Jonathan Joestar to arrest Dio for his conspiracy to kill George Joestar, Jonathan's father. After Dio turned into a vampire he had his blood drained by Dio, died and revived as an undead. He attempted to suck the blood of Robert Edward O. Speedwagon, only to be killed by Jonathan Joestar, who severed his head with a spear.

A hybrid undead animal. It has body of a dog and a head of a human male. Upon seeing Poco's sister, it encouraged Dio to suck her virgin blood. Dio took offense to his rudeness and killed it.

A hybrid undead animal. It has a body of a bird and a head of a cat.

This undead was one of Dio Brando's zombie that survived even after Dio's centuries of underwater imprisonment after his duel with Jonathan Joestar. He managed to somehow obtain a high position in UK military and hide from others' suspicion: when it ate its victims it carefully devoured its victims down to the hairs, feigning injuries by riding on a wheelchair and almost never going outside. However, he raises suspicion of George Joestar II, who discovered his undead identity and tried to expose it, only to be counterattacked by his undead superior and be eaten. Furious at her husband's demise, Lisa Lisa avenges George II by killing the undead commander with her Ripple ability.

Unfortunately, Lisa Lisa was witnessed by British soldiers who know nothing about Ripple or Dio's undeads. Lisa Lisa was accused of murdering a war hero, condemned to treason and becomes a wanted felon. Only with Speedwagon Foundation's support she was granted a new identity and forced to live a separate life from her son and mother-in-law.

In Stone Ocean arc, the Stand named Limp Bizkit permits the creation of undead people-like creatures, manifesting as tangible spirits that climb out of their corporeal bodies and are thus rendered invisible. Sports Maxx, Limp Bizkit's Stand user, also becomes an 'undead' through the use of his powers and displays strength, speed and hunger similar to vampirically-made undead. This allowed Maxx to dismember his body without pain or injury while also giving him immense strength. After a vicious fight against Ermes, she defeats Sports Maxx. Maxx's body is pummeled to the point that his Stand is lost. Without Limp Bizkit to preserve his zombified state, Maxx crumbles into mush and ceases to exist.

Limp Bizkit does not have a physical appearance. Victims of its ability will appear invisible, though they can be seen when coated in a material. 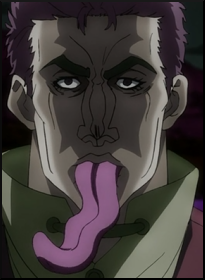 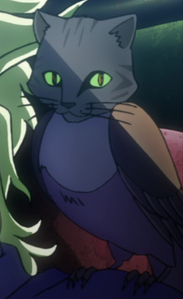 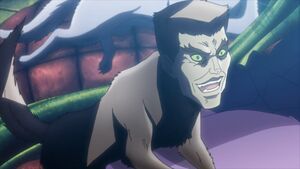 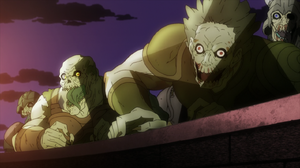