Underbite is a Gorgonops-like Chompazoid and one member of the Steeljaw's Pack in Transformers: Robots in Disguise.

He was voiced by Liam O'Brien.

Underbite was apparently arrested for destroying Nuon City, and was incarcerated aboard the prison ship Alchemor. After it crashed on Earth, he was freed from his stasis pod by the impact, and set off in search of food. He eventually encountered Sideswipe, and after a brief chase he tangled with the rest of Bumblebee's team.

After spying a nearby scrapyard through the trees, he headed off to devour that instead. Despite tussling with Grimlock, Underbite began chowing down on the contents of the scrapyard, only to spot a bigger prize—nearby Crown City. Unfortunately, the organic matter he encountered along the way was unsuitable for his consumption, and he slowly weakened. Using metallic bait, the Autobots managed to lure him to the edge of a quarry. Underbite managed to outfight them and prepared to munch Denny Clay's pickup truck. Fortunately, a ghostly Optimus Prime intervened and helped defeat the Decepticon. The Autobots later placed the incapacitated Underbite back in his stasis pod.

Underbite's stasis pod was stolen by Grimlock while the Dinobot was under the control of Minitron. Although the other Autobots were able to free Grimlock from the cyber-tick's influence, Steeljaw, who had masterminded the heist in the first place, made off with the stasis pod and reactivated Underbite.

Now a member of Steeljaw's pack, Underbite was hanging out at the Decepticon hideout with Fracture when Steeljaw arrived with newcomer Clampdown. After Clampdown fled due to Thunderhoof threatening him, the other Decepticons tracked him to a garbage tip where they encountered the Autobots. Underbite fought with Grimlock, however this time the Autobot managed to take him out- first by force-feeding him plastic and then cannonballing him. Steeljaw later freed the gang, and they escaped back to their hideout.

Underbite took part in an attempt to free the prisoners in the Autobots' scrapyard. After Steeljaw trapped the Autobots outside using subsonics, Underbite was given the task of guarding the prisoners, only for them to escape while he was eying up some nearby scrap as potential food. Once the Autobots regained access to the scrapyard, Underbite was swiftly taken down by Strongarm and later fled back to base with the rest of Steeljaw's gang.

Out collecting parts for the device Steeljaw's mysterious friend wanted them to build, Underbite and Thunderhoof happened across Sideswipe and Strongarm, promptly capturing the pair with Fracture's help. When Windblade flew over the steel mill hideout, Underbite was able to bring her down with a precisely thrown beam, adding her to their collection of hostages. The Decepticons were soon busy at work constructing the gateway Steeljaw's ally required, however when Bumbblebee and Drift arrived, Steeljaw assigned Underbite and Thunderhoof to intercept them. Underbite swiftly dealt with Drift, allowing Megatronus to arrive on Earth. He and the other Decepticons were rendered unconscious when Optimus Prime tried to interfere with the arrival. They came around in time to prevent the Autobots getting hold of Megatronus's staff, however when Megatronus turned on Steeljaw, Underbite, Thunderhoof and Clampdown attempted to flee. They ran straight into Team Bee, and Underbite was taken out when Bumblebee cannonballed into him. The defeated Decepticons were later stored away in stasis pods. Underbite's stasis pod was later taken back to Cybertron by Optimus Prime, Windblade and Ratchet.

When the High Council led by Cyclonus released Steeljaw from prison to keep Bumblebee and his team occupied while they made plans to summon Megatron, Underbite was also released with the promise of a full pardon should the Pack succeed in terminating the Bee Team. They returned to Earth where they mounted an assault on Denny's scrapyard that forced the Autobots out of their home. Switching tack, they headed to the Crown City Dam where they sabotaged it to draw the Autobots out, resulting in a fight which ended with the Decepticons falling into the river. Underbite and the other members of the Pack split up to search for members of the Bee Team.

Gaining new orders from Soundwave, the Pack were sent to a waste disposal site to dig up spent nuclear fuel, though Underbite played guard dog while the others excavated. When the Autobots inevitably turned up, Underbite battled an oddly-reluctant Grimlock until Clampdown hit paydirt and the Decepticons made off with their prize. The Pack stopped off in a warehouse so Quillfire could dispute the nuclear fuel towing arrangements, resulting in the Autobots catching up with them. During the fight which ensued, Underbite was stomping the Autobots when Sideswipe threw Grimlock at him. The Decepticons were again forced to retreat.

Steeljaw next set the Pack's sights on breaking into a nuclear plant, having Underbite and the others scan new color schemes to use as disguises. They managed to gain entry into the plant and started looting fuel rods until the Autobots again crashed their operation. Underbite did his best to keep Bumblebee busy, but was knocked out by his opponent. After Steeljaw set the plant to meltdown, Bumblebee and Strongarm had to carry Underbite's unconscious body clear. He and the other captured Pack members were temporarily housed in makeshift cells in the Autobot's cave.

The Pack members were returned to the scrapyard when the Autobots took it back, however Underbite promptly escaped while Grimlock was trying to secure him in a stasis pod. During the ensuing battle, Underbite ate the field generator out of the GroundBridge, which resulted in him randomly teleporting to different locations as the Bee Team struggled to keep up with him. Fixit was eventually able to GroundBridge him back to the scrapyard and nullify the field generator, after which Denny and Russell tricked him back into a stasis pod. With the other imprisoned Decepticons, Underbite was returned to Cybertron when the Bee Team freed it from the Decepticon High Council. 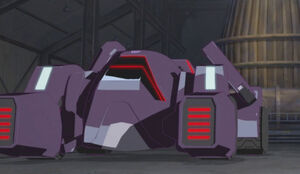 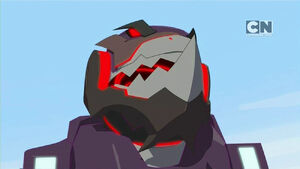 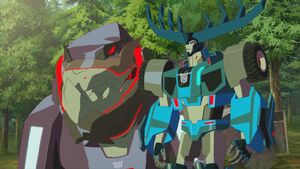 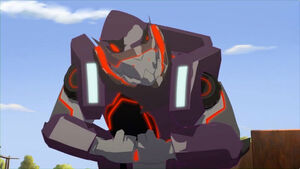 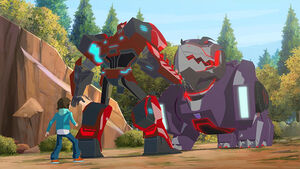 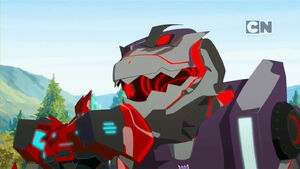 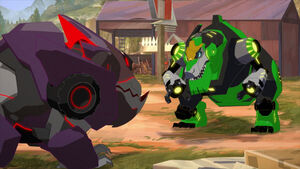 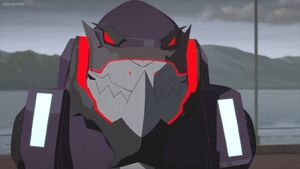 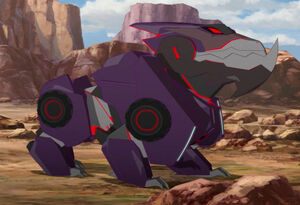 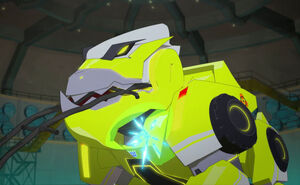 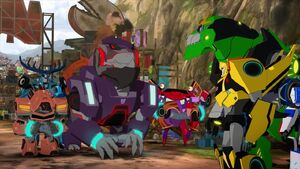 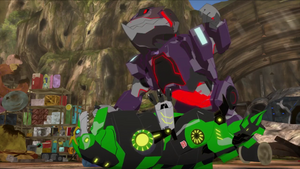 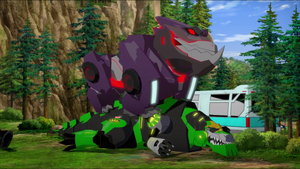 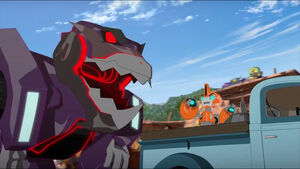 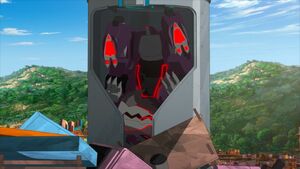 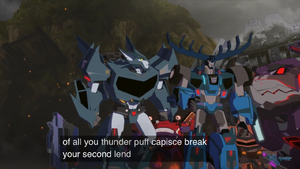 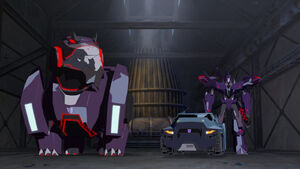 Retrieved from "https://villains.fandom.com/wiki/Underbite?oldid=4167156"
Community content is available under CC-BY-SA unless otherwise noted.