Conquer and plunge the surface world into darkness.

The Underground Empire Tube (地底帝国チューブ) are a vast underground civilization seeking to conquer the surface world and the main antagonists of Hikari Sentai Maskman.

They are a coalition of various underground tribes united under a single spanning empire. They were originally ruled by the Igam Family until Emperor Zeba took power, desiring to rule both the underground and the surface.

The Igam family were later overthrown by a mysterious figure named Zeba, who seized control of the underground and became the new ruler of the Tube Empire. As Emperor, Zeba turned Tube into an oppressive and warmongering kingdom and enslaving its human population.

Learning that the Igam family's two surviving children, Igam and Iyal, would be his downfall, Zeba kept the two apart from each other. Desiring to add the surface world to his dominion, Zeba sent Iyal to the surface as a spy. However, Iyal fell in love with Takeru and decided to warn him about the Tube invasion, causing Zeba to seal her in ice as punishment.

After a buildup of its military, Tube began its invasion of the surface world. While their Ungler Soldiers wreaked havoc on the ground, the Empire's Unglermon Fighters bombed and destroyed buildings. However, the Tube's invasion was met by a team of five who had been trained in anticipation for their attack - the Hikari Sentai Maskman.

Eventually, Zeba is exposed as being the descendant of Lethal Doggler named Lethal Doggler II. After his plan to spread darkess across the world was foiled, Lethal Doggler II was slain by the Maskman, allowing Iyal to reclaim the throne of Tube and reform the kingdom.

The Underground Castle is the headquarters of Tube and the location where its rulers reside. It is here where the Emperor meets with his inner circle to discuss the invasion of the surface.

It is not immobile and can be raised by manually operating a special mechanism built within it. The castle also holds the power to distribute "Evil Particles" which are capable of terraforming areas to be more like the cold environment of Tube. It is the goal of Emperor Zeba to levitate the Underground Castle to the surface, so it can spread Evil Particles across the Earth and turn its outside into a dominion of the Tube.

Besides its function as a weapon of war, the Underground Castle also has a number of chambers that serve other purposes. Among these are a library which holds documentation of the entire history of the Tube civilization. It also has a confinement area called the "frozen crypt" where those who commit treason against Tube and other crimes deemed heinous are held.

Unglermon Fighters comprise the aerial force of Tube's military. They typically fly in formations of three and attack by firing lightning bolt-like blasts. Their core is led by Prince Igam.

When a number of Unglermon Fighters are gathered, they can merge to form a massive war machine known as the Unglermon Snake.

During the Tube's initial attack, Unglermon Fighters were used to carry out bombing runs on cities and to destroy buildings to stoke fear and panic.

The underground is home to a variety of tribes and clans, united under the banner of the Tube Empire.

The Igam Family were the original ruling family of Tube, prior to Emperor Zeba's uprising.

The Fu Clan are a tribe of ninjas who serve the Igam Family as bodyguards. While some would serve Zeba under his reign, others, loyal to the original Igam dynasty, would rebel and try to reestablish the Igam as rulers.

The Buyon Clan are a tribe of ninjas who serve as warriors for Tube.

The Baluga Clan are a tribe of warriors within the underground, many of whom serve in Tube's military. 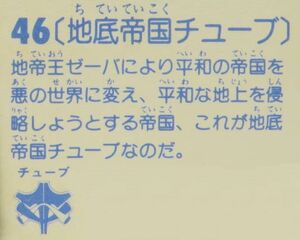 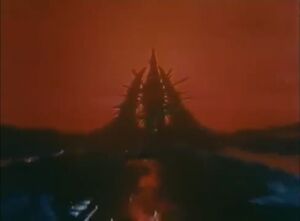 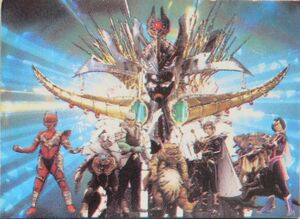 The main members of Tube.