Turning people into his mind-slaves

To turn Earth into his plant-filled paradise.

Undergrowth is the main antagonist of the Danny Phantom episode "Urban Jungle".

He is a giant weed plant monster who wants to enslave humanity as revenge for their endless destruction of mother nature.

He was voiced by Mark Hamill, who also played The Joker, Tony Zucco, Ferris Boyle, and Solomon Grundy in the DC Animated Universe, the Skeleton King in Super Robot Monkey Team Hyper Force Go!, Maximus in the Fantastic Four animated series, the Hobgoblin in Spider-Man: The Animated Series, Kavaxas in Tales of the Teenage Mutant Ninja Turtles, Stickybeard in Codename: Kids Next Door, Flint in Disney's Buzz Lightyear of Star Command, Niju in Balto II: Wolf Quest by Universal Pictures, John Curtis in Criminal Minds, Fire Lord Ozai in Avatar: The Last Airbender, Trickster in The Flash, Dictatious Maximus Galadrigal in Trollhunters, ShiverJack in Jake and the Never Land Pirates, Agent Goodman in Disney's Recess: School's Out, Adrian Ripburger in Full Throttle, Cock Knocker in Jay and Silent Bob Strike Back, Stickybeard in Code Name: Kids Next Door, Popsicles in the 2016 reiteration of The Powerpuff Girls, Alvin the Treacherous in the How to Train Your Dragon series, and Chucky in the 2019 remake of Child's Play.

After Vlad Plasmius became Mayor of Amity Park, he started a "beautification campaign" that involved cutting down trees and plants for new buildings, Angered that the people of Amity Park were destroying his children for urbanization, he attacked and used mind vines to turn everyone into his slaves including Danny's Family, Tucker and Sam. With Sam turned into his "daughter", he had her attack Danny, however, with his currently uncontrolled new ice power, manages to escape into the Ghost Zone searching for Frostbite to help him . Sometime later, Danny returned, having finally mastered his ice power thanks to Frostbite. Using it, he managed to destroy Undergrowth's new plant world by freezing his roots causing the giant plant to shrink thus defeating Undergrowth as well a freeing everyone under his control . Undergrowth was reduced to a shrub but was planning to take over again only to be destroyed by Tucker's lawn mower. He was perhaps one of the most powerful ghosts in the series ties with Vortex but surpassed by Dark Danny.

He makes on last cameo appearance in the series finale Phantom Planet in which Danny attempts to fight him again but is easily defeated by him and rips his clothes off, moments later he is defeated by the Master's Blasters fighting team. Later, he along with all the other ghosts in the series with the exceptions of Vlad Plasmius (who was in space regretting his actions) and Dark Danny (who refused to help or was still trapped in the Fenton Thermos) appear to help Danny turn the earth intangible so the Disasteroid can pass through it harmlessly, saving the earth and the Ghost Zone as well. 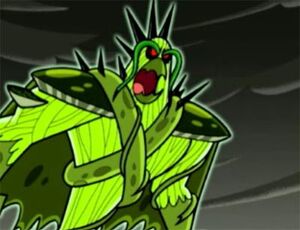