The Little Mermaid II: Return to the Sea

Overthrow King Triton and return to normal size (both Failed).

Undertow is the secondary antagonist of Disney's 2000 direct-to-video animated sequel film The Little Mermaid II: Return to the Sea, the sequel to Disney's 28th full-length animated feature film The Little Mermaid (which is based on the 1837 Danish fairytale of the same name by the late Hans Christian Andersen). He is Morgana's pet Megalodon-sized great white/tiger shark hybrid and right-hand man.

He was voiced by Clancy Brown, who also played Viking Lofgren in the 1983 film Bad Boys, Byron Hadley in The Shawshank Redemption, The Kurgan in Highlander, Lex Luthor in the Animated DC Universe, Doctor Neo Cortex in the Crash Bandicoot video game series, General McGuffin in Wander Over Yonder, Harry Bordon in Cast a Deadly Spell, Parallax in Green Lantern, and Mr. Krabs in Nickelodeon's SpongeBob SquarePants.

Undertow is summoned by Morgana to eat the baby princess Melody, but Melody's grandfather King Triton turns him into a small piranha-like fish, much to his chagrin.

For the next 12 years, Undertow soon becomes obsessed with becoming a full-sized shark again, but Morgana's magic does not work, and he remains small throughout most of the film. He helps to deceive the older Melody into joining Morgana and getting Triton's trident.

When Morgana finally gets the trident, she turns Undertow back into his original size at an opportune time, much to his complete delight. He is sent after the penguin/walrus duo, Tip, and Dash when they go to rescue Melody, and he attempts to eat them. Tip and Dash, however, manage to hold him off and steer him into an ice wall that served as Melody's prison.

Undertow shattered through the ice and smashed against the rock wall behind it, breaking all of his (very un-shark-like) teeth in the process. It's completely unknown what happened to Undertow following this, but it could be possible that he escaped before Morgana's lair sank down, or if that wasn't the case, he was presumably crushed or dragged with the lair to the depths of the ocean to his death.

Undertow as a shark. 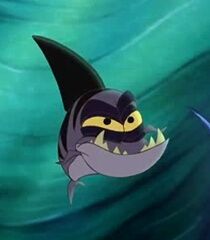 Undertow, after being shrunk.
Add a photo to this gallery

Retrieved from "https://villains.fandom.com/wiki/Undertow?oldid=4293239"
Community content is available under CC-BY-SA unless otherwise noted.