Conquer the surface for Tube.

Minions
The Ungler Soldiers are the main combatant force of Underground Empire Tube and antagonists in Hikari Sentai Maskman. They comprise the main ground forces of the Empire, and also pilot its Unglermon Fighters.

As Tube began their invasion of the surface, the Ungler Soldiers attacked numerous points throughout Japan, including a subway. A force of Ungler Soldiers also accompanied the Igua Doggler to its confrontation with the Maskmen.

Ungler Soldiers later extracted Princess Ial from her imprisonment so she could be properly punished for her betrayal of Tube.

The primary weapon of the Ungler Soldier is a lance, which can also double as a firearm for long-ranged combat. The lance also has a chain function for apprehending targets from a small distance. 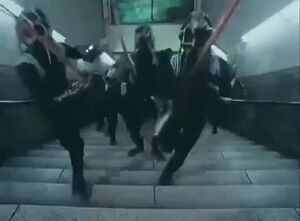