Spider of Night
The Dark Spider

Destroy the Two Trees and consume their light.

Plunge the World into darkness alongside Morgoth (both succeeded).
Take the Silmarils from Morgoth for herself (failed).

Ungoliant is a major antagonist in the Middle-earth legendarium, appearing in The Silmarillion. She was one of the most terrifying evil spirits in Arda, taking the form of a Great Spider, and she may as well be the personification of consumption, greed and oblivion itself.

When Melkor turned his followers into demons, such as Balrogs, Ungoliant took the form of a hideous giant spider. Enraged, she disowned her master and fled to the forsaken realm of Arda, to take refuge from the Valar and the hunters of Oromë. There, she hid in a ravine beneath a fortress of black webs and spent years of lust and hunger.

Union of the Dark

Ungoliant was once a servant of Melkor, who later became Morgoth. But she abandoned him and became her own mistress. She did, however, rejoin the dark side when Morgoth returned to her lair with a proposition.

Morgoth asked her to come with him to Valinor, to destroy its two most important trees (thus plunging Valinor into chaos). At first, Ungoliant was fearful, but when Morgoth said, “Do as I bid; and if thy hunger still when all is done, then I will give thee whatsoever thy lust may demand,” she agreed to help him.

Ungoliant wove a shadow around herself and Morgoth, that enabled them to slip into Valinor unnoticed. When they reached the two Trees, Morgoth stabbed them each of them to the core. However, Ungoliant, who had spent years without sustenance, immediately sucked up all the magical sap. She then grew to twice her normal size, but she was still thirsty. She went to a sacred well, and drank it dry, growing so large she even frightened Morgoth. But Ungoliant suffered from this mistake. From that point on, she had a hunger that could not be satisfied.

Morgoth and Ungoliant fled back to Middle-earth, where they escaped from the Valar and the Maiar. Morgoth, who had seen enough of Ungoliant, attempted to slip away. But Ungoliant held him back and demanded that he keep his promise. Grudgingly, Morgoth gave her the gems of Formenos, and she grew larger than ever. She then demanded the Silmarils, but Morgoth refused. Ungoliant attacked Morgoth and began wrapping him in her webbing.

Morgoth's Balrogs attacked her and drove her into the south of Middle-earth, where she met many man-sized spiders. She mated with them and gave birth to a more advanced race of immortal giant spiders.

Shelob was the greatest of her daughters, whom of which encountered Frodo and Sam on their journey to destroy the One Ring. Shelob was potentially the last of her kind, though it is unknown if she lived or succumbed to the stab she received from Sam. 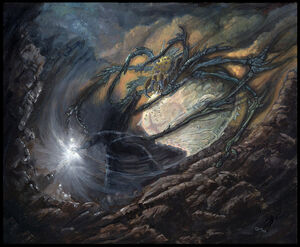 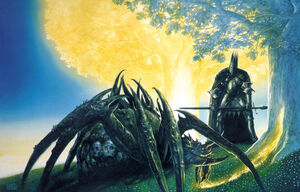