Super Criminal
Milos Masaryk, also known as the Unicorn, is a supervillain in the Marvel comics. Yegor Balinov, Aaidan Blomfield, and an unnamed criminal also used the Unicorn persona.

Milos Masaryk was a Soviet Intelligence agent assigned to security duty at the private laboratory of inventor Anton Vanko. Vanko was engaged in the development of advanced technological weaponry and armament. His first completed project was a full body suit of armor which he himself would later wear as the Soviet operative code-named the Crimson Dynamo. His second finished project was a helmet and harness into which offensive radiation beam weaponry called a "power horn" was integrated. Vanko offered this invention to Masaryk, and with government approval, began to instruct the Soviet agent on its use.

Some time after professor Vanko defected to America, the Soviet government dispatched Masaryk to avenge the disgrace caused by the inventor. Masaryk was given a special, heavily insulated costume and code-named the Unicorn because of the head-mounted discharge cone of the weapons system he wore. The Unicorn confronted Iron Man, the person instrumental in getting Vanko to defect, and coerced him into accompanying him back to the Soviet Union where the secrets of Iron Man's armor could be unlocked. Iron Man escaped, however, and permitted the enemy agent to go free.

He was among the many costumed menaces assembled by Doctor Doom to disrupt the wedding of Reed Richards and Susan Storm.

The Unicorn then entered a short-lived alliance with Count Nefaria in hopes of acquiring some funds for his subversive activities. Their scheme, however, was thwarted by the X-Men. Returning to his native Czechoslovakia, Masaryk voluntarily underwent a special treatment by the experimental "hyper-activator" device designed by the government to augment physical strength. Masaryk's several months delay in reporting back to his superiors had raised suspicions as to his loyalty, and so he was forced to undergo weeks of brainwashing before serving as a test subject for the hyper-activator device. The treatments not only endowed him with superhuman strength, but it also undid the effects of his brainwashing. Thus, as soon as the treatments were finished, Masaryk turned on the scientists who had empowered him and destroyed their machine so they could not create any more such as him. Donning a redesigned version of his power horn weaponry he fled, hoping to find a means to cure himself of an unfortunate side-effect of the treatment, accelerated cellular deterioration.

Returning to America, the Unicorn first tried to coerce the congress of the United States into giving him funds to finance the investigation of the causes of his advanced living. Iron Man managed to thwart this plan, but the Unicorn once again eluded capture. The Unicorn then sought the help of the renegade Soviet scientist, the Red Ghost. The Red Ghost attempted to use the Unicorn as a mere henchman, but the Unicorn ultimately managed to overpower him. When the Ghost proved incapable of curing his ailment, the Unicorn left him and sought the Mandarin. The Mandarin turned the Unicorn into his "body-slave" and used him in one of his many attacks on Iron Man. Through a mind transference device he had devised, the Mandarin was even trapped in the Unicorn's body for a short time.

The Unicorn then contacted the Titanium Man, who promised to find a cure for him if he defeated Iron Man. The disease having begun to affect his brain, the Unicorn readily agreed. For the first time Iron Man managed to apprehend his longtime foe. Iron Man placed the Unicorn in a cryogenic cylinder and gave him a chemical bath designed to arrest his cellular deterioration. By the time the Unicorn was accidentally freed months later, the treatment was apparently successful. However, the disease had damaged the Unicorn's mind enough so that he was now insane. After yet another battle with Iron Man, the Unicorn (deprived of his rocket belt) escaped. He was last seen heading out to sea, hoping to rendezvous with the Titanium Man, who, unknown to him, had been deported to the Soviet Union months before.

The Unicorn eventually popped up again in a Siberian prison. Inside the prison he was used as a combatant in illegal fights run by the inmates. In a fight with "Bucky" Barnes, he was tricked into blowing up a large part of the prison by igniting the sewer system with his eye-beam. Bucky escaped, apparently leaving Unicorn behind.

Unicorn later returned to the United States and was one of the many villains of Iron Man gathered by Spymaster in his plan to assault the Stark Tower after the Avengers left Earth to battle the Builders.

Once in the Stark Tower, Spymaster used teleporter discs to teleport some Iron Man armors to his buyers, but he escaped and left Unicorn and the rest of his accomplices to be discovered by the heroes which were using the tower as a base. They managed to defeat the heroes, and they were offered to be taken to Spymaster by Titanium Man. When they arrived to a spaceship where Spymaster was, they were ambushed by him and Titanium Man, who revealed himself as Captain Atlas of the Kree, the buyer.

They managed to escape custody and started fighting Spymaster, Titanium Man and the army of Iron Men, controlled by the first. The actual Iron Man arrived to the spaceship, after having tracked down the armors, and helped Unicorn and his allies defeat the enemies. After winning Blizzard froze himself along with Iron Man in order to let his friends escape.

Unicorn appears in the Marvel Superheroes cartoon episode "Dr. Doom's Day/The Doomed Allegiance/Tug of Death". He was seen for a brief moment attacking the city along with other supervillains. 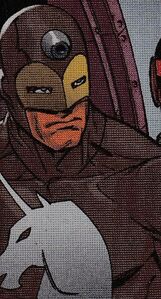 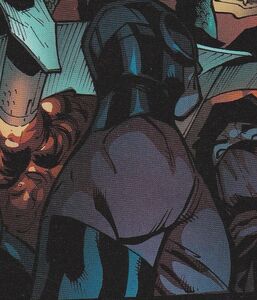 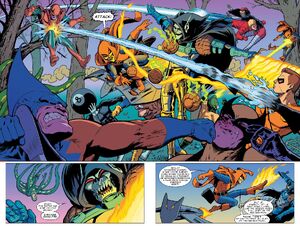