Unicron is a multiversal singularity of Transformers fiction and one of the series' powerful villains.

Unicron is the eternal arch-enemy of his twin brother Primus. He is known as the Dark God, the Chaos Bringer, the Planet Eater, and he is dedicated to consuming the multiverse. His goal is to bring an end to the annoying creation boasting independence around him, and find peace by becoming the living center of a swirling, infinite torrent of nothingness at the end of all things. To undertake this seemingly overwhelming task, Unicron is able to travel across realities at will, a meandering plague upon existence itself. Integrated into his systems are incomprehensible quantum computers which calculate probabilities forward and backwards in time, in perpetuity, giving his processors an ever changing, evolving map of the multiverse.

The only thing that he fears is Primus' essence, contained inside the Matrix.

Frequently, Unicron will make deals with lesser beings, giving them vast new powers in exchange for their servitude. These minions are sometimes stripped entirely of their free will, but others follow him willingly. Service to Unicron, however, is a double edged sword, for it causes insanity and loss of self. And in the end, no matter their intent, Unicron's plans ultimately call for their consumption as well.

Despite many similarities between him and the Marvel Villain Galactus, he is not a parody of him. At least not intentionally.

Unicron is the main villain of The Transformers: The Movie. He is known and feared by robotic Transformers (and all transformers other than he are tiny-sized compared to Unicron). He at the beginning of the film devours the planet Lithone. Only one inhabitant of Lithone had survived (Kranix). Then, he sent a mortally-wounded Megatron in a task to destroy the Matrix of Leadership and Ultra Magnus, the successor leader of Optimus Prime (who died in a battle with Megatron). Unicron turned Megatron into Galvatron. When Unicron proceeded on devouring Cybetron's moons, Galvatron was quickly furious at Unicron for this. When Galvatron wouldn't remain loyal, Unicron tortured him as a slave to do whatever he orders him to do. Galvatron even tries to ally with the Autobots (his usual enemies) in order to save Cybertron from being destroyed by Unicron. Galvatron was unable to withstand Unicron's torture, and provoked Galvatron into attacking Hot Rod, a young Autobot and the main character of the film. Hot Rod opened the Matrix of Leadership inside Unicron after throwing Galvatron out of Unicron's body, and Unicron perished, with his head separated from his body.

"Yes, descendant of Primus, for Unicron may be one, but we all are Unicron!!" - the several life forms resembling Unicron who have the same soul as the real Unicron

Unicron was first mentioned by name in The Hub TV show Transformers: Prime, who is called "The Destroyer" and "The Chaos Bringer". Megatron obtains Dark Energon from Unicron which helped Megatron survive a space bridge explosion.

Unicron made his first physical appearance where Megatron was guided to an Earth volcano that is erupting Dark Energon. Megatron wanted Unicron to accept him as his humble servant, but Unicron refused and decided to kill off Optimus Prime himself instead of waiting for Megatron to do so. It is also stated that Unicron is responsible for Earth's creation, thus also creating Earth's biological life forms. Humans all over the world were suffering natural disasters such as floods, tornadoes, and hurricanes, with no where on the planet being safe. There were duplicated clones of Unicron arising to kill Optimus Prime, from nearly slighty taller to much bigger than the Transformers. The real Unicron is actually in the core of the Earth with bat-like robots guarding the real Unicron's body. Megatron could not resist being possessed/ brainwashed by Unicron into killing Optimus, as the Autobots and Megatron teamed up against Unicron. Optimus uses the Matrix of Leadership to destroy Unicron, since the Matrix contains the essence of Unicron's twin brother, Primus. After Unicron was destroyed, Optimus's memories after being known as Orion Pax were erased.

Awakened by the restoration of Cybertron, Unicron cast around for a new vessel for his anti-spark, and found Megatron's body at the bottom of the ocean. Reconstructing and reviving Megatron, Unicron took possession of his body and flew to Cybertron with the aim of destroying Primus once and for all. He arrived at Megatron's old fortress of Darkmount, where he fought four Autobots. Dissatisfied by his new body's performance in battle, he tracked down Predaking, whom Megatron claimed was a loyal warrior. After a brief fight, Unicron prevailed and learned of the existence of a burial ground of Predacon remains. He used his Dark Energon to revive the Predacons as an army of Terrorcons, and led them across the Hydrax Plateau to the Well of All Sparks. While the Terrorcons poured into the Well, Unicron felt the return of the AllSpark, which Optimus Prime had just brought back to the planet. Unicron easily bested Prime in battle, and obtained the vessel, only to find it empty. The vessel instead drew Unicron's anti-spark into itself, sealing the dark god inside and freeing Megatron from his will. 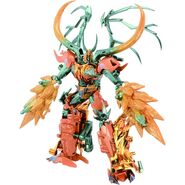 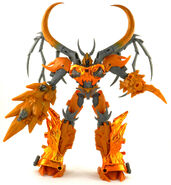 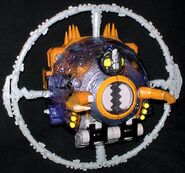 Add a photo to this gallery
Retrieved from "https://villains.fandom.com/wiki/Unicron?oldid=637768"
Community content is available under CC-BY-SA unless otherwise noted.