Causing chaos around the universe.

Awaken from his slumber, wipe out humanity and destroy Earth in the process.

Kill both the Autobots and Decepticons and all Cybertronians.
Kill his brother, Primus.
Corrupt and destroy Cybertron, ensuring that it remains as nothing but an uninhabitable, "poisoned world" forever.
Rule the universe and have chaos reign supreme.

Known as the Chaos Bringer and Planet Eater, Unicron was one of the two oldest Transformers in existence, alongside Primus, who he sought to destroy, alongside Earth, Cybertron and spread chaos throughout the entire universe.

He was voiced by John Noble, who also played Scarecrow in Batman: Arkham Knight, Mallus in DC's Legends of Tomorrow, Walternate in Fringe, Brainiac in Superman: Unbound and Henry Parrish in Sleepy Hollow.

As the universe began to form, the only living things (at least in their part of space) were Primus and Unicron on the uninhabited planet Cybertron. The two dueled for the fate of the universe with neither getting an advantage for long. According to Optimus the tide was turned more times than it could be counted. To turn the tide firmly in his favor Primus created the Thirteen to fight with him. With these additional warriors, Unicron was defeated and cast out into deep space.

As he drifted and in slumber, space debris began gathering around him due to his gravity field. Eventually he was caught in the third orbit of a sun and became the very core of planet Earth in the Milky Way galaxy. Though Unicron's time adrift in space he bled Dark Energon which itself went adrift. The Covenant of Primus unveils a prophecy that foretold Unicron's awakening on Earth, though the details failed to mention that it was actually referring to Unicron and Earth. On Cybertron, stories were told of Unicron's defeat and he became a feared figure. But over time, as society marched forward, the Cybertronian people dismissed the Chaos Bringer as nothing more than a legend.

At some point, the Cybertronians found some Dark Energon and experimented with it in a space station commanded by Starscream. Eventually when the Great War came about Megatron used this very substance to poison Cybertron's core which lead to the planet's shutdown and the Great Exodus.

During the war on Earth, Unicron was mentioned when Dark Energon was in play and was often referred to as the "Blood of Unicron." Unicron's Dark Energon was used to create an Terrorcon army of fallen Autobots and Decepticons to invade Earth, was later used to revive Megatron's damaged body and create a Terrorcon Skyquake.

When the time of the planetary alignment was coming, Megatron saw an image of Unicron's fate which guided Megatron to an Earth volcano where he battled Optimus Prime until the volcano was erupting Dark Energon. A series of natural disasters soon followed as Unicron was emerging from slumber. Megatron took advantage and took the Dark Energon from the volcano and filled their warship's cargo hold with it. Later, Megatron flew to the volcano where he met Unicron through the volcano's gas. Megatron wanted Unicron to accept him as his humble servant, trying to obtain more power, but Unicron refused his offer. Unicron then sensed the presence of the Matrix of Leadership inside Optimus Prime and decided to kill off Prime himself instead of waiting for Megatron to do so, since he felt that Megatron would of destroyed Optimus when he had the chance. Back at Autobot base, Optimus was at an area covered in epicenter. Ratchet, who was monitoring Earth signals, discovered that Unicron is responsible for Earth's creation, thus also creating Earth's biological life forms aka the human race.

Later when Optimus was investigating the Earthquake sightings, Ratchet informed him that he detected that Unicron's spark was rapidly active. Unicron managed to manifest himself into a wall of the epicenter and asked Optimus if he knew him. Surprised by his appearance, Optimus recalled him and Unicron engaged Optimus with multiple copies of himself. Though Optimus tried to appeal to Unicron for the safety of human kind, Unicron dismissed them as parasites and vowed to destroy them too. Optimus then singled handly engaged many copies of Unicron but is soon overpowered. Fortunately, Bulkhead, Bumblebee and Arcee arrived to help him get to safety. However Unicron returned instantly, this time with a 200 feet copy of himself which easily overpowers the Autobots and almost kills Optimus by crushing him with his giant foot, but was destroyed by Megatron. Soon after Unicron revived himself and created two more giants of himself which Megatron engaged until leaving through a portal.

As the natural disasters and the human death toll rose, Optimus, Bulkhead, Bumblebee, Arcee and Megatron teamed up and journeyed to Earth's core to put the giant to sleep, as destroying him would destroy Earth too. However, on the way Unicron attacked the Cybertronians with his antibodies until eventually trying to use Megatron to kill them.

However, Optimus and Megatron made it into his spark chamber. Eventually, Unicron possessed Megatron and tried to kill Optimus, but the Prime used the Matrix of Leadership to put Unicron back to rest, thus seizing the natural disasters that was happening around Earth. However, the price that Optimus took was losing his own memories and reverting back to his original self, Orion Pax.

Primus' awakening sent out an echo throughout space. Unicron heard this and woke up. He desired to get to Cybertron and destroy Primus. However, his physical body was inert and only his energy form survived. He needed a new body, seeing Megatron's body, he revived the Decepticon leader and told him of his intentions. He also revealed that Megatron was unable to join the AllSpark because Dark Energon runs through his veins. Unicron then used the Dark Energon to restore him back to life and take over his body, reformatting Megatron into a fusion of himself and Unicron (often referred to as Galvatron by most viewers) in the process. He flew to Cybertron where he informed Megatron that he would not rule Cybertron, but destroy it. He arrived at Darkmount and faced off against Smokescreen, Bulkhead, Arcee and Bumbblebee. He used his godly powers to attack them. However, the Autobots' small size and speed allowed them to escape through a Ground Bridge back to base. Unicron however decided that his new form was weak and he needed a new instrument of destruction. He then saw a fire beacon and went to investigate. The beacon originated from Pedaking who Megatron claimed was a loyal warrior. Unicron soon discovered Predaking loathed Megatron with a passion. Megatron hoped Predaking could damage his body enough to drive Unicron out. Unicron punished Megatron and easily defeated Preaking while looking into his mind and finding the resting sight of many hundreds of deceased Predacon bones.

Unicron then flew to the Predacon cemetery where he silenced Starscream and easily defeated Darksteel and Skylynx. He gave life to the undead Predacons as his own army of Terrocons and rode one to the Well. Unicron first used his Terrocon legion to trample Shockwave and marched them towards the Well, though Shockwave survived the assault and convinced Predaking, Darksteel and Skylynx to join forces with the Autobots to stop Unicron. As he gets close to the well, Unicron orders his Terrocons legion to swarm into the well. While the Terrocons flew to the core, Unicron faced off against Optimus, who brought the Allspark and intends to free Megatron from Unicron's control. However, Unicron knocked Optimus back and was about to finish him, Bumblebee used the Polarity Gaundlet to hold him back. Eventually, he broke free and flew after the Prime. Unicron seized the AllSpark's vessel, but realizes too late that it was a trap set by Optimus Prime. The vessel sucked out Unicron's energy form from Megatron's body and trapped him in the AllSpark vessel, locking him in the vessel seemingly for good and severing the link, allowing Megatron to regain control of his body. This also allows the Terrocons to dissipate into dust before they could reach the core, saving all of Cybertron. Optimus says it was necessary to dump the container's contents into the Matrix of Leadership to trap Unicron and protect the AllSpark. As a result of Unicron's constant torturing, Megatron had lost his passion for war mongering and abandoned the Decepticon cause for good, even several other Decepticons (such as Shockwave, Knock Out, the Predacons and several Vehicons) agreed to put aside their differences with the Autobots to ensure Cybertron's survival.

Following Megatron's self-exile, Optimus sacrifices himself and the Matrix of Leadership into Cybertron's core to ensure new life in Cybetron and secure Unicron's defeat for good.

Though Unicron was still imprisoned by the events of Robots in Disguise, the traces of his anti-spark that left behind in Earth's core later revealed still remains, and nearly used by Megatronus Prime to destroy both Earth and Cybertron in revenge for his exile. 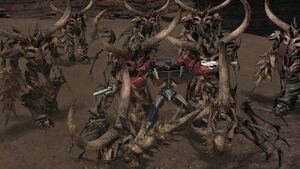 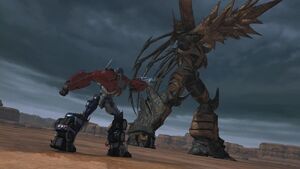 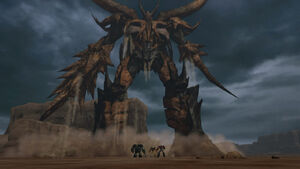 Unicron compared with the other Transformers. 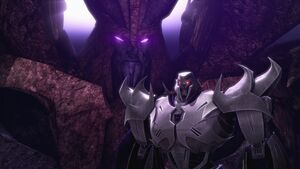 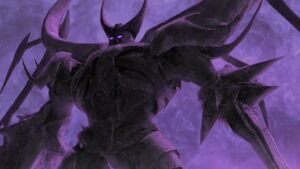 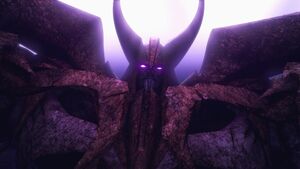 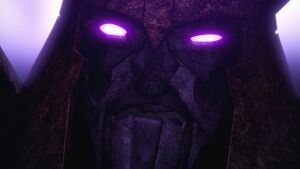 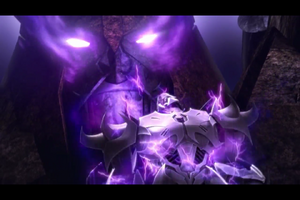 Retrieved from "https://villains.fandom.com/wiki/Unicron_(Transformers:_Prime)?oldid=3345815"
Community content is available under CC-BY-SA unless otherwise noted.