Make the U.S. a theocracy (succeeded).

Theocratic Oppressors
The United States of America is a theocratic power in the dystopian future of the Escape from LA film.

The United States had experienced an explosion of crime in the late 1980s, an increase in violence of 400% by 1988. Which leads to the establishment of the United States Police Force (USPF) in 1991 and the transformation of the island of Manhattan into the national prison. Sometime during the late 1980s or early 1990s, the United States, Soviet Union, and China fought against each other in World War 3. A conflict which apparently did not destroy either of the combatants as after the end of the war, a new Cold War began.

Within the United States, the people had to contend with a brutal and sadistic USPF. Ex-special forces specialist and war hero Snake Plissken experienced that first hand with the murder of his parents. He was caught by the USPF in 1997 and forced by the federal government to infiltrate the prison island to rescue the president who had bailed out from Air Force One in a pod after it had been taken over by terrorists. He rescued him from the ruling crime lord, The Duke and afterwards humiliated the president. Before long he was once again being hunted by the USPF.

A few years later in 2000, the city of Los Angeles was hit by the Big One. Most of the city was destroyed and submerged by the sea, though part of it remained as an island. A Christian fundamentalist had previously claimed that God would punish Los Angeles for being the new Babylon. After the Big One, he was elected president of the United States for life. The president moved the capital from Washington, D.C. to his hometown in Lynchburg, Virginia.

Under his regime the United States became a theocratic dictatorship. A series of laws for a new "Moral America" were passed which banned non-Christian religions, atheism, tobacco, red meat, alcohol, guns, profanity, and non-marital sex. If you broke the new laws you had one of two choices, be deported to the island of Los Angeles (which is run by gangs and psychopaths) and being executed via the electric chair.

The United States had hostile relations with the developing world, specifically Latin America and was facing an invasion from a South American armada in the Caribbean and a smaller one from the gangs in the island of Los Angeles. Which would mean that the American military had either degraded to such a point that the Third World posed a legitimate existential threat or that the military power of South America had grown by leaps and bounds by then.

13 years later in 2013, Snake Plissken was caught by the USPF and forced to once again into a suicide mission. This time to infiltrate the island of Los Angeles, retrieved the remote control for the United States' ultimate weapon (a network of EMP satellites), and kill the president's daughter who had become a follower and lover of Cuervo Jones of the Shining Path (and warlord of the island). He was able to retrieve the remote control but spared the daughter.

Upon his return to the mainland, the U.S. president threatened the world with its EMP satellite network, demanding that they submit to the United States. Only to discover that Snake Plissken had not gave him the remote control and thereby being humiliated live on television. Snake Plissken then used the remote control to detonate the whole network of satellites which shut down all technology in the world. Providing him with the means to escape the USPF and putting an end to the dictatorship.

The USPF is the paramilitary national police force established by the federal government in 1991, which from the beginning was known for its sadism and brutality. At first it's function was simply law enforcement and preventing the criminals from escaping the island of Manhattan which had been turned into America's biggest federal penitentiary for the worst of the worst. Under the Christian dictator, it became a tool of the police state, acting as its soliders and law enforcers within the country. 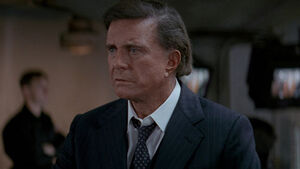 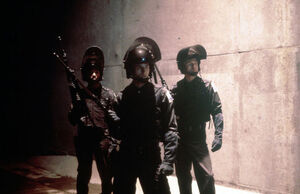 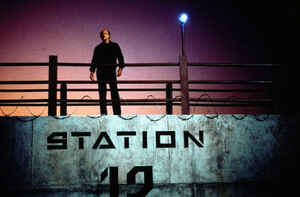 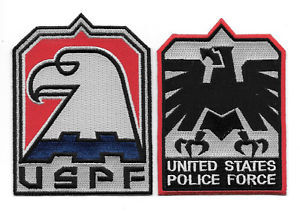 Add a photo to this gallery
Retrieved from "https://villains.fandom.com/wiki/United_States_of_America_(Escape_from_New_York)?oldid=4089083"
Community content is available under CC-BY-SA unless otherwise noted.