Keep the population pacified (both succeeded).

The United States of America is a fascist police state in the dystopian future of Stephen King's novel The Running Man.

By the year 2025, the global economy has collapsed and the United States has become a totalitarian police state. Ben Richards is a man whose family lives in poverty and out of desperate need of money to buy medicine for his daughter, tries out for a chance to compete in one of the violent game shows on the government controlled television station, the Games Network.

He is selected to participate in The Running Man, its most profitable, dangerous and popular game show. He meets The Running Man's director Fred Victor, presenter Bobby Thompson, and executive producer, Dan Killian, the latter of whom explains the rules to him. The contestant is declared an enemy of the state, and must simply stay alive for thirty days, being hunted by a team of mercenaries known simply as "the Hunters". For every hour he stays alive or evades capture, he earns $100. He also gets $100 for each Hunter or law enforcement official he kills, and if he survives the full thirty days, he gets $1 billion. Viewers themselves can earn money by informing the Network of the runner's location.

Richards is given $4,800 and told he can run to anywhere in the world, but must videotape two messages each day and send it back to the studio. If he fails to do so, he will stop accumulating money, will be in default of the contract, and will be hunted forever. No contestant has ever lasted the full thirty days without being either captured or killed, and the crew believes that no one will ever survive.

Richards travels to New York City, then Boston, and afterwards New Hampshire, evading and fighting Hunters and police officers. In the process, he learns that the government uses the media as a propaganda tool and the game shows as a 21st century form of bread and circuses to keep the population pacified. Richards then heads to Maine, and afterwards commandeers an airplane with two hostages on board (a woman, Amelia Williams and lead Hunter, Evan McCone). While in flight, Killian offers him a contract to become a hunter as he has broken The Running Man's survival record.

To convince him to take the offer, Killian reveals that while he was training for the Games Network's shows, criminals broke into his residence and murdered his wife Sheila and their daughter, Cathy. With nothing left to live for, and wanting revenge for his family's demise, Richard then tells him he accepts, after which he kills the crew and McCone, though the latter mortally wounds him. Richards lets Amelia parachute out of the airplane, and then pilots the aircraft into the Games Network's skyscraper in a kamikaze attack. Both Richards and Killian are killed and the fire rains down as far as twenty blocks away.

In the year 2017, following a global economic collapse, the United States becomes a totalitarian state. All cultural activity is censored and the population is kept pacified by a 21st century version of bread and circuses, game shows broadcast by the ICS media company in which convicted criminals must fight for their lives. The most popular of the shows is The Running Man. In it, the "runners" have to evade the "Stalkers" (armed mercenaries), failure being death at their hands and success apparently meaning a pardon by the state. The arena itself is an abandoned part of Los Angeles which has been cordoned off and converted into the stage. Hosting the show is the ruthless Damon Killian.

Ben Richards, a police helicopter pilot who was framed and made the scapegoat of the massacre of a food riot in Bakersfield, California, escapes a labor camp with several others including two resistance fighters. Declining to join the resistance he attempts to contact his brother who he discovers was taken for "re-education". He tries to flee to Hawaii, using ICS employee Amber Mendez, but is caught at the airport.

Richards is recaptured and coerced into participating in The Running Man. Along with the two resistance fighters and Amber, they are forced to fight for their survival in the game show. The two resistance fighters end up being killed by the stalkers, who in turn lose three of their number to Richards himself; this is the first time that Stalkers have died during the show's history. Richards and Amber discover a resistance cell in the arena, who hack the ICS transmission to reveal the truth to the world. Among the revelations transmitted to the world is that The Running Man game is rigged, and that the previous years supposed "winners" were actually murdered, to ensure that nobody other than Killian wins.

Richards and Amber then lead the resistance cell in the infiltration and take over of the ICS building. In the process, they do battle with the security forces who, in turn, fire indiscriminately on the civilian audience, all of which is being transmitted live to the world. Amber encounters the surviving stalker who attempts to violate her, leading to his electrocution. Richards forces Damon Killian into the rocket sled that serves as the entrance to the set, and launched him into the arena, where he crashed and died. 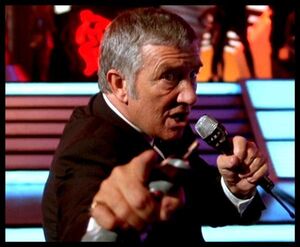 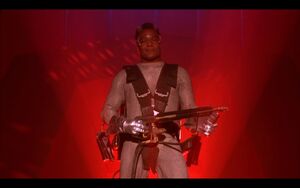 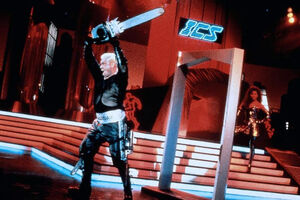 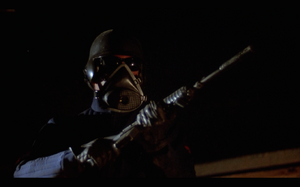 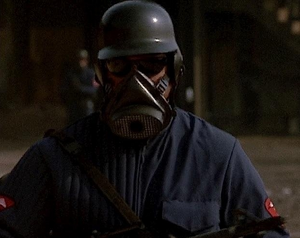 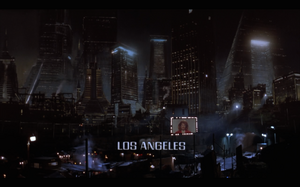