To consume all planets it comes across (failed).

Planet-Eater
Universo is a villain in the Savage Dragon comics. He is a large alien that devours planets and as such is a homage of Galactus - though his physical design is more in commonn with a Celestial.

Universo was a comsmic deity of unknown origins and has a herald named Mother Mayhem who had been helping him devour worlds for eons. He came to earth to devour it but was stopped by the Dragon who then he since battle numerous of times.

Universo is a giant alien with many abilities such as super strength speed and durability as well as the ability to devour planets. Has the ability to absorb the mass of a planet with power cosmic. 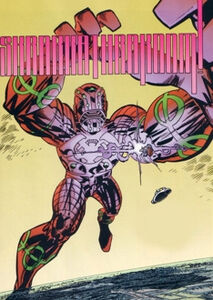 Add a photo to this gallery
Retrieved from "https://villains.fandom.com/wiki/Universo?oldid=3398057"
Community content is available under CC-BY-SA unless otherwise noted.