Raping Diclonius and other children.

Win a bet with Kakuzawa to capture Lucy and have power in his new world. (failed)

The Unknown Man is a character in the Elfen Lied series. He appears only in the manga.

His name is a fan-derived one, but it seems to be universal. A master hunter and assassin, he is also a sadistic pedophile and child molester who absolutely revels in the pain he brings.

At first, he appears to be relatively civil and gentlemanly, but he soon reveals his true colors as one of most cruel and evil, otherwise the most evil, in the entire series.

His appearance in the series is brief but intensely memorable, again even allowing for the rest of the series.

An immensely depraved individual of unknown origin, lacking any remote backstory or even a confirmed name. The Unknown Man had proved to act with a rather civil attitude towards his client, although this soon faded away to show the monster he really was underneath. If his unsavoury attitude did not suffice, he quickly dissolved even further from a ruthless assassin to a sadistic child predator, who was willing to rape and torture several Dicloni, later doing the same to an unnamed Dicolnius girl who he turned into a living tracker that was barely clinging onto life. He also showed to be highly arrogant and confident in his own capabilities, as he made a sexual wager with Arawaka in believing that his success was confirmed from the very beginning.

Despite this, the Unknown Man also had a cowardly side towards his personality when his situation became more clear, and was even willing to defend Lucy against Bando during their fight on the beach, going as far as to offer to act as her eyesight. Although this was undoubtedly a false act of self-preservation to save himself from harm, or rather his manhood which he chose to foolishly bet. His attempt at saving himself by feigning a sudden change of heart however ultimately costed him his own life.

He first shows up in Director Kakuzawa's underground grotto at the island facility as the Director confers with his transformed daughter, the Oracle/living computer Anna Kakuzawa. Both he and the hapless scientist Doctor Arakawa are tasked with finding and recapturing the Diclonius Queen Lucy once and for all. Enormously cocky and confident in his abilities, Unknown Man makes a wager with Arakawa as to which one will find and capture Lucy first : his victory will make her his sex slave; hers will cost him his manhood, which he will then have to wear on a chain around his neck.

Arakawa later learns that Unknown Man has free run of the Diclonius girls kept at the facility, and that he has brutally raped quite a few. He targets one more, a girl known only as Number 28, and then proceeds to inflict one of the most horrific fates in the series on her. She is surgically cut in two, with her lower torso taken entirely, her vocal cords cut, and a pain generating device implanted so that her vectors cannot be used, this, even though she had never shown evidence of this ability. More, another device attached directly to her nervous system effectively makes her a living locator for other Diclonius. Placing her body and a life-support system (even with which, she would not have lasted half a week) inside a back-held carrying satchel, he was certain Lucy would soon be in his grasp.

His search took him to the mainland in the nearby city of Kamakura and took him to Maple House. But not only was Lucy not home at this time, but Unknown Man's locator would never have worked if she had been. At this point in the series, Lucy's horns had been taken away during the battle. While this would leave most Diclonius comatose or kill them, this loss instead ensured the long-term dominance of Lucy's gentler, more loving personality called Nyu, who also grew more mature and coherent than her former infantile self. In fact, at this exact same time, Arakawa, doing research into an Anti-Diclonius birth vaccine at the university offices of her old boss, the Director's late son Professor Yu Kakuzawa, ended up coming far closer than her foe ever did to catching Lucy. However, thanks to the quick thinking of Nyu's friends and hosts, Kouta and Yuka, Arakawa panicked when she realized the 'hostage' she held was Lucy herself (at least in body, her mind was Nyu's). With this failure, Arakawa prepared herself to become the plaything of this monster.

Sadly, though, the locator found the second Diclonius resident of Maple House, the Silpelit-Class Nana. At home with her was Mayu, a once-homeless girl who became essentially the adoptive ward of Kouta and Yuka, and her "friend", the small dog she named Wanta. Entering the home, Unknown Man was immediately enraged that he had located another Diclonius by accident. He slammed down the satchel holding Number 28, killing her, though at this point it was an unwitting mercy. He then used a specialized crossbow which fired a neurotoxin-tipped spiked steel ball into Nana, disabling her. He then turned his sick attention to Mayu, stating a desire to 'play' with a Human girl for a change. Mayu, who had been raped by her own stepfather and had her biological mother reject her, at first froze as those memories returned, but then fought back, only to see Wanta attacked and herself threatened with not only rape, but disfigurement. To add insult to injury, the monster insulted her figure and body measurements while he began to undress her.

But every bully and monster is also able to feel incredible pain, as Unknown Man proved when tough-as-nails soldier Bando emerged, having been called by Mayu. Bando kicked the attacker in the head, and began to pound on him mercilessly, till a distraction by Mayu let the Unknown Man grab his crossbow and fire a spiked ball into Bando. Bando, however, used his cybernetic hand to remove the ball, which he then shoved up the Unknown Man's anus. From Joker to Wile E. Coyote in one heartbeat, the Unknown Man ran off screaming and yelping, unable to reach the ball, let alone pluck it out.

Unfortunately, Bando saw Kouta, Yuka and Nyu return from school, immediately recognized Nyu as Lucy, and shot her. A quick reversion to Lucy saved her, and the pair agreed to meet on the Enoshima beachfront to settle their feud. Bando, despite his obsessive quest and his anger at Mayu for keeping Nyu's presence a secret from him, agreed to give Number 28 a decent burial.

On the beachfront, dealing with his wounds and defeat, Unknown Man saw Lucy and Bando begin their fight. Bando, who had prepped the beach as a staging ground for his rematch with Lucy, more than once nearly had her. One such opportunity was blown when Unknown Man, in a strange reversal, acted tenderly towards Lucy and begged that her life, so important to the plans of the Kakuzawas, be spared. Lucy, denied throwable objects on the beach by Bando's meticulous planning, showed her regard for Unknown Man by cutting off his head and throwing the head at Bando.

His crossbow and its specialized ammo had been confiscated by Bando to use against Lucy. After Bando was again defeated and seemingly killed by Lucy, neither his body, that of Unknown Man, or the specialized crossbow were found on the beach only a few hours later. The crossbow ended up being used by an Agent of the Japanese government's anti-Kakuzawa task force, which both Bando and Kurama had associated with, suggesting that both bodies and the weapon were confiscated by this organization.

Like much else concerning him, Unknown Man's origins and backstory are not even hinted at. One possible clue lies in the dialogue of his referring to the new emergent Diclonius species as 'We'. It seems from this that he might have been a member of the Kakuzawa clan, which falsely believed itself to be Diclonius as well.

His attack and the consequences thereof scattered the Maple House 'family', which reunited just in time for a bloody home invasion by Kakuzawa's forces, tipped off by Arakawa, the winner of the wager, who was greatly relieved to hear of his death. Director Kakuzawa himself had no on-panel reaction to the man's death, but this was not out of character for Kakuzawa, even if the man had been a relation. For all the fear, pain, and death he caused, Unknown Man was in the end as disposable to both Kakuzawa and Lucy as any of the other unnamed soldiers in Elfen Lied. 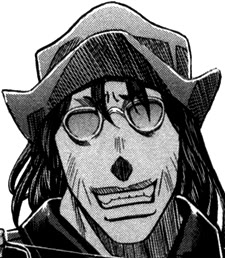 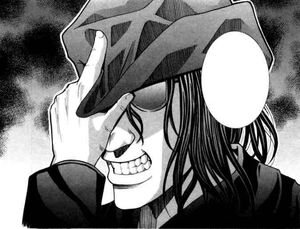 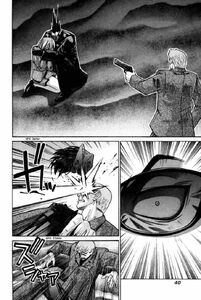 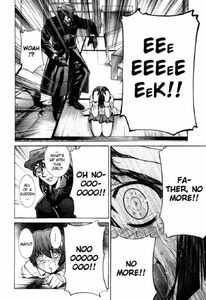 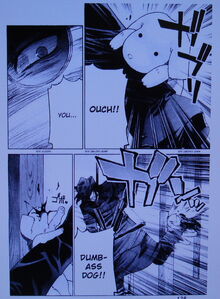