Zebra Jasper, also known as the Corrupted Jasper Fusion or better known as the Unknown Quartz Fusion, was a fusion gem and a minor antagonist in the animated series Steven Universe. The gem is a fusion between Jasper and one the Great North Gem Monsters and debuted in the episode "Earthlings". Due to Jasper fusing with the corrupted gem, this ended up corrupting her and she became a corrupted gem shortly after.

Zebra Jasper has dark orange-yellow with mahogany patches all over the body as a result of the corrupted gem monster. She has long light-ivory/dark white colored hair which comes from Jasper that extends down to the midriff. The gem has four arms and has horns all over its body with Jasper's face and sharp teeth.

Zebra Jasper's personality is unknown due to the short amount of time it had, but it appears to have been very unstable and violent being a fusion between Jasper and a corrupted gem. The gem appears to lack any form of strategy as shown between the fight between the gem and Smoky Quartz where it charged straight at her and without any strategy. This may stem from the lack of self-awareness and control that the corrupted gem had and how it couldn't cooperate with Jasper's tactical mind.

In the Beta Kindergarten, Amethyst, Steven, and Peridot had spotted Jasper and found out where she had been keeping her collection of corrupted gems and how she had them caged in the spots where other Quartz soldiers had previously been made and came out of. After a fight between Amethyst and Jasper with Jasper getting the upper hand, Steven and Amethyst fused to create Smoky Quartz and they began to beat back Jasper. In a desperate attempt at victory, Jasper ended up fusing with the blue north gem monster and formed the unknown quartz fusion. She began to attack Smoky and had a brief period of victory, but was easily and quickly overwhelmed, defeated and defused shortly afterwards, which led to Jasper's corruption.

The exact full-range of abilities is unknown but Zebra Jasper appears to be very strong judging by its size and how physically strong both gems are. The fusion also has sharp claws which came from the corrupted gem and was very strong. 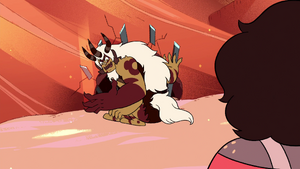 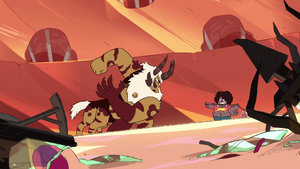 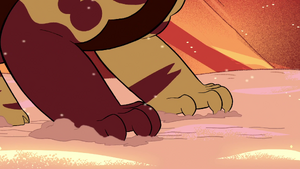 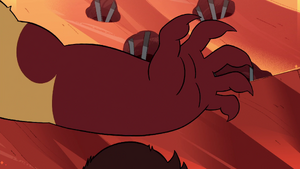 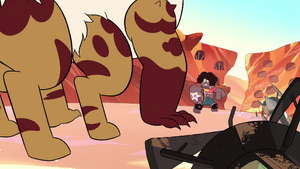 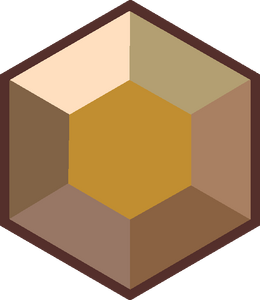 Jasper's Gemstone
Add a photo to this gallery

Retrieved from "https://villains.fandom.com/wiki/Unknown_Quartz_Fusion?oldid=3600822"
Community content is available under CC-BY-SA unless otherwise noted.