Guard of the Endless Mode

Unknown Specimen 5, also known as Lisa, is the final guard of the Endless Mode of Spooky's Jump Scare Mansion.

Lisa appears to be a female with very pale skin, long dirty brown hair, and a dirty dress. Her head is laying on her shoulder, while her face is frozen with a wide grin on her face. One of her eyes is missing, while the second one is white. Her body stays calm, while her head and neck shake rapidly when chasing the player.

"You cannot dream without darkness.
You cannot wake without pain.
Tear off your foolish disguise." 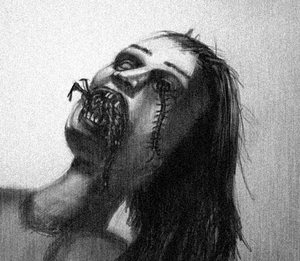 Lisa's death screen.
Add a photo to this gallery

Retrieved from "https://villains.fandom.com/wiki/Unknown_Specimen_5?oldid=3845566"
Community content is available under CC-BY-SA unless otherwise noted.